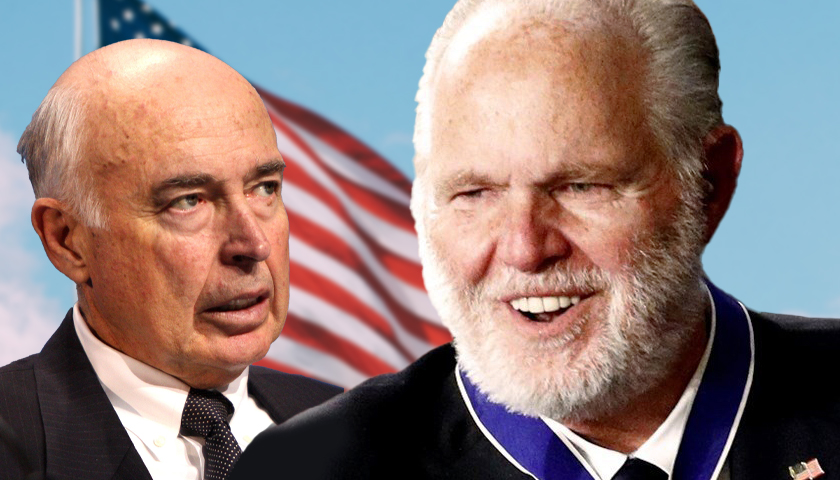 The February 17 departure of Rush Limbaugh got the most attention, and deservedly so. To instruct and entertain simultaneously is a tough task, and Limbaugh performed in fine style. There may never be another.

That description also applies to Angelo Codevilla, who died at 78 on September 21. His “remarkable intellect and insights,” were on full display over a long and productive career. For his many readers, and those who didn’t know him at all, the brilliant scholar might have saved the best for last.

Born on May 25, 1943, in Voghera, Italy, Angelo Codevilla came to the United States in 1955 and became a U.S. citizen in 1962. The eager immigrant earned degrees at Rutgers, Notre Dame, and Claremont Graduate School and taught at Georgetown, Stanford, and Boston University. Along the way, Codevilla served in the U.S. Navy, as a foreign service officer, and a staffer on the Senate Intelligence Committee.

A keen student of Machiavelli, Codevilla found the so-called intelligence community inept and ineffective. Codevilla was also a critic of the “war on terror,” as conducted by the administration of George W. Bush. The purpose of war, as one of Codevilla’s books explained, was To Make and Keep Peace. By disregarding that principle, the author argued, Bush left the nation in even greater peril. See especially his “Epitaph for the War On Terror,” published on September 14, days before the car accident that claimed his life.

Codevilla authored the brilliant, The Character of Nations; but the book that gained the most acclaim was his shortest. Back in 2010, he wrote an essay on “America’s Ruling Class” that so impressed Rush Limbaugh that the conservative radio host read the whole thing on the air. Codevilla duly expanded the essay into The Ruling Class: How They Corrupted America and What We Can Do About It, with an introduction by Limbaugh. As Codevilla kept careful watch, the ruling class morphed into an all-out oligarchy deploying white coat supremacist Dr. Anthony Fauci. Codevilla called out Fauci as a “deep state fraud,” and that kind of candor will be hard to replace.

In similar style, there are few understudies for famous actors who made their final exit in 2021. Born in Harlem in 1924, Cicely Tyson rose from fashion model to off-Broadway actress before gaining a role in The Heart Is a Lonely Hunter. Tyson’s performance in Sounder earned an Academy Award nomination and she bagged two Emmys for The Autobiography of Miss Jane Pittman. As her IMBD profile explains, Cicely Tyson “is without doubt one of the most talented, beautiful actresses to have ever graced the stage and screen.”

Actor George Segal, equally adept at comedy and drama, was absent from some lists of celebrity deaths in 2021. Millennials might check him out in “Who’s Afraid of Virginia Woolf?” which earned Segal his only Oscar nomination. He outlived co-stars Sandy Dennis, Elizabeth Taylor, and Richard Burton.

In sports, “Hammerin’ Hank” Aaron, who surpassed Babe Ruth’s home-run record without the aid of steroids, and against a tide of racist hatred, took his final at-bat in 2021. Consider also golfer Lee Elder, in 1975 first African American to play the Master’s, but not on the basis of tokenism.

Elder won the 1974 Monsanto Open and earned an invitation to tee up at Augusta National. Elder missed the cut but he was hardly alone. Unlike many other pros, Elder logged four victories on the PGA tour and developed a scholarship fund for women’s golf at Paine College. As Jack Nicklaus said, “the game of golf lost a hero in Lee Elder.”

On the music side, the nation lost a great artist in pianist Chick Corea. Should that be doubted, check him out on Fats Waller’s “Jitterbug Waltz” and his solo performance of Antonio Carlos Jobim’s “Desafinado,” released last year. Jazz is Jobim, blues is Jim Beam, and then there’s rock and roll, previously known as rhythm and blues.

Back in the 1950s, Louisiana crooner Lloyd Price rocked the charts with “Stagger Lee” and “Personality.” Price also created record companies and owned radio stations, “a very smart man” as his longtime manager said. Mr. Personality passed away in May at 88, outliving Chuck Willis, Chuck Berry, Jackie Wilson, Elvis Presley, and Little Richard, the true king of rock and roll, who crossed the river last year at 87.

Still rocking in 2021 is Jerry Lee Lewis, who gained fame in 1957 with “Whole Lotta Shakin’ Goin’ On.” Another survivor is Gary U.S. Bonds, known for hits such as “New Orleans” and “Quarter to Three.” The saxophonist on those records was Gene “Big Daddy” Barge, who also played on Chuck Willis’ 1957 recording of “C. C. Rider.” At this writing, Gene Barge is still around.

Jerry, Gary, and Gene also outlived the great Joe Hinton, who rendered what many regard as the best version of Willie Nelson’s “Funny How Time Slips Away,” with that stratospheric falsetto at the end. Time does slip away, but at this writing, the great Willie Nelson is still with us. Willie, Gene, Gary, Jerry Lee, all you cats, keep on rockin’ in the free world. This time next year, it might not be around.

If the great American nation that gave birth to jazz, blues, and rock is to remain free, we need more people like Rush Limbaugh and Angelo Codevilla. If others don’t pick up the torch, they won’t be resting in peace.

Lloyd Billingsley is the author of Hollywood Party and other books including Bill of Writes and Barack ‘em Up: A Literary Investigation. His journalism has appeared in the Wall Street Journal, the Spectator (London) and many other publications. Billingsley serves as a policy fellow with the Independent Institute.
Photo “Angelo Codevilla” by Gage Skidmore CC BY-SA 3.0 and photo “Rush Limbaugh” by Rush Limbaugh.