DeSantis Responds to Recent Spike of Omicron Cases in Florida 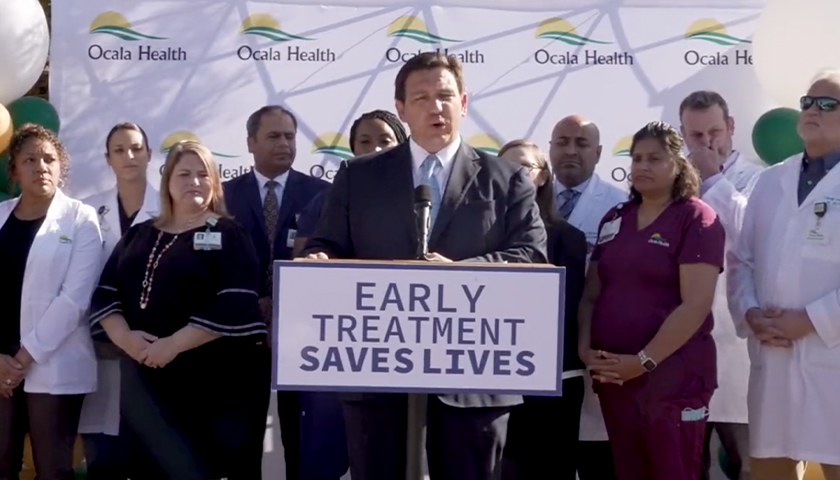 After months of COVID-19 cases declining weekly since the summer spike in Florida, the holiday season is experiencing a new spike in COVID cases due to the new Omicron variant that began Thanksgiving Day weekend and has increased into the month of December.

According to the weekly COVID-19 case report provided by the Florida Department of Health (FDOH), the 13-week continuous decline of cases ended on the weekend of November 26th through December 2nd when 10,875 new cases were reported  – a 1,234 increase from the previous week that recorded 9,641.

A week later, during the week of December 3rd through December 9th, the number of new cases recorded was 13,481, another slight increase.

However, last week’s case numbers from December 10th through the 16th exploded, more than doubling the previous week’s numbers with 29,568 new cases. According to the data, the three counties that represent about 64% of the cases in Florida are Palm Beach, Broward, and Miami-Dade, which reported 2,445, 4,770, and 11,689 cases respectively, totaling 18,902.

While the most recent report by the FDOH shows the epicenter of cases being in South Florida, Orlando 6 reported that the first case of the Omicron variant was at James A. Haley Veterans’ Hospital in Tampa.

In a response to the initial uptick of cases that happened during the beginning of December and to the arrival of the Omicron variant in Tampa, Governor Ron DeSantis stated:

“I have no problem if somebody is worried, if they’re scared of omicron, and they want to lock down or they want to isolate. That is absolutely their decision in a free society, but you don’t impose ‘Fauci-ism’ on the whole country or on the whole state. It’s wrong.”

In response to the increase in cases, Governor DeSantis highlighted – at a press event in Ocala – a newly approved emergency use monoclonal antibody treatment, known as Evusheld from the company AstraZeneca.

“In the clinical trials, it reduced the risk of developing COVID in the first instance by 77%,” DeSantis said. As opposed to previous monoclonal antibody treatments that were only for people with the virus, DeSantis also stated that, “This is for people that have not been exposed to COVID.”

Governor DeSantis – like he did during the summer spike of 2021 – said the recent spike is “seasonal,” and continued to highlight his stance on CDC mandates.

“We are not going to indulge in any of the insanity that you see starting to happen again in some of these parts of the country,” DeSantis said.

“You have universities in different parts of the country that force every student to do vax, force them to mask, probably force them to booster, and they’re still shutting down,” he added.

Casey Owens is a contributing writer for The Florida Capital Star. Follow him on Twitter at @cowensreports. Email tips to [email protected]
Photo “DeSantis on COVID-19 prevention” by Ron DeSantis.