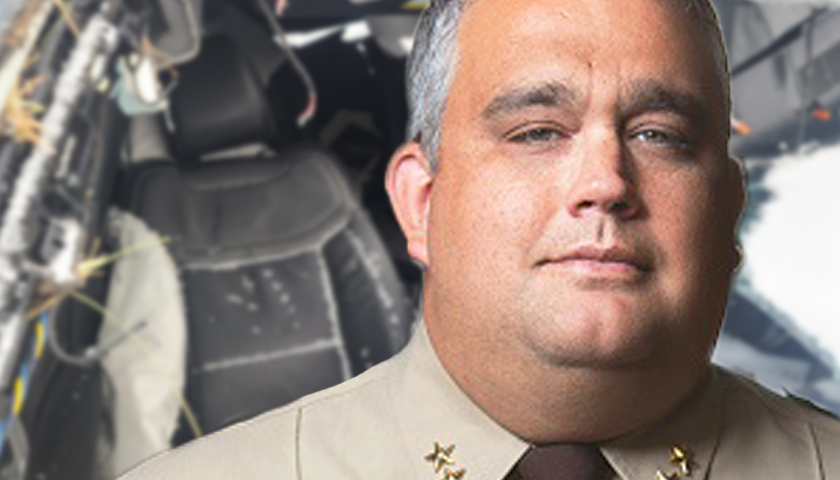 The Republican Party of Minnesota has called on Hennepin County Sheriff Dave Hutchinson to resign after he drunkenly crashed his county-owned vehicle outside of Alexandria earlier this month.

“As Hennepin County faces serious challenges with violent crime, residents need a sheriff who is laser-focused on public safety. Sheriff Hutchinson should step down and focus on his health so residents can have a top law enforcement officer better able to focus on fighting crime,” the party said in a statement.

Hutchinson rolled his vehicle off the road while traveling home to Minneapolis from a sheriffs’ conference. After the accident, his urine revealed a blood alcohol content of .13 — nearly twice the legal limit of .08.

He was reportedly “crawling along the road” after the Dec. 8 crash, according to police scanner audio released Thursday by photojournalist Rebecca Brannon. Brannon also published photos of Hutchinson’s mangled squad car.

According to Brannon, the vehicle came equipped with several customizations and cost taxpayers around $75,000.

Alpha News was also provided with photos of the crash scene, where an Alexandria man said he found 100 rounds of live ammo.

Hutchinson announced in a statement Thursday that he has pleaded guilty to a misdemeanor DUI charge. Hutchinson was also facing a charge for carrying a pistol under the influence of alcohol. The status of that charge is unclear, though some claim it will be dismissed.

“As Sheriff, I made the wellness of my staff a priority; however, I didn’t practice what I preached. This incident is a wake-up call for me. I understand the seriousness of my actions, for which I take full responsibility,” Hutchinson said.

The sheriff said he is now enrolled in an outpatient treatment program to address his issues with alcohol. He appears to have no intention of resigning, concluding his statement with: “I have returned to work and will focus on my duties as Sheriff.”

The Democratic sheriff was elected in November 2018 and received the endorsements of Gov. Tim Walz, Rep. Ilhan Omar, and the Minnesota DFL, led by Chairman Ken Martin. None of these officials have commented on the incident.

Under Hutchinson’s leadership, the Hennepin County Sheriff’s Office has stopped cooperating with federal immigration authorities and encrypted the police dispatch channels for 25 cities in the county, despite Hutchinson saying he wouldn’t.