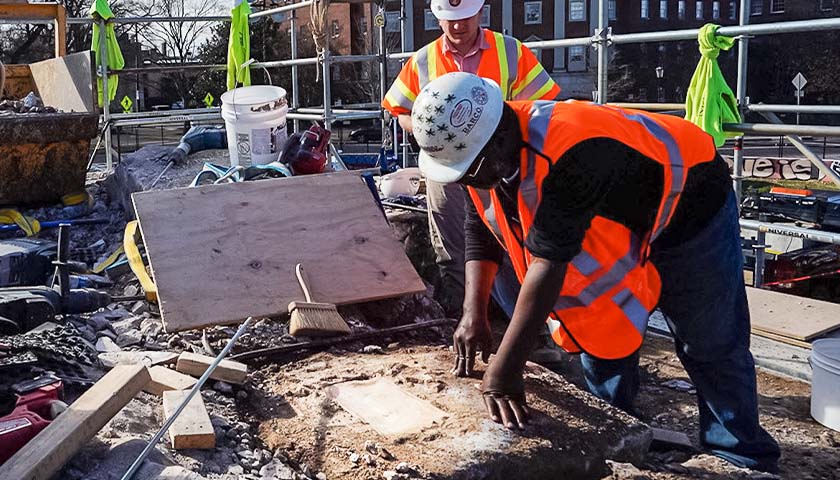 Crews dismantling the Lee Monument pedestal in Richmond found what they believe to be an 1887 time capsule believed to contain Confederate memorabilia and a possible photograph of Abraham Lincoln, the governor’s office announced Friday.

“Workers noticed something that looked ‘different’ this morning, so they chiseled down with a hammer and found the top of what appears to be the time capsule–located inside a large block, under one inch of cement. It was located approximately 20 feet in the air, in the tower, not in the pedestal’s base. It was located approximately 8 feet from the outside of the granite and about one foot from the edge of the core. It appears to be largely undamaged,” the announcement states.

Governor Ralph Northam ordered the removal of the monument in 2020, and crews finally removed it in September. At the time, they also tried and failed to find the time capsule based on location clues from historical documents, excavating a corner of the monument. A new time capsule was installed in the monument with modern memorabilia. The pedestal was left standing, as state and local officials worked on plans to reimagine Richmond’s Monument Avenue.

Set to be followed by a Republican, the outgoing governor ordered removal of the pedestal earlier this month. The pedestal and the Lee Monument will be stored. He ordered that the land be ceded to the city of Richmond. Finding the time capsule while completely removing the high-profile controversial monument will help Northam finalize his legacy.

Photos from the governor’s office show the stone containing the object being lifted out of the monument. The Richmond Times-Dispatch reported that the stone has been delivered to the Department of Historic Resources, who will open it next week.

Eric Burk is a reporter at The Virginia Star and The Star News Network. Email tips to eburk@vastarnews.com.
Photo “Suspected Time Capsule” by Governor Ralph Northam.