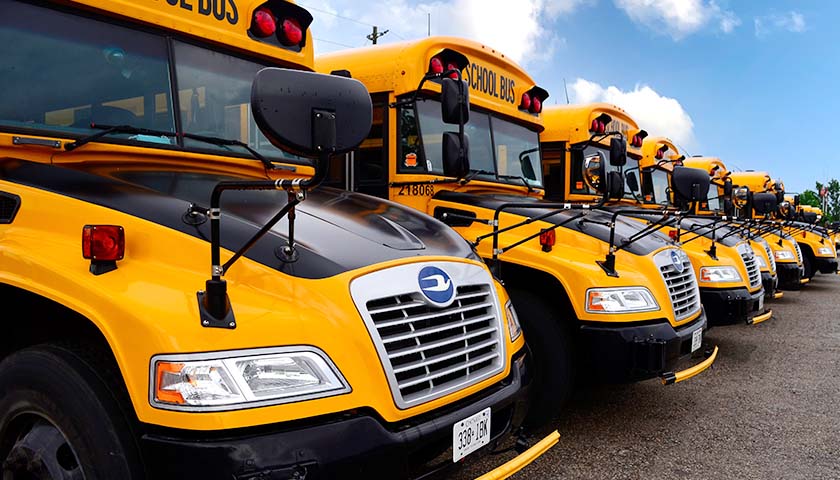 Between 2012 and 2019, student ridership on school district buses declined nationally by 3.8 million riders. The drop is owed to various factors, especially increased demand for drivers in private industry. The COVID-19 pandemic intensified the trend, via a combination of even more demand for drivers with Commercial Drivers Licenses and reluctance of older drivers to return to work after the shutdown. A nationwide bus driver shortage has been in the headlines this fall, with stories focusing on stranded students and; most dramatically, Massachusetts governor Charlie Baker called out the national guard to drive buses.

The decline of the yellow bus system presents an equity challenge for students. In a choice-based education system, lack of bus transport in certain areas means that children in those areas will have fewer schooling options. The problem will require an urgent effort to modernize. Nationwide, only about a third of students took buses to school in 2017, but in some states the figure is considerably lower – such as Arizona, where it had 23% by 2019.

A policy brief from the Arizona Charter Schools Association lays out the scale of the challenge. Arizonans finance yellow school buses through a separate property tax; charter schools are not included in the formula. The yellow bus system remained primarily focused on transporting students within attendance boundaries – even as families, through open enrollment and charter attendance, increasingly crossed those boundaries to get their children to school. A majority of Phoenix-area K-8 students attend a school other than their zoned district option. Lines of cars dropping off students at both district and charter schools are a common sight.

Allowing Arizona families to choose schools that they think are best for their children has produced substantial academic benefits. In the open-enrollment process, district schools both gained and lost students, and learning flourished. Between 2012 and 2019, however, Arizona’s district bus ridership dropped by tens of thousands of students. Long-term changes in the labor market created an acute shortage of district bus drivers – thus limiting some families’ educational options.

In 2021, Arizona lawmakers began the process of modernization by passing Transportation Modernization Grants. This competitive grant program allowed districts, charters, nonprofits, and local governments to submit proposals to spur innovative ways to transport students. In addition, the Arizona legislature created in-lieu grants, which allow district and charter schools to provide their per-pupil transportation funding directly to families to create their own transportation solutions rather than depending on transportation from the school districts.

Innovators are stepping up with solutions, too. Software firms have developed products to help schools create carpools. A majority of students nationwide reach their school in a personal vehicle; filling those empty private-car seats may be a big part of solving Arizona’s student transportation woes. Municipal bus systems could be optimized to help with student transport by adding stops. Specialized ridesharing firms have begun operating in Arizona with enhanced security for students.

University of Minnesota scholars evaluated a Minneapolis program that provides city bus passes to high school students and found that it reduces truancy while increasing attendance and grade-point averages. It turns out that the opportunity to catch more than one bus can make a significant difference. School leaders will need to flood the zone with solutions, most of which will not involve licensed commercial drivers.

Arizona’s Transportation Modernization Grants program and the in-lieu grants create the opportunity for educators, families, and community organizations to develop a wide range of solutions. A commitment to modernization will give all students the opportunity to gain access to the school best matching their needs and aspirations. We still need yellow buses, but the old system is no longer sufficient to serve the varied and diverse transport needs of a modern schooling system. Other states would do well to study Arizona’s approach.

Matthew Ladner is Director of the Arizona Center for Student Opportunity at the Arizona Charter School Association and Executive Editor of RedefinED. He is a contributor to RealClearEducation.