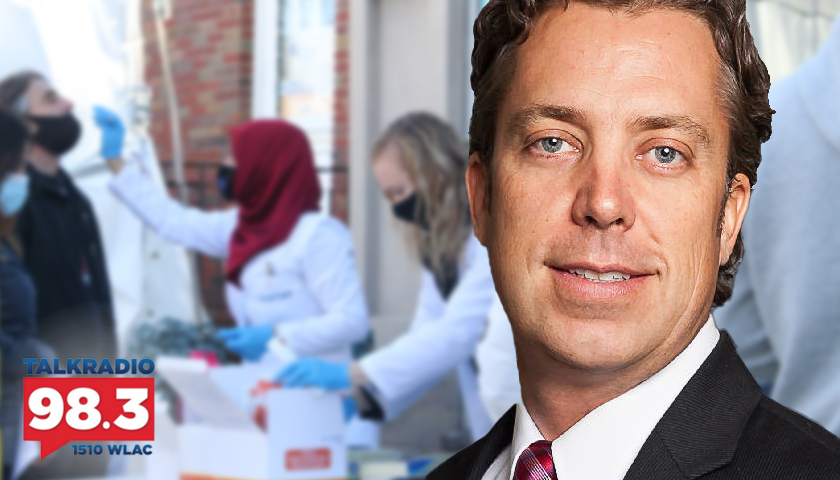 Leahy: We are joined in studio by our good friend Andy Ogles, mayor of Maury County. Andy, a couple of local stories of note here at the tennesseetar.com. Nashville Mayor John Cooper has announced an incentive for flu and COVID vaccination. Did you see that one?

Ogles: No, I’m going to tennesseetar.com right now to try to catch up.

Leahy: Nashville Mayor John Cooper announced a new incentive for residents to get their COVID vaccine and flu shot. Cooper tweeted earlier this week that anyone needing their annual flu shot or COVID vaccination could meet, wait for it…NFL alumni today, December 14th from 3:00 p.m. to 6:00 p.m. at Nissan Stadium. It’s not exactly like the free pizzas that they’ve given away in public schools in California to kids to get the vaccines without their parents’ approval. What do you think?

Ogles: I guess if you were going to get it anyway and it’s an opportunity to meet some of your NFL favorites, why not? But I mean, when you’re having to bribe people to take it, that should tell you something about the will and kind of the free market and the marketplace.

And we’ve gone past the level of absurd when there’s no data that you should be giving the vaccine to minor children. And yet there’s this push to vaccinate five and six-year-olds. They’ve got a 99.99 percent survival rate.

And now with the Omicron variant out there, which is very transmissible. But all indications are the symptoms are mild. This thing is breaking and hopefully will continue to dilute itself. And yet we’re pushing the vaccine. Unfortunately, I hate to be conspiracy-minded, but it follows the money at this point.

Leahy: This vaccine incentive at Nissan Stadium from 3:00 p.m. to 6:00 p.m. today, those attending will be able to meet retired NFL members and receive a holiday photo with the Titans mascot and team cheerleaders and be entered into a free raffle of NFL alumni signed footballs along with food and giveaway. NFL members attending include Chris Sanders, Neil O’Donnell, Al Smith. Two thousand one Titans are calling.

Ogles: There you go.

Ogles: Again, whatever. I think we’re all over COVID. You look at anecdotally the Christmas tree lighting there in Franklin had a huge crowd of I think it was 12 or 13 thousand. It should be noted that the Christmas tree lighting in Maury County had over 20,000. Ours was bigger than Franklin, but that bastion of freedom. I think people are ready to move on and get back to life. And I think what I’ve been preaching for a long time is COVID is here. It may become an annual event and we’ve got to learn to adapt and live with it and to keep life moving forward.

Leahy: Mayor Cooper loves incentives for people to get vaccinated. Earlier in the year, they partnered with American Airlines to refer to win. They had a program there. It explained that anyone receiving a COVID booster shot could write down the name of whoever recommended they get the booster shot and then be entered to win a set of American Airlines plane tickets.

You’ll have to wear mask, though of course, if you go on that airline. Once you won that there were over 300 destinations the winner could choose from. Yeah. Okay. The contest ran from November 8th to the 22nd. But the winners were never announced.

Leahy: They had another refer to win raffle which promised Nashville residents with prizes such as Predator season tickets, multiple different gift cards, and one-year memberships at local Nashville attractions.

Leahy: Now, Andy, have you been tracking this new Omicron variant?

Leahy: You know which letter proceeds it? Xi. They skipped that over. I wonder why?

Ogles: Well, because it’s the China virus, and they didn’t want to state the obvious.

Leahy: Can you imagine if it came out as the Xi variant? Because that was like the next Greek letter up for these variants.

Ogles: Yeah. Obviously, emergency management and aas County Mayor, the governor has vested a lot of authority with your County Mayor when it comes to public health. Then the General Assembly reaffirmed that authority during their special session.

And so, yeah, it’s something that I’m grayer because of. Following the data, talking to the doctors, there is hope in the medical community that the Omicron is the variant that ushers in the end of COVID as far as how lethal it is.

Leahy: The reporting is that it is not as nearly as lethal as the other variants. And also, although I did see a report that said it’s not confirmed that the first Omicron death in the United Kingdom has been recorded.

Ogles: That’s right. Yes, I saw that. Without getting into the pathology and all the others. But the Delta variant was much more aggressive. It particularly loved the fat cells in your lungs. Whereas when you look at your comorbidities in order, typically in the previous variants, it was heart disease, diabetes, obesity, and then pulmonary issues.

But with the Delta variant, there was an emphasis on obesity. And so you had individuals that were even mildly obese, were much more susceptible to extreme illness with Delta. And again, the protocols, the treatment, the therapeutics, all the things that doctors have, which really spurs a whole nother conversation.

You’ve got these nurses and doctors on the front lines giving everything they have to save lives. And then with these mandates through CMS, they’re suddenly discarded. Now, fortunately, the courts in Louisiana stepped up and said, we’re going to put a stay on this when it comes to forced vaccinations and firing our frontline workers.

But our nurses and doctors and CNAs and all these people working in our health care facilities are heroes, and they should not be discarded because they don’t want the vaccine. They’ve been working in this environment for almost two years without a vaccine. And now, as it’s waning, you’re going to fire them?

Ogles: So we have a county department of health, and it’s run by a board. I’m on it. I actually serve as the chairman. But just like Maury County, because of where we’re situated geographically, our infrastructure, our hospital is a regional hospital.

We serve nine counties, and our department of health serves much in the same way. So whether it’s AIDS treatments or TB clinics or some of those more significant illnesses that require much more in-depth treatments, they’ll come to our health department because we have this regiment and the capacity to handle it.

And so everything that we were doing in Maury County, both from a hospital side, which is county-owned, and the health department, which I’m the chairman of the board impacted more than just one county. It was impacting the entire Southern Middle Tennessee.

Leahy: How is the operation of the Maury County public health Department different from, let’s say, Davidson County because that’s one of the six that’s been independent.

Ogles: I can’t speak to the inner workings of Davidson County’s Nashville Health Department. But I can tell you that Andy Kenny, who runs the health department there in Maury County, has really done a stellar job.

When other counties, Williamson County, not to pick on them, we’re having trouble getting people signed up and tested, it was Maury County that filled the gap. I mean, we were having people in droves coming from Murfreesboro, Nashville, and Franklin because we had the ability and the facilities to test more people.

And so we really became kind of that stopgap where others were struggling. And then everybody came online. We were learning as we were going.

But that team there in Maury County, if you know anybody that works for the health department in Maury County, you need to give them a hug because they have done an amazing job these last two years.

Leahy: In Williamson County, the county basically owns the hospital.

Leahy: How many counties in Tennessee is a local hospital owned by the county?

Ogles: It’s becoming rarer and rarer as you see more consolidation with Vanderbilt. And there’s a big system out in East Tennessee that’s by rural hospitals and now one in West Tennessee. So I would say Williamson and Maury, especially the size that we both are, is more of a rarity these days.

Leahy: And do you see that continuing, the county ownership of the hospital in Maury County?

Ogles: Yes. I think so. Again, we serve nine counties. We have satellite hospitals and triage centers. It works well in rural America, and we’ve kind of figured out how to do it. And so, obviously, healthcare is a fluid industry, and the influences could change, that would change that. But right now, I see no end in sight for our ownership of the hospital.