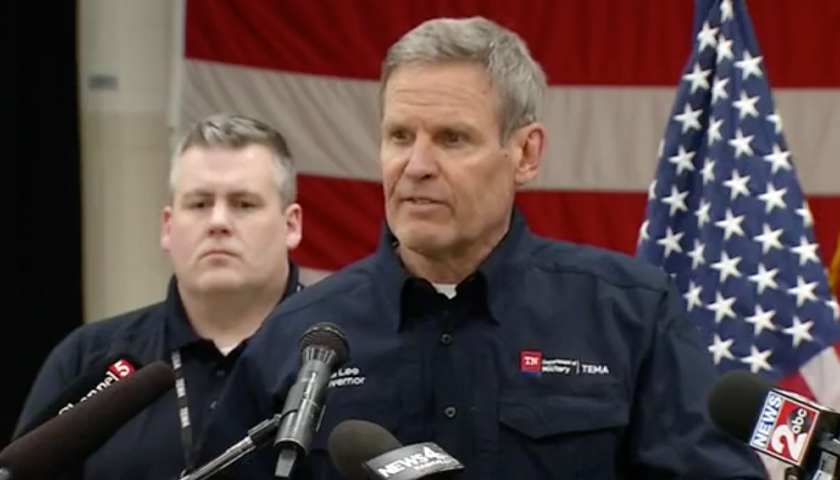 Governor Bill Lee held a press conference Sunday following the devastating tornadoes that ripped across the Tennessee. Damage spanned the state, and left a trail of destruction through parts of 19 counties, according to preliminary reports from the National Weather Service.

Lee’s remarks followed an aerial surveillance of the damage from the storms. He called it, “A very heartbreaking and difficult day for the state of Tennessee.”

The governor continued that there was extensive devastation in the areas that he toured. He said it’s been a difficult day for Tennessee, and neighboring states.

“We’re reminded that in just a moment,” Lee said, “lives are lost, livelihoods are lost, and lives are changed forever. And we saw that across our state today. It was a very difficult day.”

He then spoke about the immediate response from police officers, first responders, and from communities. “We saw it, like Tennesseeans do, to come alongside their neighbors. A great deal of hope in the midst of real devastation in our state.”

Alex Pelham, chief of staff at the Tennessee Emergency Management Agency, spoke next. He explained that through damage assessments they confirmed 79 casualties, including 4 fatalities, 1 person missing, 10 injured, and 64 that were considered “walking wounded.”

Pelham noted that at the time of the press conference there were 63,000 Tennessee residents without power. “With that, like I said, these numbers are going to be changing as we continue to work with our local partners and our other state partners to get more up-to-date information through damage assessments.”

“I want to add to that with those numbers of loss of life,” Lee said, “there certainly could have been much more, and one of the things we noticed today, and I just want to reiterate and remind people, there was a very strong warning effort in many of these communities.”

Lee explained that due to the notification of the danger, communities were able to evacuate and reduce the loss of life in the state.

According to the state Emergency Management Agency, Tennessee is at a level 3 emergency, which is described as “a serious emergency or minor disaster has occurred or a situation is deteriorating rapidly and public warnings are being issued.”

Morgan Nicole Veysey is a reporter for The Tennessee Star and The Star News Network. Follow her on Twitter. Email tips to [email protected]
Photo “Lee holds press conference” by Gov. Bill Lee.