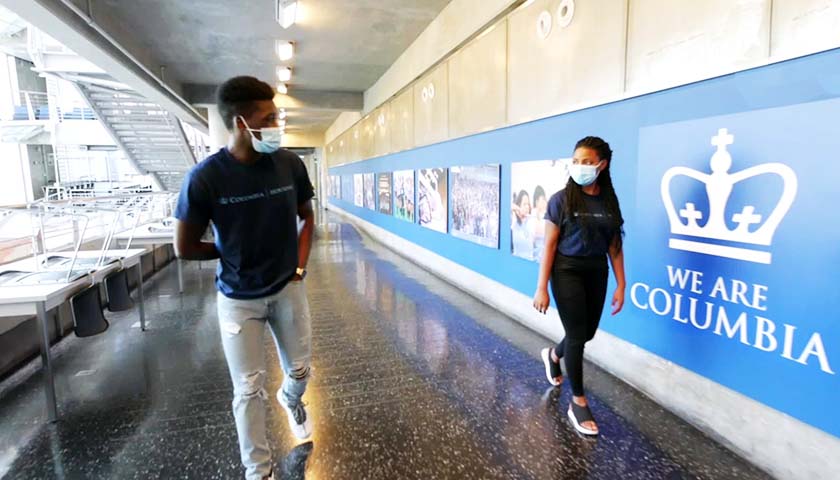 by Abigail Streetman ’22 and Alexa Schwerha

Amid ongoing calls for increased student-employee compensation, student protests at Columbia University Wednesday resulted in “physical harassment against faculty” and staff, according to an email obtained by Campus Reform.

“Yesterday’s Morningside campus protest by the Student Workers of Columbia-UAW included instances of physical harassment against faculty, students, and staff. These individuals were attempting to go to work, pursue their studies, or enter or exit their dormitories, and several incurred injuries when they sought to enter campus. No matter our differences at the bargaining table, violence has no place in this process, and we denounce these actions in the strongest possible terms.”

But also on Dec. 9, the Ivy League school gave in to the Student Workers of Columbia-United Auto Workers (SCW-UAW) union’s demands for increased pay.

SWC-UAW’s 2021 Bargaining Framework, which the group was advocating for during this week’s protests, included demands that totaled $140 million, according to Columbia Spectator.

The demands included higher payroll compensation of $45,000 and $35,500 for students on 12-month and 9-month appointments across all programs, which close in number to the Columbia’s Dec. 9 concessions.

The hourly rate is set to increase to $20 per hour in January 2002 and raise to $22 per hour by 2024. Dental plans and support funds were added to health benefit packages, and childcare subsidies for children under the age of 6 will rise to $4,500 with the intent of increasing to $5,000 the following year.

Students at Columbia University had been on strike since November 3 in protest of unfair wages for working graduate students employed by the school. The Student Workers of Columbia-United Auto Workers (SWC-UAW) have been negotiating with university officials for almost 3 years, and reportedly over 85 sessions.

In April of this year, Columbia signed a tentative agreement with the Graduate Workers of Columbia (GWC) Union that ended a previous series of protests on the same issue. This proposal was rejected by union members and resulted in the subsequent retirement of all 10 members of the bargaining committee.

A new committee has since taken over, and the union authorized the current strike in November following continued complaints over the slowness of negotiations. The union then filed unfair labor practice charges against Columbia with the National Labor Relations Board on Nov. 18.

According to Ethan Jacobs, a graduate student worker in the philosophy department at Columbia University and a member of the GWC-UAW Local 2110 bargaining committee, the lawsuit includes details about the university enacting a “wage freeze” after the first agreement was rejected, The Guardian reports.

Boyce urged the campus community in a Nov. 1 email, according to Columbia Spectator, to be patient and let the process play out.

However, students expressed anger this week on social media regarding Columbia’s hiring intentions, after another university email was sent outlining the school’s employment policies.

In a Dec. 2 email obtained by Campus Reform, Vice President and Chief Human Resources Officer Daniel Driscoll sent the following message regarding the hiring of those on strike prior to today:

“In order to plan coverage for the Spring term in a timely fashion, the following categories of student officers will receive their letter in the normal course:

(a) student officers who are currently working as shown by their attestations,

(b) students who are not currently on appointment, or

(c) student officers who are currently on strike but return to work by December 10, as shown by their attestation for the current pay period.

Please note that striking student officers who return to work after December 10, 2021 will be appointed/assigned to suitable positions if available.”

Many individuals tweeted out screenshots of the message.

On our 5th week on strike Columbia University threatens to take away our appointments next semester if we don't return to work by December 10. This jeopardizes our student status, our visas and livelihoods. It is illegal. But we will not surrender and we will win #CUonStrike pic.twitter.com/5bK0PtG3nV

Others posted videos or pictures showing the campus during the strike.

“As elected leaders from the greater New York City area, we are writing regarding the current impasse in labor negotiations between Columbia University and the Student Workers of Columbia-UAW,” the letter stated. “We urge you to recommit to negotiations in order to work out a fair deal.”

Today, I wrote to @Columbia encouraging it to bargain in good faith with grad student workers @SW_Columbia. Thank you to @RepGraceMeng & @RepEspaillat and others in the NY Delegation for joining and standing in solidarity with labor. #CUonStrike pic.twitter.com/tgPOOvhqrV

The protest occurred that same day, with a member of the union claiming that Boyce’s characterization of the physical harassment was false.

“The Provost just won’t stop lying to the university about our union @SW_Columbia and what we do,” the tweet read.

The Provost just won’t stop lying to the university about our union @SW_Columbia and what we do. Picketers were actively discouraged from physical contact with CU students and staff. We have also documented more than a dozen instances of violence against picketers. #CUonStrike pic.twitter.com/ToP0Kzo44z

New York Assemblymember Emily Gallagher expressed her solidarity with the Student workers, and progressive activist Lindsey Boylan stepped into the mix as well, with a video of herself at Wednesday’s protest.

Student workers are “simply asking that Columbia do the right thing,” Boylan emphasized, “I’m a graduate of Columbia University myself. And if Columbia doesn’t stand and do this, I’m not really sure what they stand for at all.”

It’s past time for @Columbia to provide proper labor protections for their graduate student workers.

The admin must end their retaliatory threats and give workers a fair contract, now. #CUonStrike pic.twitter.com/FH8mRIC8J8

A university spokesperson responded to Campus Reform’s email with the following statement:

“In the face of enormously trying circumstances created by the strike, our first priority is the academic progress of our students, particularly undergraduates whose classes are being disrupted. Sending the message last week to the union bargaining committee explaining the University’s approach to spring appointments and teaching assignments was necessary if we are to fulfill that commitment.”

Campus Reform reached out to the Vice President, Provost, the Student Workers of Columbia for comment. The article will be updated accordingly.

Abigail Streetman is a Florida Campus Correspondent with Campus Reform. She is a second-year student at the University of Florida, majoring in Biology and minoring in Innovation. Abigail is the UF Turning Point USA secretary, Gainesville Activism Hub president, and a member of College Republicans, Network of Enlightened Women, and Young Americans for Liberty.
Alexa Schwerha is a reporter for Campus Reform. She was the Regional Field Coordinator at Leadership Institute for Texas and New Mexico. She attends Kent State University and is studying Communication Studies and Political Science. On campus, she served on the executive board of the Kent State Turning Point USA chapter, founded Students for Trump at Kent State, and was the Campaign Liaison for the Kent State College Republicans.
Photo “Student Workers” by Columbia University in the City of New York.