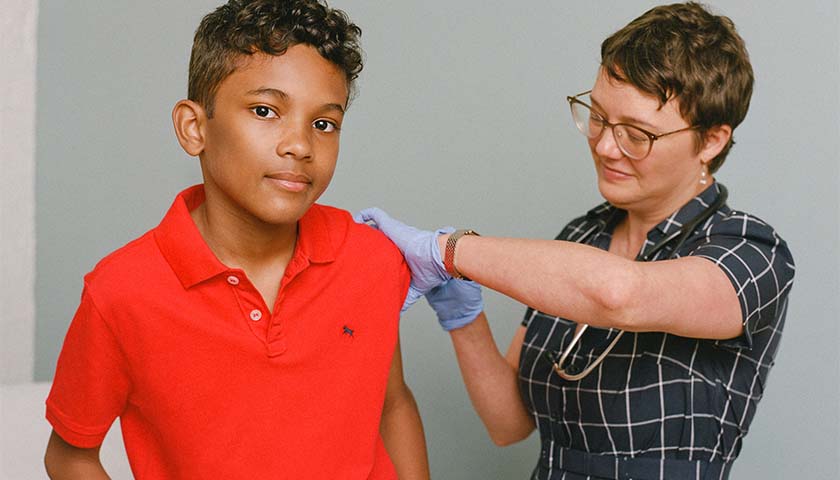 At least two parents have accused a prep school in South Los Angeles of vaccinating their children without their permission after bribing them with pizza, according to NBC Los Angeles. One distressed mother claimed that her 13-year-old son was told not to tell his parents after he was given a Pfizer COVID-19 injection at Barack Obama Global Prep Academy.

Maribel Duarte told NBC LA on Monday that her son recently came home from school with a vaccine card after he had accepted the jab. The boy told his mom that he agreed to get the shot after he was offered pizza. Duarte said that the woman who administered the shot and signed the form told her son not to tell his parents because she didn’t want to get in trouble.

“It hurt to know he got a shot without my permission, without knowing and without signing any papers for him to get the shot,” Duarte said. The mother explained that she isn’t anti-vaccine, and is vaccinated herself, but is wary of her son getting vaccinated because he has asthma, and allergy problems.

The Barack Obama Global Prep Academy is a part of the Los Angeles Unified School District (LAUSD), which saw enrollment drop by more than 27,000 (6 percent) at the start of the school year when the vaccine mandate was announced for kids over 12 years old.  The mandate goes into effect Jan. 10, 2022.

The district told NBC LA that it can’t comment on student matters, but it has been following a “safe schools to safe steps incentive program” that rewards vaccinated students with prizes.

A spokesperson for the school told Fox News that the school’s overall vaccination rate is over 80%, and vaccinations are “an essential part of the multi-layered protection against COVID-19” that enables students to stay healthy for in-person learning.

“Here’s the problem,” said attorney Jennifer Kennedy. “Kids in California cannot consent to vaccination.”  Kennedy, according to NBC LA,  has been following two cases against the LAUSD over the vaccine mandate that are currently making their way through court.

A school in LA gave students the vaccine without their parent’s permission after they bribed the students with pizza and told them not to tell their parents: pic.twitter.com/NMNpL5w3FE

LAUSD parents hosted a protest over the vaccine mandate on Sunday, setting up a locked gate prop “to symbolize an estimated 20,000 LAUSD students who will be forced to take online classes because they are unvaccinated.”

“They are being excluded, isolated, segregated and shamed and bullied for decision that isn’t even theirs to make,” Kennedy told KTLA5.

Appallingly, in at least two cases, officials at the Barack Obama Global Prep Academy apparently made the decision for students against their parents’ wishes.