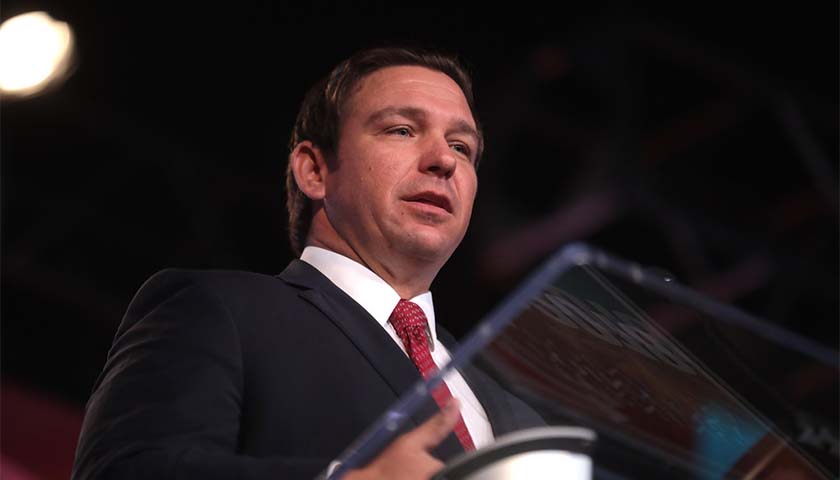 At a press conference in Oldsmar, Florida, Gov. Ron DeSantis (R) announced a statewide flooding resiliency plan and is asking lawmakers for millions of dollars of environmental spending. In total, DeSantis is seeking $276 million in proposed funding for 76 state projects within the Florida Department of Environmental Protection (DEP) as part of the 2022 Florida budget.

DeSantis said Florida is a state with flooding issues, and he’s just addressing the need for environmental infrastructure without “a bunch of left-wing things.”

“What I found is, people, when they start talking about things like global warming, they typically use that as a pretext to do a bunch of left-wing things that they would want to do anyways,” DeSantis said when asked about alleged rising sea levels and the root cause of “global warming.” “We’re not doing any left-wing stuff. What we’re doing, though, is just reacting to the fact that, OK, we’re a flood-prone state, we do have storms.”

He continued by deriding “ideology” and emphasized the need for more infrastructure.

“To be ready for those changes that will occur, we must continue to plan. We must be prepared for the possibility of those impacts,” Hamilton said.

In September, DeSantis also announced over $100 million for water quality projects, chiefly the Wastewater Grant Program as part of the Clean Waterways Act.

The projects are intended to reduce nutrient-rich waterways, which often lead to red tide and algal blooms.

“The Governor’s commitment and advocacy for water quality in our state has been unwavering,” said Hamilton back in September. “Today we are celebrating a suite of projects that will help prevent or reduce the amount of nutrients going into the Indian River Lagoon, to help reduce the frequency and duration of harmful algal blooms, help restore seagrasses, and protect marine ecosystems. DEP is proud to be a partner in these critical projects, and we look forward to continuing our collaboration with local governments to address water quality across the state.”

DeSantis has prioritized environmental policy and water quality issues more so than Republicans typically do, which reflects recent data from Florida Atlantic University that suggests Florida Republicans are approximately 40 percent more likely to believe in climate change than Republicans across the country.