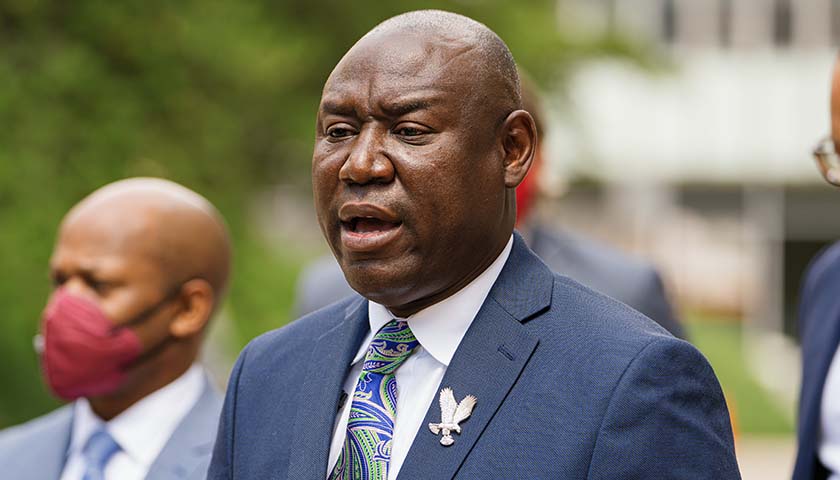 As Benjamin Crump continues to carve out his niche in the legal arena, it is time America recognizes what’s going on. The George Floyd attorney is not a crusader for justice, he’s an opportunistic race profiteer. More sophisticated than the local ambulance chaser—but ambitious in a similarly distasteful way—he scours news reports to find examples of deadly interactions between Americans he can miscast as a racist relics of a bygone era.

In this land of possibility, everyone is free to chart his own course. But what should we make of those who seem only to want to chart a course of decrying and disparaging America?

On March 12, roughly 10 months after George Floyd died during an altercation with Minneapolis Police officer Derek Chauvin, Crump took the stage to announce the record-breaking settlement he negotiated on behalf of the Floyd family. “That the largest pre-trial settlement in a wrongful death case ever would be for the life of a black man sends a powerful message that Black lives do matter and police brutality against people of color must end,” he proclaimed to the crowd.

The size of the judgment was indeed notable, but the timing of the announcement was even more so. It was announced during the Chauvin trial—likely influencing the final result. Touted as a step in the right direction by media outlets and politicians alike—the final haul was $27 million.

This has become a standard for Crump cases—denounce and collect. The family of Trayvon Martin received a settlement of over $1 million in a 2012 wrongful death lawsuit. Michael Brown’s family received $1.5 million. Breonna Taylor’s family? They received $12 million.

Although the lawyer often brags about his “undefeated” record, not every case goes as planned. The parents of Tamir Rice did receive a $6 million settlement but only after they severed their relationship with Crump following when they decided he was attempting to profit from their son’s death.

Setting aside the Rice family’s outcome, the model is clear: While money could not bring back a lost family member, multiple million-dollar payouts to those represented by Crump was a felicitous outcome.

But no one was as satisfied as Crump.

While Crump’s payments have not been made public, “America’s Black Attorney General” likely takes 30-40 percent of all the settlements he reaches for his clients (the industry standard for plaintiffs’ attorneys). To put that into perspective, for the four aforementioned cases (sans Rice), Crump could have taken in as much as $15 million. Not bad for a self-proclaimed “country lawyer.”

Crump’s results cannot be disputed but his tactics deserve scrutiny. Despite calling for “healing” and “justice,” he never shies away from an opportunity to divide. Proving the veracity of Aesop’s proverb that a man is known by the company he keeps, a frequent associate during these “settlement” demands is world-famous race-baiter Al Sharpton.

Named one of Time Magazine’s “100 Most Influential People” and celebrated by the media as an icon of black America, Crump regularly trades in the kind of incendiary statements that are unfair to America. He is also often accused of omitting key details or even fabricating false claims to increase the buzz surrounding the narrative of the latest alleged racist incident. See the Trayvon Martin case generally.

Recently, Crump took to Twitter to admonish officer Nicholas Reardon of the Columbus Police Department, stating: “@ColumbusPolice killed an unarmed 15 yo Black girl named Makiyah Bryant.” The only problem? Bodycam footage released almost immediately after the shooting showed Bryant lunging toward another young woman with a knife in hand. A gaffe? A mistake? Or is it another example of spinning a web of false information in order to demonize police and destroy race relations in the United States?

Just this month, Crump turned up in the middle of the Astroworld tragedy in Houston. A concert, which took place on November 5 and 6, was headlined by famous rapper Travis Scott. A powerful crowd surge left 10 dead and hundreds more injured. Crump has now filed over 200 lawsuits for individuals seeking remedies for various mental, physical, and emotional damages.

Will the dispute turn on the actual facts of the case or will he resort to race-baiting to score a huge settlement? If it is the latter, it will require an extra dose of racial flim-flam because Travis Scott—the primary target of these lawsuits—is also black.

America is a place of amazing possibilities. Have we made mistakes along the way? Yes. But we’ve also repented and improved. Today our behavior, our mindset, and our people are the greatest draw for immigrants from all over the planet. Shamefully, racial justice profiteers in our midst threaten the very justice, truth, and healing that America represents.

Horace Cooper is a senior fellow with the National Center for Public Policy Research and is the author of the soon to be released book “How Trump is Making Black America Great Again.” He is a contributor to American Greatness.
Photo “Benjamin Crump” by Tony Webster CC BY-SA 2.0.