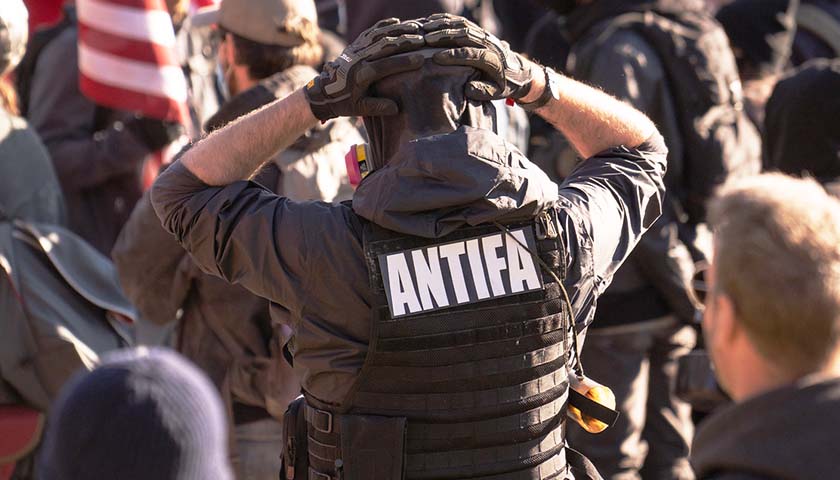 Pro-Antifa social media accounts are taking a victory lap this week following the announcement that the FBI has ruled out a political motive in the 2019 Dayton, Ohio mass murder of nine people, carried out by Antifa supporter Connor Betts. One of the victims was Betts’ sister.

Betts interacted with multiple Antifa-aligned accounts online, including the Socialist Rifle Association (SRA), a Marxist group whose members commonly provide armed support during Antifa actions. Betts himself attended Antifa protests while armed, and made statements calling for killing “every fascist” and urged his comrades to “arm, train, prepare” to oust Trump from office, according evidence unearthed by Andy Ngo, a journalist with a long history of covering Antifa violence. Betts can also be seen in images wearing Satanist and anarchist patches. Betts, dressed all in black and wearing a mask, opened fire on a crowd outside the “traditional western-themed bar” Ned Peppers, before being killed by police.

The FBI appears to have taken none of these known facts into account when it determined:

The evidence from the extensive investigation indicated the perpetrator, Connor Betts, was solely responsible for the injuries and deaths that were a result of his actions. He acted alone and was not directed by any organization or aligned to any specific ideological group.

The FBI instead emphasizes Betts’ apparent fascination with mass shootings of all types, even non-ideological ones, and highlights mental health issues, including obsessive compulsive disorder. It has nothing to say about the death of Betts’ sister either, or whether Betts was aware of his sister’s presence in the crowd.

It may be reasonable to say that Betts was not directed by any organization, though this is scarcely necessary for politically motivated terrorism in the 21st century. As has been the case, for example, among Islamic State terrorists, individuals often conduct attacks they know will win the accolades of members of groups with whom they are aligned, even though they may not have received direct orders.

Betts for example publicly uttered his approval of the attack conducted by armed Antifa member Willem van Spronsen, targeting a Tacoma-area Immigration and Customs Enforcement facility, only one month before Betts’ own shooting spree, calling Spronsen “a martyr.” It is worth asking whether Betts may reasonably have believed his own attack would be regarded in a similar manner by people he interacted with online.

It is also not clear if the FBI developed an extensive understanding of Betts’ nonpublic contacts, as it had struggled to acquire access to one of Betts’ many cell phones. Antifa is known to be heavily security-conscious and to use encrypted communications and “burner” phones.

Regardless, evidence that Betts aligned himself with ideological “anti-fascists” is uncontrivable and easily available. Unfortunately, the willingness of the FBI to blatantly ignore publicly available information about a perpetrator’s political motivations is equally well known. The FBI outraged congressional Republicans when it failed to identify progressive activist James Hodgkinson, who opened fire on Republican lawmakers during a practice for the congressional baseball game in 2017, as politically motivated, instead labelling his attack as a “suicide by cop.”

Like Betts, Hodgkinson had a substantial social media trail of political posts which the FBI deliberately ignored, in addition to a list of Republican congressmen on his person prior to the attack.

It is reasonable for the FBI to consider whether Betts’ mental health, use of illegal drugs, and other factors may have impacted his decision to conduct his murderous assault. What is not reasonable is the FBI’s insistence on ruling out, despite clear evidence, that Betts had an ideological affiliation with a known violent ideological movement, that he corresponded with groups from that movement on social media prior to the attack, and that Betts praised an armed attack by an individual affiliated with one such group only one month prior to his own murderous attack.

Unfortunately, the FBI continues to make clear that its assessments cannot be considered reliable when it comes to potential terrorist violence from perpetrators whose politics are deemed “left-wing.” This puts the FBI substantially out of step with other Western law enforcement and intelligence agencies, which do actively analyze the threat of left-wing terrorism.

The FBI has repeatedly downplayed the threat of “left-wing” violence in support of a politicalized narrative which recognizes only white-supremacist groups or America’s “right-wing” as a potential threat. Indeed, under the Biden Administration’s domestic terrorism strategy, mere adherence to beliefs ranging from objections to COVID vaccine mandates, to election integrity concerns, to opposition to critical race theory in public schools have all been identified as hallmarks of violent extremism, even when there is no evidence of membership in supposedly extremist organizations.

This being the case, local and state law enforcement should no longer be deferential to FBI rulings on the political motivations of perpetrators in cases which may have a nexus to terrorism. While the FBI has lead jurisdictions on terrorism cases in the United States, their refusal to assert a terrorism nexus should not dissuade local or state law enforcement from conducting their own investigations, and bringing state terrorism charges, where such legislation exists.

Kyle Shideler is the Senior Analyst for Homeland Security and Counterterroism at the Center for Security Policy. He is a contributor to American Greatness. You can follow him at @ShidelerK on Twitter.
Photo “Antifa Protestor” by Chad Davis CC BY 2.0.