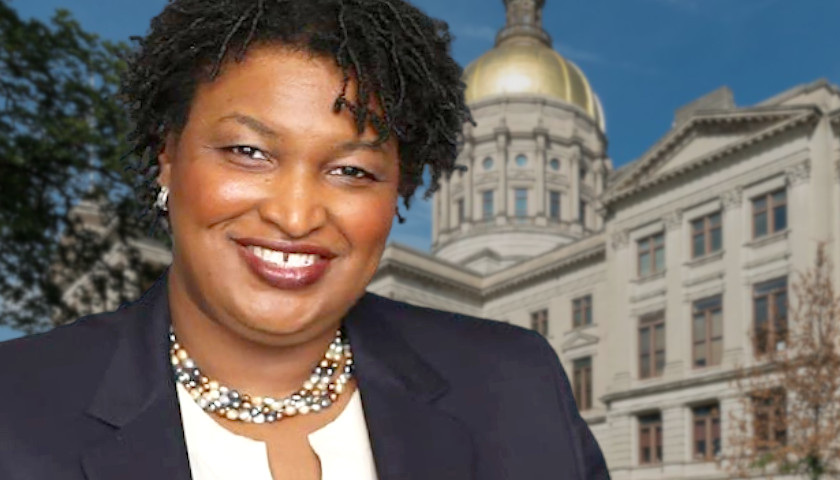 “On the night on November 16, when I acknowledged I would not become governor, that he had won the election, I did not challenge the outcome of the election unlike some recent folks did,” Abrams said on “The Rachel Maddow Show,” referring to former President Donald J. Trump.

“What I said was that the system was not fair. Leaders challenge systems. Leaders say we can do better. That is what I declared,” Abrams said. “I could not in good conscience say in order to protect my political future I’ll be silent about the political present, which is that we have a system under a leader that sought to keep people from casting their ballot that threw the ballots out that said that voter suppression was a viable tactic for winning elections.”

But after her loss, Abrams refused to concede the race to Kemp. Meanwhile, she paraded the state claiming that she had actually won the election.

“Despite the final tally and the inauguration [of Gov. Brian Kemp] and the situation we find ourselves in, I do have a very affirmative statement to make: We won,” she said at an event hosted by race-hustler Rev. Al Sharpton.

The media were happy to oblige Abrams with headlines like “Gov. Brian Kemp Is Getting Pressure To Unveil How He Stole The Election From Stacey Abrams.”

“Concession means to say that the process was fair, but when I run an organization that in 10 days between election night and the night I refuse to concede we receive more than 50,000 phone calls for people who were denied the right to vote I am complicit if I say that that system is fair,” Abrams said at the time.

Suffice to say, the media did not give Trump the benefit of the doubt when he claimed he lost the 2020 presidency due to widespread voter fraud.

In fact, The New York Times claimed that Trump was living in an “alternate reality” when he challenged the 2020 election results.

Abrams, who announced her 2022 candidacy earlier this week, could be in for a rematch against Kemp. She is currently the only declared Democrat candidate.

On the Republican side, former State Rep. Vernon Jones, a newly-minted member of the GOP, is running in the primary against Kemp. One of his largest issues so far has been election integrity. There are also rumblings that former Georgia Republican Sen. David Perdue could enter the primary race.