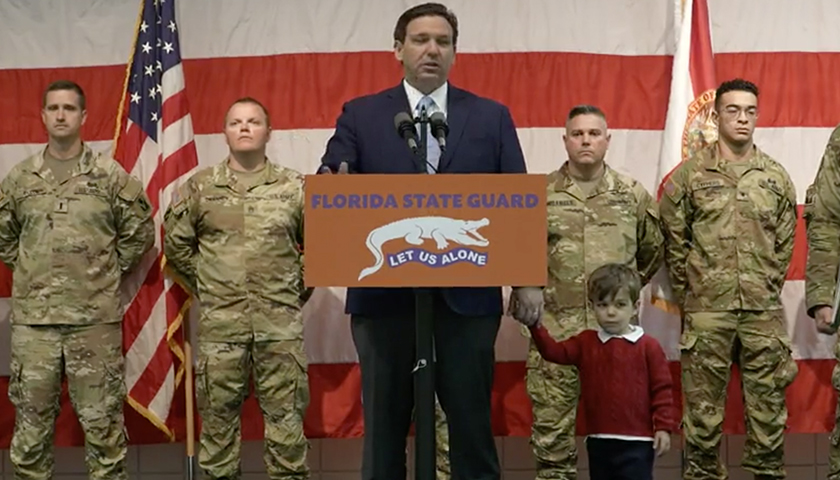 According to the Governor’s Office, his proposals would further support the National Guard in giving them extra hands in helping with state-specific emergencies such as natural disasters.

Funding for the Florida State Guard would enable civilians to be trained in the “best emergency response techniques” in order to assist with Florida’s National Guard.

“We are proud of our veterans and active-duty military members and proud of what our communities do to support them,” said Governor Ron DeSantis in a press release.

“Florida is one of the most veteran friendly states, and I think there are very few places that you would rather be on duty than in the state of Florida. As a veteran, I really appreciate what everyone who wears the uniform does in our state and am excited about these proposals – they will go a long way and have a meaningful impact. In Florida, we are going to continue our momentum of supporting our military, supporting our veterans and being good stewards of our military installations,” he added.

As listed in the release, the $100 million in funding is split up between five proposals, with $3.5 million going towards establishing the Florida State Guard. As for the rest, the majority of the funding, worth $87.5 million, is directed towards expanding the existing readiness center in Miramar, and to establish three new armories in Homestead, Gainesville and Malabar. The next highest allocation of funds is worth $8.9 million, and would go towards existing armory maintenance.

The next proposal, worth $5.1 million, would be used to support Florida National Guardsmen seeking higher-education degrees. The last is worth $2.2 million and is meant to build a new headquarters for the National Guard Counter Drug Program.

Nikki Fried, one of DeSantis’ Democratic opponents for the 2022 gubernatorial election and Florida’s current Agricultural Commissioner, went to Twitter Thursday where she commented on a tweet from a reporter named Jason Delgado, who described the Florida State Guard as a “paramilitary force” that only answers to the Governor.

“Can’t believe I have to say this, but Florida doesn’t need a paramilitary force that only answers to @RonDeSantisFL. Millions of Floridians know what it’s like to live under regimes like this – and came to our state to escape them. This must be stopped,” she wrote.

In the same light, U.S. Representative Charlie Crist, the other Democratic candidate in the 2022 gubernatorial election, went to Twitter and also commented on Delgado’s tweet.

“No Governor should have his own handpicked secret police,” Crist wrote.

If the $100 million is approved and the Florida State Guard is established, Florida would become the 23rd state with a state guard that is recognized by the federal government.

As stated in the Governor’s press release, the budget proposal also includes $12.2 million in scholarships for children and spouses of deceased or disabled veterans, and $3.6 million to improve base infrastructure and support projects that keep our military installations among the best in the nation.

Casey Owens is a contributing writer for The Florida Capital Star. Follow him on Twitter at @cowensreports. Email tips to [email protected]
Photo “Military Funding Plan” by Governor Ron DeSantis.