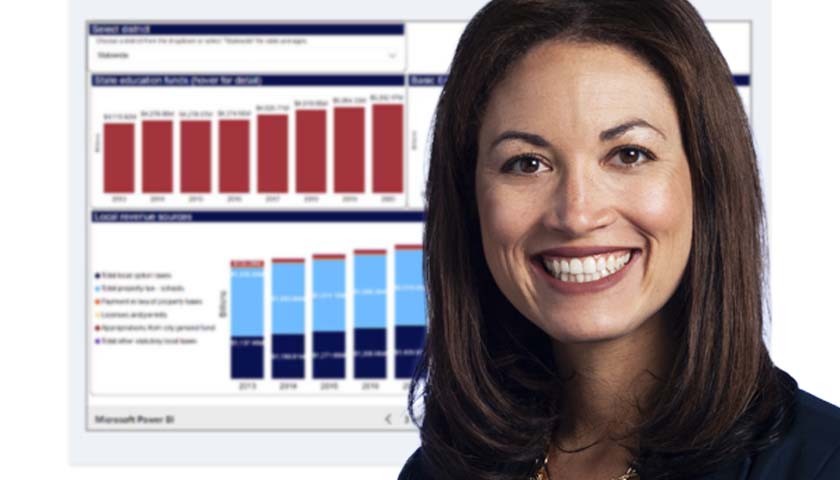 The Tennessee Department of Education (TDOE) has launched a dashboard aimed at transparency and information about the goings on in the state’s public school districts.

“This interactive dashboard filters data from the Tennessee Department of Education’s Annual Statistical Report (ASR) to provide information about Tennessee public education at the state and district levels,” the state comptroller’s website says.

A second dashboard keeps track of demographics in each school district, including the race of the students by percentage, and what it calls “special populations” –  students with physical disabilities, financial hardships, and limited English proficiency. It also measures student enrollment, which is steadily increasing statewide.

A third dashboard provides information on taxpayer funding for schools in each district.

That dashboard shows that taxpayer funding for Tennessee’s schools has skyrocketed over the past decade.

Still, Education Commissioner Penny Schwinn has been on a whirlwind listening tour of the state to discuss how taxpayer money should be divvied up amongst Tennessee schools. Attendees, who were mostly teachers, education professionals, to related to the school system generally agreed more money was the answer to improving the state’s performance in the classroom.

“We do want a student-based funding program, but what goes into that is literally being built in real-time based on the feedback we’re hearing from Tennesseans,” she said at a town hall held at the University of Tennessee – Southern in November.

That tour elicited a response from State Sen. Joey Hensley (R-Hohenwald), who Wednesday told The Tennessee Star that the state’s education issues cannot be fixed simply by pumping more money into the school districts.

Throughout the COVID-19 pandemic, there have been numerous reports that Tennessee’s students are struggling to reach academic goals as measured by standardized testing.