Commentary: A Market-Driven Solution to the Student-Loan Debt Spiral 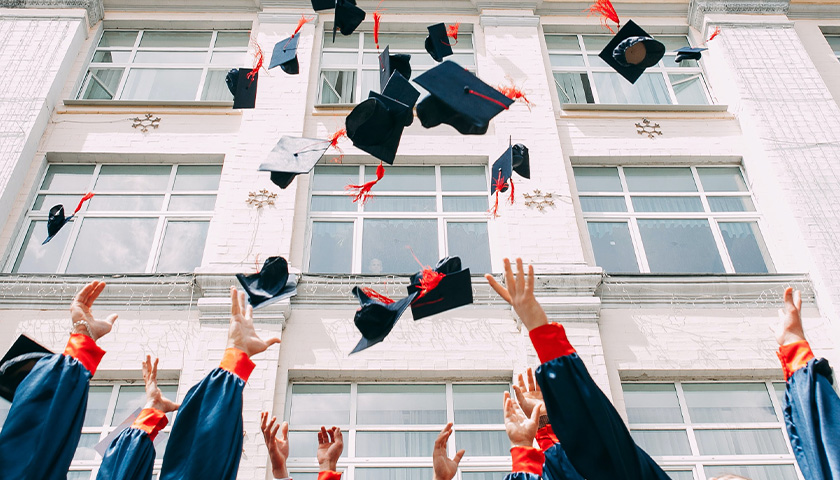 It’s calculated that somewhere north of 45 million Americans have run up $1.73 trillion worth of college debt. The numbers may surprise a lot or a little, which is really not the point.

The main thing is that debt now measured in the trillions is in a sense a logical midpoint to the federal government’s unfortunate involvement in the financing of college education. “No one spends the money of others very carefully” is a truth as old as humanity (or money) is, and the trillions worth of federal student loan debt vivify this truth. We know this because the hangovers (literal and figurative) from time spent on campus continue to grow.

For the longest time college has been billed as the path to upward mobility, and as a consequence more and more Americans have sought out education as their way up or out. To varying degrees they’ve reversed causation.

Arguably what made college so worthwhile was that completing it wasn’t necessarily a sure thing academically or financially. In decades past entering freshman were told to look around. Many of those in the room or auditorium wouldn’t be in cap ‘n gown four years hence. Either they would prove unequal to the learning, the financing of the learning, or both. As for those who finished, degree completion signaled real academic and financial achievement. Obstacles overcome on the way to a degree were of substantial value to employers.

Then government entered the picture, or expanded its footprint. If a college degree conferred status on the way to better job opportunities, government would decree more status. Financing of education would be made simpler via federal loans. Colleges eager to attain greater, more promising income streams would adjust to the new federal loan reality by making degree completion over four years (or maybe five or six years – who’s counting when someone else is paying?) quite a bit more doable. Call it “money printing,” college-degree edition. What was once very valuable, and indicative of a dogged persistence that translated well to the working world was somewhat eviscerated by government fiat.

Which brings us to the present situation we’re in. Monstrous student debt run up for degrees that mean less, and that mean less for reasons beyond the courses taught. See above. Still, money owed is just that. It’s also got a racial quality to it. A dive into the trillions worth of federal student loan debt reveals that black students are particularly burdened by monies owed. On average, they graduate with $7,400 more debt than their white counterparts.

Enter Robert Smith, the private equity billionaire based in Austin, TX. Smith famously retired the loan debt of a graduating Morehouse College class a few years ago, and it turns out that the gesture was just the beginning for this brilliant improver of companies. Smith intends to bring profits, and market forces to bear on the college education front.

Smith’s Student Freedom Initiative (SFI) aims to free the college students of today and tomorrow from the hangover that is loan debt. SFI will fund college education for today’s and tomorrow’s strivers not for free, but in return for a cut of the income earned by those students once they’re out of college, and in the working world.

It all sounds good, but some are no doubt skeptical. If a college degree has been devalued care of the proverbial printing press, where’s the market in throwing money at paper that becomes flimsier by the day? The answer is fairly simple.

The SFI won’t just fund any degree. Science, technology, engineering and mathematics (STEM) degrees will be eligible for SFI funding. All of which is crucial, though not for the reasons many readers might think.

The perhaps obvious response to the kind of degrees that SFI will finance is that STEM learning will impart crucial knowledge to the workers of tomorrow. Maybe, or maybe not. The view here is most likely not. Figure that Smith knows well as a successful investor that dynamic economies are defined by relentless change. In other words, the work of tomorrow likely won’t very much resemble the work of today. The latter is a feature of the U.S. economy, not a bug.

In prospering countries, what we call “work” is a moving target. Which is a short way of saying STEM learning likely can’t keep up with what’s happening out in the working world. The good news is that the lag isn’t a problem. Please keep reading.

What has long made a college degree most valuable has been what degree completion has said about the individual. It’s a reminder that arguably the most important aspect of a STEM degree is that it’s so much harder to attain than the more esoteric major offerings of colleges and universities that aren’t as quantitative, and for not being as quantitative, are difficult to attach a grade to. SFI will finance the attainment of what isn’t easy to attain. As a consequence, its piece of future earnings will be more certain.

At the same time SFI’s ownership won’t be crippling. It will take a cut of the earnings of workers, not a monthly payment. In short, if you’re not working you won’t have monthly payments to make. To which some will no doubt contend that SFI creates incentives among grads to not work. Not really. Think about it.

If you worked hard enough over four years to get a STEM degree, the effort made obviously says something about you. In particular, it speaks to striving qualities that translate to energetic work ethic. No doubt some financed by SFI won’t work, but money lost on them will be made up for by money made by the ambitious only too happy to pay a percentage of future earnings back in return for freedom from debt.

Robert Smith is an investor, and he’s treating students like an asset. This is a feature of his program, as opposed to a bug. Hopefully it’s the beginning of a trend so that a multi-trillion student loan midpoint doesn’t take us on a path to a much uglier – and expensive – endpoint.

John Tamny is editor of RealClearMarkets, Vice President at FreedomWorks, and a senior economic adviser to Applied Finance Advisors (www.appliedfinance.com). His new book is titled When Politicians Panicked: The New Coronavirus, Expert Opinion, and a Tragic Lapse of Reason. Other books by Tamny include They’re Both Wrong: A Policy Guide for America’s Frustrated Independent Thinkers, The End of Work, about the exciting growth of jobs more and more of us love, Who Needs the Fed? and Popular Economics. He can be reached at [email protected]