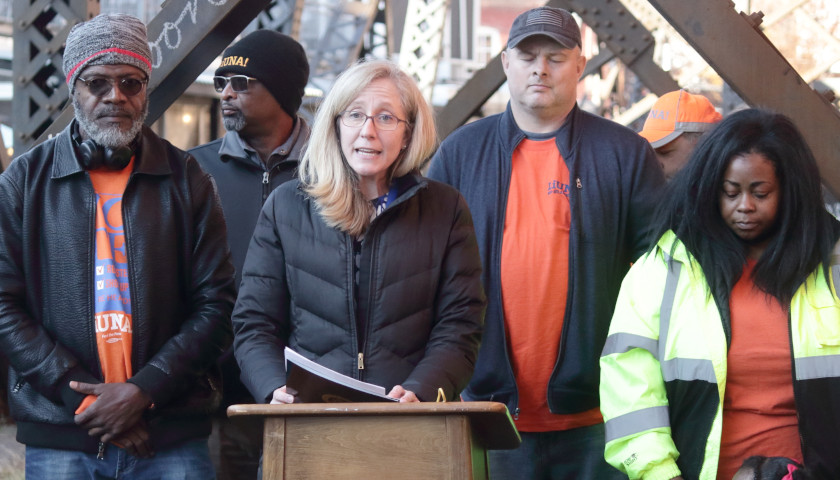 “Getting this legislation to President Biden’s desk and signed into law was one of my top priorities this year in Congress, because I know it’s a win for Virginia,” Spanberger said. “With the stroke of a pen we are finally addressing the needs of our roads, our bridges across the Commonwealth, the need for the expansion of broadband connectivity. We’re building out our electric vehicle network and boosting our efforts to build our resiliency against climate change. We’re making smart and long overdue investments in our electrical grid, our water infrastructure, our ports, and our rail systems. These investments will mean faster commute times, lower energy bills, safer drinking water, and faster trips throughout Virginia.” 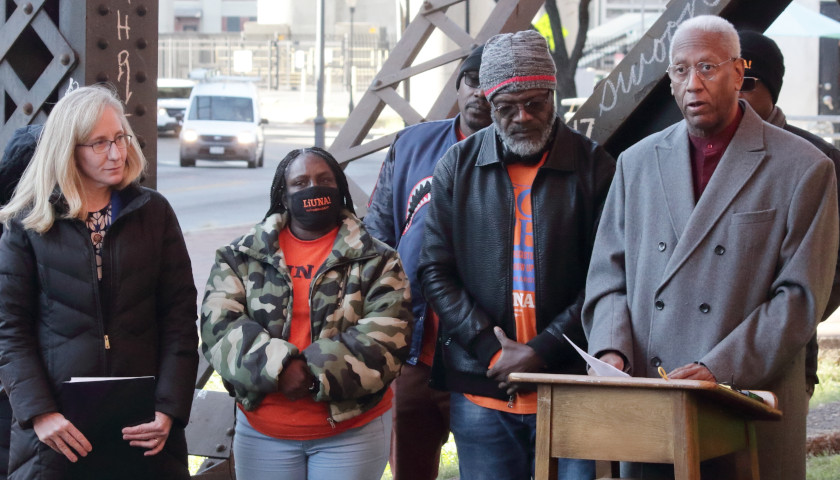 During the press conference, Democrats Spanberger and McEachin stood under a train trestle and were flanked by members of the Laborers’ International Union of North America (LIUNA). Spanberger said LIUNA members had helped her call for passage of the bill.

“This deal is about delivering help to where it is needed,” McEachin said, listing the many of the same items Spanberger mentioned.

“All this while creating thousands of good-paying life-sustaining, quality union jobs,” he said. “Unions, their members and their incredible contributions are so important to Virginia and to our nation. So, I’m very excited about how the bipartisan infrastructure deal will help create thousands of new employment opportunities for Virginians while making crucial investments in our state.”

According to a White House fact sheet distributed by Spanberger’s staff, formulas show that over five years Virginia is expected to receive:

After the conference, a spokesperson said the timing for allocating the funds from the bill will vary from agency to agency, due to the wide number of federal and state agencies involved in the process. The bill does require funds for road and bridge repair to be transferred to the Federal Highway Trust Fund by December 15.

Although some Republicans in both the Senate and the House of Representatives voted for the bill, no Virginia Republicans supported it. Virginia’s most senior Republican representative, Congressman Rob Wittman, called the bill the “Green New Deal in Disguise” in a press release following the House November 5 vote.

“I support investing in our infrastructure. But I will not support a package that fails to responsibly invest taxpayer dollars in genuine infrastructure projects. Of the $550 billion in new spending, only $110 billion – or 17.6 percent – goes to roads, bridges, and major projects generally considered to be traditional infrastructure. Much of the remaining $1 trillion are Green New Deal provisions. As such, it is hardly fair or accurate to call this an infrastructure package,” Wittman said.

Spanberger also discussed provisions to assist with training and recruitment of truck drivers to address industry shortages. She said that the bill also included an amendment she and a Florida representative supported to modernize livestock hauling regulations.

“As we head towards Thanksgiving, I want to touch on one portion of the infrastructure law related to supply chains. It is no secret that the cost of goods including groceries has been increasing, both due to consumer demand and due to supply chain challenges, and we can do more both in the long run and in the short term to strengthen our supply chain. And the bipartisan infrastructure law does just that,” she said.

After the conference, the congress member told reporters that she was pleased by President Biden’s Tuesday decision to release 50 million barrels of oil from the strategic petroleum reserve in response to rising fuel prices. However, the average daily consumption of oil in the United States is about 20 million barrels of oil daily.

“It’s not a partisan issue,” she said. “Regardless of how you identify politically, when you walk into the grocery store, if the products that you typically buy are more expensive, you’re feeling that. If you are like so many of the people that I represent and you travel from one county to another for your job, every single day it costs you more and more money to go commute to work.”

She said, “So for me, the priority is to make sure that on Capitol Hill I am making clear the experience of the people I represent back home in Virginia, because regardless of what your political affiliation is, or whether you’re a voter at all, the impact of these price increases, the impact of the fuel costs is one that people feel.”

Eric Burk is a reporter at The Virginia Star and The Star News Network.  Email tips to [email protected].
Photos by Eric Burk.