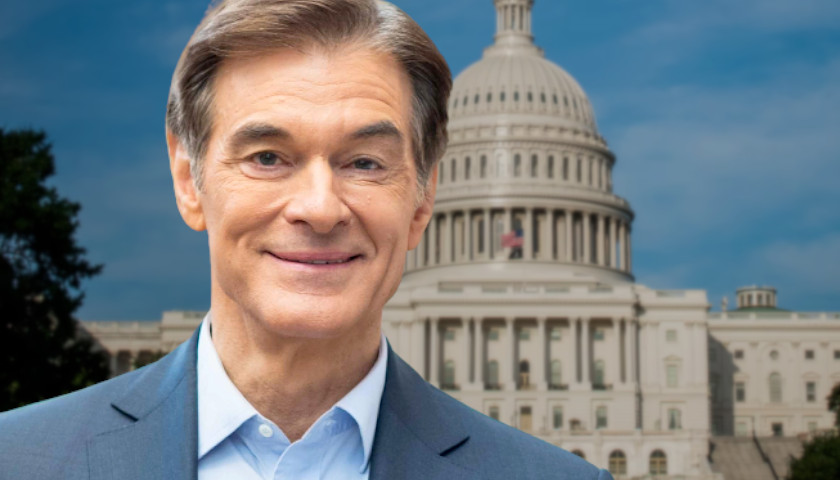 In an announcement on his website, Oz touted foremost his background as a heart surgeon and blasted elite mishandling of the COVID-19 pandemic.

“In our time of need, we want to be surrounded by people of action more than armchair intellectuals, because a great surgeon never censors ideas and never shuts off the light that shines on our wounds, which is what happened while our nation battled the pandemic,” Oz insisted. “Witnessing our nation’s failings of COVID, I learned that when you mix politics and medicine, you get politics instead of solutions. That’s why I am running for United States Senate—to help fix the problems and to help us all heal.”

In particular, he condemned the heavy-handedness of the lockdowns and distancing rules imposed by government in response to the viral outbreak. He also lamented constraints enjoined on doctors regarding the prescription of treatments for the coronavirus, precluding him from funding clinical trials to utilize the controversial drug hydroxychloroquine.

A part-time Columbia University professor, heart-valve innovator, Emmy-award winner and author of several health-related books, Oz’s celebrity has gradually breezed into pop culture. In 2018, for instance, he made a cameo in Pete Holmes’s HBO comedy series Crashing and interviewed Holmes on the Dr. Oz Podcast the following year.

Though Oz has a history with the Keystone State—he holds degrees from the University of Pennsylvania’s Perelman School of Medicine and Wharton School of Business—he is already receiving scrutiny over his residency in Pennsylvania. Though he is now registered to vote in Montgomery County, just north of Philadelphia, he grew up in Delaware and lived for many years in New Jersey, even voting there as recently as autumn of 2020.

This prompted the Montgomery County-based conservative pundit Kyle Sammin to tweet, “I guess the biggest problem with Dr. Oz being a senator from Pennsylvania is that he does not live in Pennsylvania.”

U.S. Rep. Bill Pascrell (D-NJ-9) similarly quipped via Twitter, “I want to congratulate my North Jersey constituent Dr. Oz on his run for US Senate in Pennsylvania. I’m sure this fully genuine candidacy will capture the hearts of Pennsylvanians.”

Still, Oz enters the race at an opportune time, insofar as the crowded field of Republican candidates no longer includes erstwhile frontrunner Sean Parnell. An Army veteran who had the backing of former President Donald Trump, Parnell ended his Senate bid last week after a court awarded full custody of his children to his estranged wife and found Parnell to have behaved abusively during their marriage.

Arkoosh, herself a physician who has favored strict COVID-19 countermeasures, has already begun trashing Oz’s stature as a medical expert. In an online fundraising appeal, the commissioner declared in bold: “Pennsylvania needs a REAL doctor like Val Arkoosh. Not a quack like Dr. Oz.”

Oz has articulated a largely populist conservative platform so far. He has described himself as a thoroughgoing pro-lifer, a proud “target of drug companies,” an advocate of stringent border security and an opponent of liberalized trade with China.

Bradley Vasoli is a reporter at The Tennessee Star and The Star News Network. Follow Brad on Twitter at @BVasoli. Email tips to [email protected].
Photo “Dr. Mehmet Oz” by Dr. Mehmet Oz.