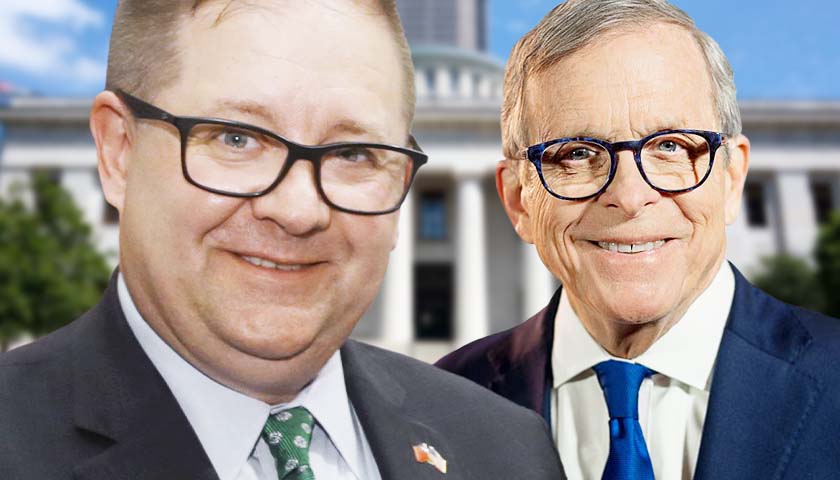 “As a follow-up to my letter to you of November 8, 2021, enclosed is a letter I sent to members of the Ohio Republican State Central Committee related to unexplained ORP Net Worth Decrease of $270,600 in 2021,” wrote Mark A. Banbridge, who left Ernst and Young in 2009, before establishing his business advisory firm in Columbus. The Star News Network obtained a copy of Bainbridge’s memorandum.

There have now been three unanswered Bainbridge letters to DeWine.

The veteran of 40 years as a certified public accountant wrote that discrepancies going back multiple years exceed $2 million.

Bainbridge wrote that if Paduchik and party treasurer David W. Johnson do not resign, the central committee should vote to remove them.

Another complication Bainbridge pointed out was that when Paduchik’s predecessor, and current Senate candidate, Jane E. Timken, was the party chairwoman from 2017 to 2021, the party’s audit firm resigned from the account because of a conflict of interest—and no audit firm has been named since. That firm, Clinton Larson Allen, performed work for members of Timken’s family and the lobbying led by her husband Ward J. “Tim” Timken Jr., McKinley Strategies.

There has been no audit of the ORP books since CLA resigned from the party account.

Bainbridge: There is no explanation for why the ORP books are off $270,600

The former Ernst and Young partner has been leading a cadre of reformers inside the Ohio Republican State Central Committee, the governing body of the ORP looking into the state party’s financial records. These reformers have been increasingly frustrated by Paduchik, who took over the party leadership on February 26 after his posting at the Republican National Committee in Washington.

The ORP must be transparent and be above reproach in all matters, and that its financial records must be accurate, Bainbridge wrote. “Without financial integrity, we will lose our supporters and our donor base. As Members of the SCC, we must fulfill our fiduciary responsibility and demand transparency and financial integrity.”

At issue are unexplained gaps in the ledger, such as the ORP’s $270,600 drop in the party’s net worth from January 2021 through August 2021, which Bainbridge said in the memo he asked Paduchik to explain for months.

“While it would be my preference to resolve the issues directly with Paduchik, his resolute determination to hide ORP’s finances and not address this issue requires me to inform SCC members and raise the question in a public forum,” he wrote.

As an example of his frustration with the state party chairman, Bainbridge wrote that just before the state party central committee’s September 10 meeting, committee members were given financial statements through August 31.

Next, Bainbridge said Paduchik told him to contact George Husted, whose Twitter profile identifies him as “Big city accountant with a politics obsession and compliance officer for the best firm in the country.”

However, Bainbridge wrote that Husted and ORP Executive Director Justin Bis would not give him the information he requested on orders from the chairman.

In the memo, the CPA wrote that he did not want to go public with his concerns. Still, he was given no choice due to the Paduchik’s intransigence, which included his thwarting the functioning of the state party’s Audit and Fiscal Review committees.

“Had the Audit Committee and the Fiscal Review Committee addressed the financial issues, the resolution could possibly have been handled within the normal structure of the ORP rather than in the public domain. Paduchik has failed to have the requisite meetings of these two committees, thus eliminating the opportunity to review the financial statements and to question the ORP financial position,” he wrote.

When Bainbridge wrote that he compared the December 31 figures with the financials for 2021 ending August 31, he caught an error.

“To have $270,601 disappear from the ORP’s equity at August 31, 2021, is a mystery that requires a detailed explanation with proper documentation. Personally, I am at a loss to understand what could possibly lead to such a decrease in equity,” Bainbridge wrote.

“This is not the first time ORP equity has mysteriously decreased. Unexplained decreases in equity in prior years has amounted to over $2,000,000,” he wrote.

Bainbridge wrote that he found discrepancies in the ORP’s 2017 and 2018 financial statements. As a result, he requested an audit for those years, along with his request for audits for the 2019 and 2020 financial statements, which are consistent with the party’s Permanent Rules and require audits for every year.

As The Ohio Star reported previously, neither current ORP Chair Paduchik nor his predecessor, former ORP chair and current US Senate candidate Jane Timken have explained a $1.7 million reduction in retained earnings in the 2017 ORP financial statement.

An audit in compliance with Generally Accepted Accounting Principles has yet to be conducted of either the 2017 nor the 2018 ORP financial statements.

The Ohio Republican Party chairman has not ignored Bainbridge and has put out responses to members of the state committee and other officials.

In his August 12 memorandum to state committee members, Paduchik said he addressed Bainbridge’s concerns and tried to work with him.

This memo is in response to Mark Bainbridge’s email of August 11th in which he makes unsubstantiated allegations of financial impropriety and accuses me of lying to the State Central Committee (SCC). Mark is entitled to his own opinion but not his own facts. Several statements in his email are false and I will not dignify his personal attacks against my integrity and honor.

I’ve been chairman of this committee for little more than five months. In that time, I’ve treated Mark Bainbridge with respect and have made every attempt to accept his ideas and address his concerns. Several of his suggestions have been already implemented during my short tenure as chairman we’ve: 1) removed Tom Dains from financial oversight and replaced him with a CPA compliance contractor; 2) revised the ORP human resources manual; 3) created position descriptions for ORP staff; and 4) require all staff to use secure ORP laptops and cellphones for official business.

Paduchik also wrote in the August 12 memo that he acknowledged the $650,189 discrepancy, which he said was due to a coding error, which was corrected and is part of a new review of the party’s finances by the accounting firm HenryAlan.

CliftonLarsonAllen (CLA) was selected last year to conduct an audit of the ORP for the 2019-20 period. The audit began in earnest on May 13, 2021, and I requested the scope of the audit address the accuracy of the May 24th memo explaining the $654,310.76 Accounts Receivable data entry error. The audit began May 15, 2021 and is in process. CLA has temporary suspended activity while CPA George Husted with Henry Allen LLC corrects several data entry errors.

It is important for this independent audit to be completed without interference. When it is complete, the SCC will have a full understanding of the 2019-20 finances and the Accounts Receivable error. Please know, if there are any problems identified with the finances, we will take appropriate action.

More recently, Paduchik sent a November 22 letter to Chairman of the Morrow County Republican Committee Dan E. Osbourne to explain why he took action to remove committee members from the Audit Committee and his professional frustrations with Bainbridge and his allies.

Serving on ORP subcommittees is an important responsibility. Members of those subcommittees are determined in one of two ways: 1) by their elected position of leadership on the SCC or 2) by appointment of the Chairman. Some members were removed from their subcommittee positions for one or more of the following reasons: libeling members of the committee, lack of candor, leaking documents to the press, conducting opposition research on their committee colleagues, misrepresenting a resolution submitted to the SCC for consideration, harassing and/or threatening the auditors during the audit process, and yelling at an ORP staff member. Appointed subcommittee assignments are subject to change at any time.

The Dec. 3 meeting of the ORP Central Committee is held at Columbus Nationwide Hotel and Conference Center and its proceedings are open to the public.