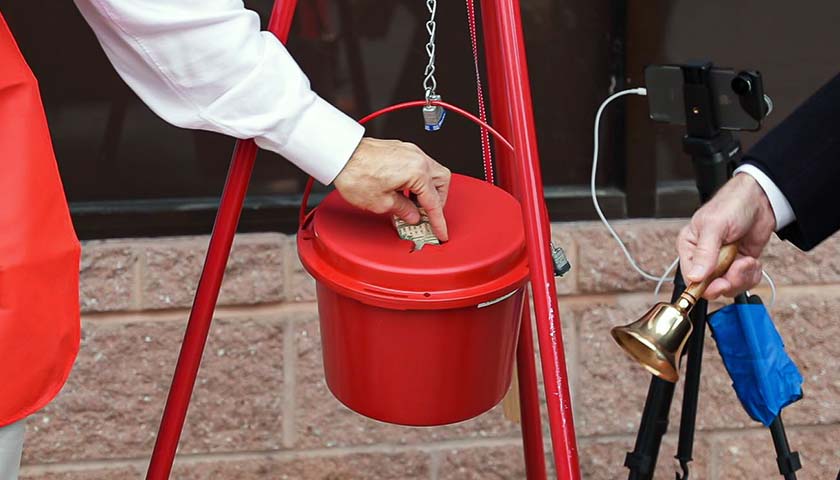 Rather than admit their woke policies are not supported by donors or staff, the leadership of The Salvation Army hides these policies from the public. Salvation Army captains tell me, however, that mandatory “diversity” training and calls to repent for racism are still very much integral to TSA internal policies.

I am president of Color Us United, an organization created to stand up for the individual dignity of ordinary Americans against abusive woke policies. Several months ago Color Us United learned that the Salvation Army had gone woke by imposing a curriculum that asks members to “repent for racism.“ We have called them out publicly on this and even met with their National Commander. Instead of addressing the policies that the majority of their members and donors do not support, however, the Salvation Army has hidden its woke materials.

The Salvation Army’s “Let’s Talk About Racism” curriculum endorses books such as Ibram X. Kendi’s How to Be An Antiracist and Robin DiAngelo’s White Fragility. It calls on “White culture” to quit denying racism and admit its responsibility for racism. It calls upon whites to quit trying to be colorblind on race.

It even asks its own members to “repent” for “racism.”

The organization’s members and supporters will not stand for these sorts of policies infiltrating the Salvation Army. I went up to national headquarters in Alexandria, Virginia, to negotiate with the National Commander of the Salvation Army, Kenneth Hodder. Commander Hodder was a very nice and generous person and a gracious host. He refused, however, to release a statement denouncing critical race theory and rid the Salvation Army of wokeness within its curricular materials. That was the purpose of our meeting, so we have to work harder to convince him of the widespread dissatisfaction with the Army’s woke policies.

Then, on October 29, I heard from a Salvation Army captain that the Army had quietly removed its “Let’s Talk About Racism” materials from its website. I figured this was the result of meeting with the National Commander. The Commander will not denounce critical race theory—yet he is worried enough about its impact on fundraising that he’s willing to take it down from the public website.

Don’t worry, we have all the original materials which are circulating throughout the Salvation Army’s ecosystem here.

The Salvation Army has also been conducting mandatory diversity training for its officers. In these sessions, the content of the “Let’s Talk About Racism” curriculum is still preached. The same authors cited above instruct officers about how America is racist and why we should be dividing people by race.

As a result of learning about this descent into wokeness through Color Us United’s nationwide petition, which has gotten 11,000+ signatures, hundreds of donors have decided not to give to the Salvation Army this fundraising season. Many have outlined their reasons for us, including:

“Race has no place in charity work.” – Penny

“I donated a car to them in 2019 and I will not do so again unless they stop CRT in their organization. – Esther

The Salvation Army’s traditional fundraising season is in November and December before Christmas, and it is apparent the Army is alarmed that their descent into wokeness will affect their fundraising. Yet, it hides its woke policies instead of addressing the fact that its members and supporters do not want them.

Color Us United is an organization that wages institutional guerilla warfare against organizations that have gone woke.

Kenny Xu is the president of Color Us United, a nonprofit advocating a race-blind America in the midst of racial division. He is the author of An Inconvenient Minority, which exposes racial discrimination against Asian Americans at elite colleges such as Harvard and Yale.
Photo “Salvation Army Kettle and Bell” by The Salvation Army USA.