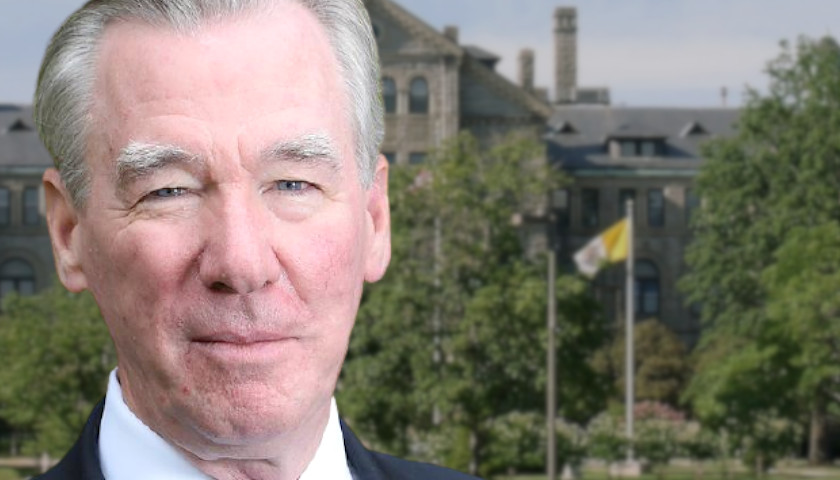 Catholic University of America (CUA) in Washington, D.C., has responded to several reports of a painting of George Floyd depicted as Jesus that hangs in its law school.

“The painting was put in place last February in a ceremony outside the law school’s Mary Mirror of Justice chapel. The press began covering it this week, leading to criticism on social media and a substantial number of emails and phone calls,” President John Garvey said in an open letter. “Some critics called the image blasphemous because they saw it as deifying or canonizing George Floyd. Some comments that we received were thoughtful and reasonable. Some were offensive and racist. Much of the criticism came from people unconnected to the University.”

Earlier this week, The Virginia Star interviewed a CUA alumnus and current CUA student, both of whom said they wanted the painting removed.

“No one asked students, alumni, or parents if they wanted a George Floyd-as-Christ painting, or a multicultural office, or a self-audit on racism, or a Latin Mass ban,” Ryan Ellis, an alumnus, told The Star Wednesday.

“The arrogant Campus Ministry and administration liberals simply imposed it. Similarly, they will ignore petitions to reverse these things,” he said. “The value of a petition, therefore, is not in and of itself. Its purpose is to organize an army of alumni cutting off donations, parents sending their kids elsewhere, and bad media attention to force action.”

Blayne Clegg is a junior at the school, and the president of CUA’s chapter of the College Republicans. He has been the main face of the campus’ opposition to the painting.

“When you have 3,000 students paying something like $50,000 a year to attend this university, the students are your top concern,” he told The Star.

“These paintings were hung up without consultation from undergraduate students, and now almost 9 months later, students are finally being consulted through the petition and social media, and the consensus is clear: these paintings are not in line with a faithful interpretation of Catholic theology,” he continued. “The university has been receptive to these petitions before, and they must do so again.”

“It has been the University’s policy, throughout my time as President, not to cancel speakers or prevent speech by members of the community,” the letter said. “Last Spring we applied this policy to an appearance by Abby Johnson. Consistent with that policy, we declined suggestions in this case that we take the image down.”

Abby Johnson is a pro-life speaker who is controversial in left-wing circles, and despite the fact that the Catholic Church officially holds a pro-life stance, her spring speech at CUA was protested by campus groups.

Garvey’s letter also said that the painting was briefly stolen this week, but quickly recovered.