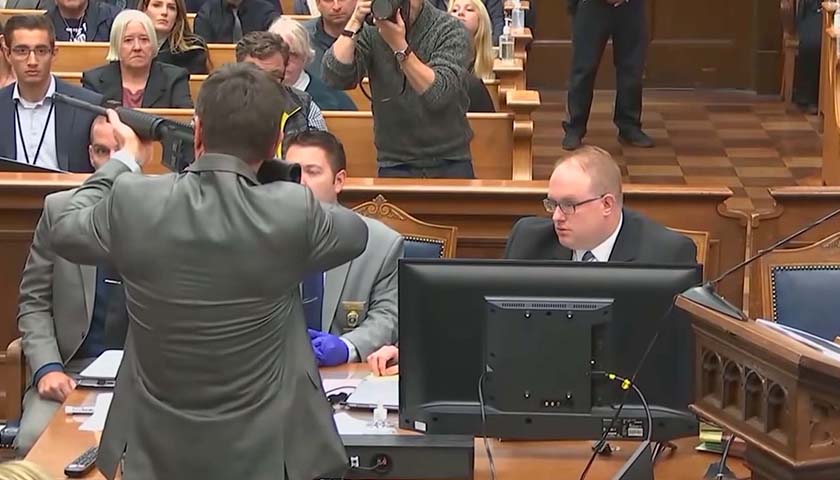 The conclusion of the Kyle Rittenhouse trial, in which the 18-year-old was found not guilty of murder or assault in the shootings of three rioters in the city of Kenosha, Wisconsin, reflects a widening gap in how Americans conceive of justice and self-defense.

For those cheering Rittenhouse’s exoneration, the case was a prototypical demonstration of rights and obligations of republican citizenship. A lawfully armed Rittenhouse joined with neighbors, in the absence of effective governance, to protect lives and property by putting out fires, cleaning up damage, and offering medical assistance to the injured. When he was directly assaulted for engaging in this activity, Rittenhouse defended himself, harming no one who had not directly placed him under reasonable fear for his life.

In contrast, Rittenhouse’s opponents have a radically different conception of self-defense in which it is his assailants, Joseph Rosenbaum, Anthony Huber, and Gaige Grosskreutz, whose behavior was not only justifiable but righteous and worthy of celebration.

As I have previously written, this view is sometimes termed “community self-defense,” in which upholding the demands of oppressed minority groups, and not preserving the rights of individuals, is the basis of the most fundamental right.

In this conception, what those of us who support Rittenhouse see as unlawful violent and destructive riots are rather “collective actions” against the “structural violence and oppression” of an inherently racist and unjust system. The right of self-defense is not rooted in the right of an individual to be free from harm, but rather a collective right of an oppressed “community,” defined as a pre-approved minority identity group, which has exclusive right to express its “political demands,” through violence, if necessary.

Increasingly, it is not merely the anarcho-communist rioters of Antifa and BLM that see the world through this framework. New York Attorney General Letitia James called Rittenhouse’s acquittal a “dark day” that showed “the system needs to be uprooted.” Former New York Governor Andrew Cuomo said the verdict “sends a dangerous message about who & what values our justice system was designed to protect.” Even President Joe Biden felt obligated to express “anger and concern” over the outcome.

The prosecutors in the Rittenhouse case also acted in accordance with this new communal defense of oppression and identity hierarchy. Their star witness, Grosskreutz, affiliated with the People’s Revolution of Milwaukee, openly testified that he pointed his (illegally concealed) pistol at Rittenhouse first, showing that the true issue at bar was not the presence, use, or legality of firearms, but rather the cause for which they were employed. The prosecutor’s incredulity that Rittenhouse felt himself permitted to put out fires started by others was so absurd it generated its own meme.

In closing arguments prosecutor James Kraus insisted that Rittenhouse unlawfully defended himself because “everybody takes a beating sometimes,” implicitly invoking Martin Scorsese’s epic film about a different kind of mob violence and explicitly condemning the notion that an individual has a right to hold his person inviolate from the will of the masses. Rittenhouse interfered with the communal will of the rioters, and so could be justly punished—either on the spot or in the courts.

When justice requires burning down the existing system, putting out fires is a (moral) crime.

For any society there is no question more fundamental than when, and by whom, force may justly be used. In the traditional American understanding, the right to use force was reserved for the defense of individual rights, either by the citizen himself, or delegated to the government by social contract, in accordance with the common good and the rule of law.

This new principle of community-defense reserves force as the legitimate right of the “the oppressed,” the communal possession of certain identity groups executed on their behalf by a revolutionary vanguard, whether in the streets or from a Soros-backed leftist district attorney’s office.

As its opponents understand perfectly well, if the individual does not have a right to self-defense, a system which generates its powers from delegated rights can’t defend itself, either. In this sense it really wouldn’t have mattered whether Kyle Rittenhouse was a 17-year-old boy or a sworn police officer, only membership in an aggrieved class would justify action. Nor can a society built on individual rights forever tolerate self-defined communities holding themselves out as the sole possessors of justice without succumbing to anarchical violence.

A country with two separate notions of the most basic questions of justice cannot continue to muddle along forever.

Kyle Shideler is the Senior Analyst for Homeland Security and Counterterroism at the Center for Security Policy. You can follow him at @ShidelerK on Twitter.
Photo “Prosecutor Raises Rifle in Courtroom During Closing Arguments in Kyle Rittenhouse Trial” by Author. Attribution. Background Photo “Title” by NewsNation Now.