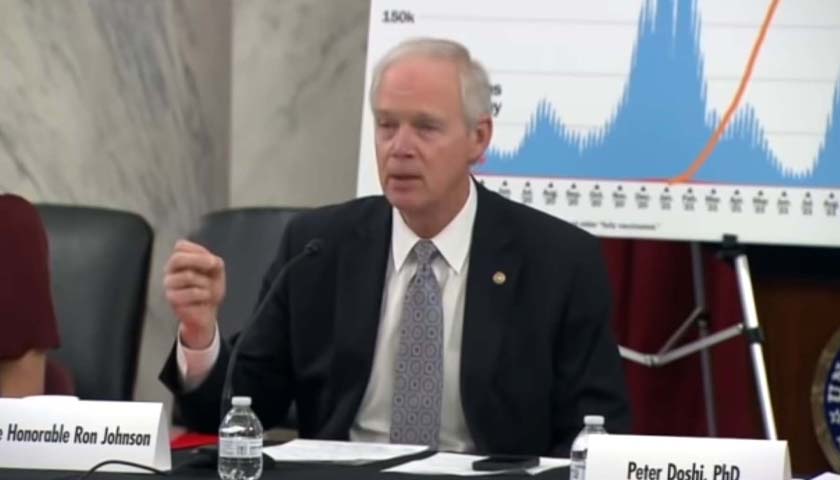 Senator Ron Johnson (R-WI) announced on Twitter that YouTube has removed his video of an expert panel discussing the impact of the COVID vaccine and mandates. Johnson said this is the fifth time YouTube has removed one of his uploads. Johnson’s YouTube account is now temporarily suspended from uploading content for seven days.

For the 5th time this year, @YouTube is censoring me from telling you the truth.

This time they don't want you to hear 3.5 hours of stories from doctors, scientists and the vaccine injured.

At least you can still watch it for yourself on @rumblevideohttps://t.co/IBOcjxZyu9

Johnson said that YouTube’s censorship has only gotten worse, “This time they don’t want you to hear 3.5 hours of stories from doctors, scientists and the vaccine injured.” His video featuring stories of those who have been injured by the COVID vaccine as well as expert opinions can still be found on Rumble.

A YouTube spokesperson told The Wisconsin Daily Star that they removed the video for violations of their “COVID vaccine misinformation” policies. “We removed a video posted by Senator Johnson for violating our policies on COVID vaccine misinformation, specifically for suggesting that vaccines are unsafe and ineffective. This resulted in a first strike on the channel, preventing uploads for seven days, in accordance with our longstanding three strikes rules. A second clip the Senator posted of the same roundtable remains available on YouTube because it contains discussion of personal experiences about vaccines and does not include the violative comments made in the full video.”

Johnson said in his tweet that they were suspending him “because of my November 2 expert panel giving voice to people who just want to be seen, heard and believed.” He said, “Apparently, the Biden administration and federal health agencies must not be questioned.”

Hayley Feland is a reporter with The Minnesota Sun and The Wisconsin Daily Star | Star News Network. Follow Hayley on Twitter or like her Facebook page. Send news tips to [email protected].
Photo “Ron Johnson” by “SenatorRonJohnson.