Shapiro is the host of the Ben Shapiro Show and is also the editor emeritus for The Daily Wire. He is the former editor-at-large of Breitbart News.

Described as “a foe of extraordinary polemical agility” by The Washington Post, Shapiro became a nationally syndicated columnist at age 17 and is one of the most requested speakers on college campuses across the country. He graduated UCLA with a bachelor in political science and then Harvard Law School in 2007.” 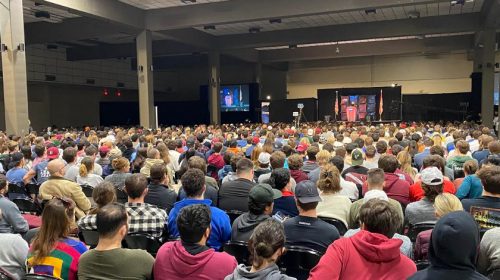 In a report published this summer, an NPR analysis noted that “stories published by the site Shapiro founded, The Daily Wire, received more likes, shares and comments on Facebook than any other news publisher by a wide margin.” In addition the report indicated that Shapiro’s personal Facebook page has more followers than The Washington Post.

The speaking engagement was sponsored by FSU’s College Republicans.

The chair of the group, Taylor Walker, said they have been trying to get Shapiro on campus for years. It was reported that the $35,000 speaking fee for the event was covered by the Young America’s Foundation, a group whose mission is committed to ensuring that young Americans understand and are inspired by the ideas of individual freedom, a strong national defense, free enterprise, and traditional values.

The topic of discussion Monday was how to bring America back from the brink of radicalism, and stop the Biden administration from codifying “leftist ideas” in American law. The event is a part of the YAF Fred and Lynda Allen Lecture Series.

Ahead of the event, a number of left-leaning FSU student organizations were planning to protest Shapiro’s appearance. In addition, the FSU College Democrats issued a statement calling on the FSU President to cancel the event. The press release stated, “If President McCollough wishes to foster a safer and more inclusive community here on campus, like he has repeatedly claimed to want, he will cancel Shapiro’s event.”

In response to the statement, an FSU spokesperson said the university “is committed to promoting an environment where the entire community can freely discuss and exchange different beliefs and opinions.”

Shapiro’s appearance was livestreamed by organizers and may be watched in its entirety here.

Steve Stewart is the Managing Editor and a contributor at The Florida Capital Star. Email tips to [email protected]