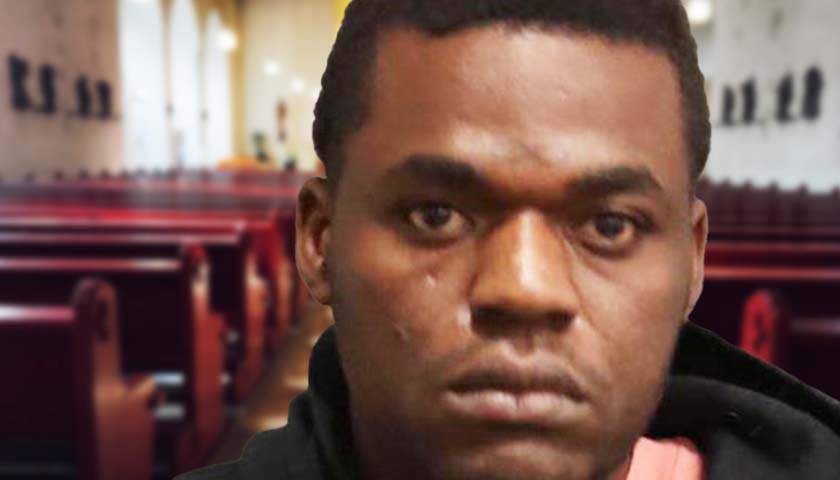 The quick actions of a Nashville pastor and several of his parishioners saved a church from violence Sunday afternoon, according to the Metro Nashville Police Department (MNPD).

MNPD officials said in a press release that Dezire Baganda, 26, was sitting at the front of the Nashville Light Mission Pentecostal Church when he pulled out a gun and walked up to the altar where the pastor was praying with several members.

“Baganda told everyone to get up while he waved and pointed the handgun at the congregation. The pastor quickly tackled Baganda before any shots were fired. Several church members jumped in to assist in disarming Baganda and holding him to the ground until officers arrived on scene,” according to the press release.

“While Baganda was not a member of the church, the pastor said he had attended services before. Baganda is charged this afternoon with 15 counts of felony aggravated assault. Multiple counts are expected to be added at the first of the week.”

The Tennessee Star’s efforts to contact the Nashville Light Mission Pentecostal Church on Monday were unsuccessful.

The Metro Nashville Criminal Clerk’s website said Baganda has prior arrests in the city on charges of resisting arrest, possession of a controlled substance, and disorderly conduct.

Dan Zimmerman, writing about Cohen’s remarks for The Truth About Guns, called Cohen a liar.

“We’re sorry to burst the Congressman’s well-insulated, Beltway-bound bubble, but surely even he heard about the shooting at the West Freeway Church of Christ outside Fort Worth that was stopped by a congregant with a pistol? It was caught on video for all the world to see. But that was almost two years ago! Someone as busy and important as a U.S. Congressman can’t be expected to remember something like that!” Zimmerman wrote.