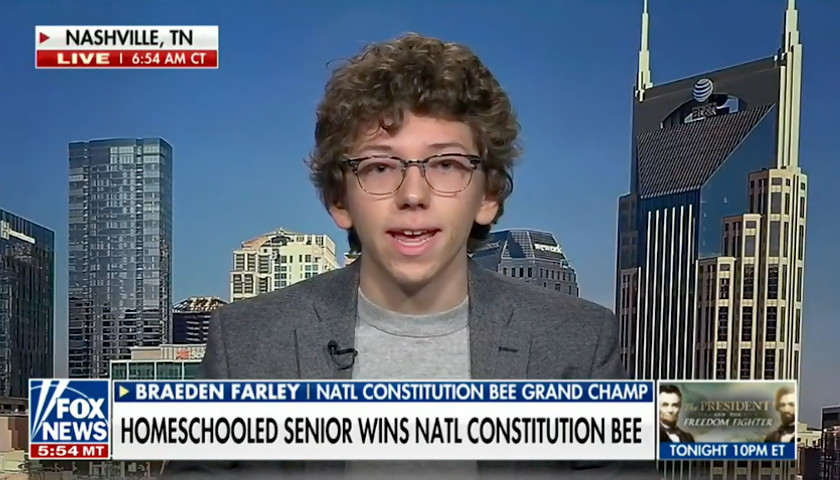 Farley, a homeschooled senior from Spring Hill, Tennessee, discussed the specifics of the competition and key details of how he was successful.

In total, 22 students competed in the competition, with Farley claiming the $10,000 education scholarship.

Due to his background in speech and debate, the winner expressed favor for the essay portion of the competition, where competitors were given twenty minutes to compose an essay in response to a question they selected out of six options that they then presented to the judges and audience within three minutes.

A key to his success, Farley explained, was being able to apply the foundations of the Constitution to modern day law or interpretation.

“So you have to be able to understand and articulate and think critically about a lot of the Supreme Court law, whether it be the modern interpretation of the Constitution, what it meant back when it was originally written, and you have to have an in-depth understanding of it, not just memorizing the entire thing,” he continued.

The National Constitution Bee marked its fifth year in 2021. In addition to Farley’s Grand Championship win, Junior Charles Jacob Foltz of Martin, Tennessee took home the Second Place prize of $5,000 education scholarship, and Sophomore Gianna Ross of Thompson’s Station, Tennessee took home the Third Place prize of $2,500 education scholarship. Additional prizes were awarded to top performers in the Preamble Challenge as well as to the “MVP” of the Team competition.