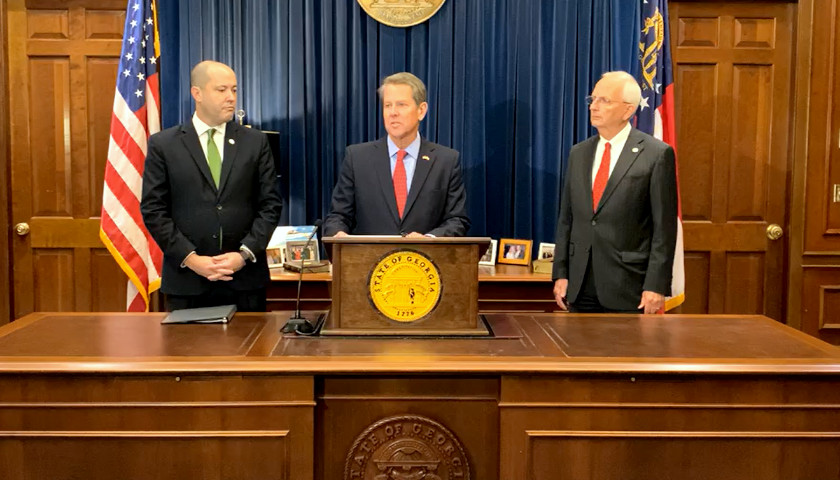 Kemp — flanked by state attorney General Chris Carr and state Agricultural Commissioner Gary Black — alerted the public at a press conference at the Georgia State Capitol. Carr said Biden’s mandate is unconstitutional and he will sue to stop what he called the president’s overreach.

“This lawsuit is about whether a president has the authority to effectively run a state agency by manipulating his contractor power,” Carr said.

Kemp warned that business owners who work with the federal government are now more likely to lose employees to competitors.

“Even if you can keep the workers you have then, congratulations, Joe Biden has now made you into the vaccine police,” Kemp said.

“For hard-working Georgians out there who work for a federal contractor and have chosen, for whatever reason, not to get vaccinated, Joe Biden now wants you to lose your job. That is why we are here today.”

Carr said this was “an unprecedented and unconstitutional use of power by a president.”

“This executive order, though billed as a federal contractor mandate, is actually far reaching and impacts employers here in Georgia that receive certain federal funding, including state employees at several institutions within our university system and at the Department of Agriculture,” Carr said.

Black, meanwhile, said the COVID-19 pandemic proves America’s agriculture is paramount. He also spoke of cooperative agreements with the Environmental Protection Agency, the U.S. Food and Drug Administration, and the U.S. Department of Agriculture.

“It goes much further. In our farming communities in the state of Georgia where there is a significant grassroots involvement at the local level for the USDA, there are locally-elected committees of farmers who interact with the federal government who themselves through this action have been told they can no longer serve on those local committees unless we turn to a very desperate attempt and, in my view, almost looking into World War II times of ‘Please show me your papers to enter.’”

Biden, in September and by executive order, directed federal departments and agencies to include a clause in contracts requiring all contractors and subcontractors to adopt COVID Safety protocols.