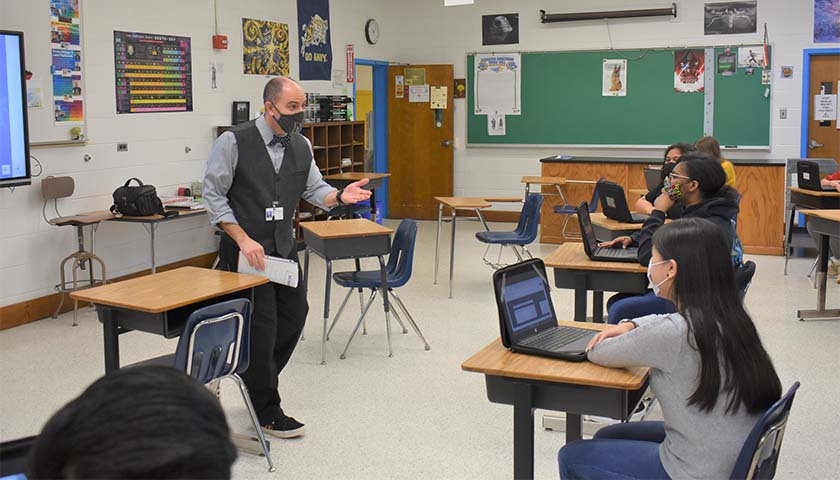 Virginia Beach has several competitive House of Delegates races where Republicans hope to make gains that will help power them to a House of Delegates majority.  GOP candidates are focusing on a mix of law-and-order and education policy in a city where school board politics underlie several of the local House races.

Some of those links have gone unnoticed, but the issues are at the forefront of the races.

“The typical voter does not necessarily at this point even know that my opponent is the vice chair of the school board,” Davis said.

Supporters of the school board recalls are collecting signatures outside voting places, but Davis said most voters don’t know about the recall efforts, which were launched fairly recently.

Davis said that he and the other candidates aren’t singling out education and are also focusing on public safety and economic messages. But he said, “I do think that the voters giving more weight to education, to safety of their children in the classroom, as well as the economy and a lot of things that are still hurting.”

Senator Bill DeSteph (R-Virginia Beach) said, “You have parents who are coming out who have never engaged before politically, and had it not been for the issues in our schools, and our school board, then these parents would never be coming out to vote, let alone be paying attention to who to vote for.

The school board has seen heated public comments and internal division over virtual learning, mask policy, transgender policy, equity initiatives, and explicit books, with Manning often leading the conservative charge against the majority, including Melnyk.

Davis said the transgender issue isn’t at the forefront of the races, but he said parents are worried about policy that teaches children they’re either oppressors or victims based on skin color.

Tim Anderson said at a recent event, “We must follow the Florida example and bar Critical Race Theory [CRT] in our schools. Not just Critical Race Theory, but diversity, equity, and inclusion is the new word. I don’t have any problem with the words diversity, equity, and inclusion. but I don’t want school teachers having to watch videos that say you’re racist because you’re white.”

School Board Member Beverly Anderson told The Virginia Star, “The whole thing for me about this Critical Race Theory was put out there by the Republicans in general to just stir up their base.”

She said, “They’re saying that we are teaching CRT and we’re not. We’re not teaching CRT, it’s not part of our curriculum, it never has been.”

DeSteph said the issue of explicit curriculum is playing a significant role, and is linked to Democratic gubernatorial candidate Terry McAuliffe’s disastrous comment about parents in education.

Statewide issues are also entering the race. Virginia Beach GOP candidates are warning about safety for students after sexual assaults in Loudoun County highlighted weaknesses in laws and policy around crime in schools.

DeSteph listed educational policy issues: “The Critical Race Theory, the transgender policies, the security issues in our schools, pulling the police officers out of our schools, allowing the pornographic materials that if two children were to engage in the activities shown in these books, graphically shown, that the kids would be arrested and charged with child sexual assault. So yeah, I believe all of this has come into play in this election, and I’m seeing a lot of moms who are over it and upset and disgusted.”

“Virginia is woefully last with teacher salary. I don’t want to say we don’t value or respect our teachers, but from a pay perspective, that is exactly what we don’t do. We don’t value teachers as we should,” Melnyk told You Can’t Beat Blue in October.

Virginia Beach has a strong military presence that didn’t always vote for former President Trump. Republicans are hoping to win by retaking lost ground among some of those moderates, and Republicans both locally and across Virginia have high enthusiasm.

Melnyk herself is an example of a former Republican alienated by the Trump-era GOP. In 2021, Melnyk switched from Republican to Democrat after four years with Trump at the helm of the party.

“Is it really unusual, right now, that people have left the Republican Party considering the last four years with our former president and all of the events and the divisiveness over the years? None of my friends who are Republicans are surprised by this,” Melnyk told The Virginian-Pilot in March.

On the flip side, Republicans say the education-public safety combination is resonating with some former Democrats.

“It feels like a reverse 2017,” Davis said. “There were moderate Republicans that, right or wrong, because of Donald Trump, thought our party had kind of come off the rails a little. And they were casting what they considered a protest vote, even though they saw themselves as Republicans. We’re starting to see that this year, where there are Democrats, who as a protest vote over what they see as the Democratic Party going way to the left, are voting for Republicans.”

On Monday, Beverly Anderson said, “Has the Republican message been stronger out there? They sure have been yelling a lot, I can tell you that. But there’s an awful lot of silent majority out there too, I’m hoping. We will see what happens tomorrow night.”

Eric Burk is a reporter at The Virginia Star and The Star News Network. Email tips to [email protected].
Photo “Virginia Beach Schools” by VBSchools.