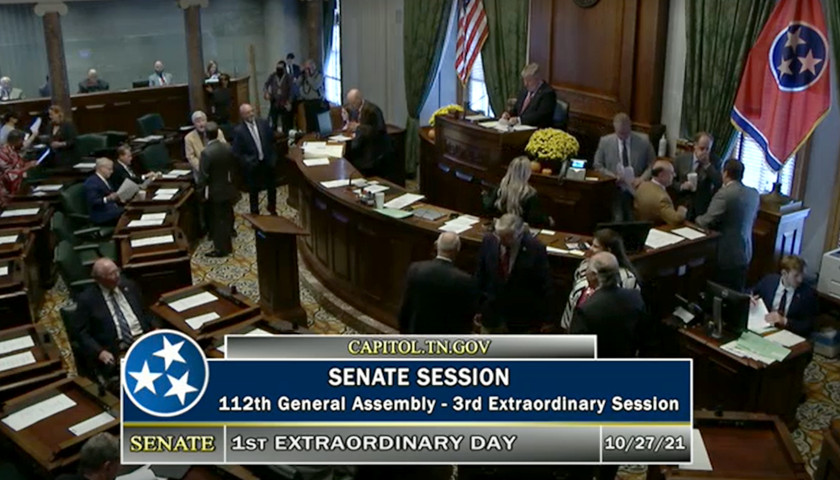 The two chambers of the Tennessee General Assembly met Wednesday in floor session for less than an hour to organize for the Third Extraordinary Session of the 112th General Assembly, which will focus on COVID-related issues.

Special Session III was called on October 19 by Tennessee’s Lt. Governor and Speaker of the Senate Randy McNally and Speaker of the House of Representatives Cameron Sexton in response to the written request of two-thirds of the members of each house, even as legislators were engaged in the Second Extraordinary Session called by Governor Bill Lee taking up $884 million in taxpayer giveaways for Ford Motor Company’s $5.6 billion electric vehicle project to be located on the Memphis Regional Megasite known as “Blue Oval City.”

Both chambers adopted rules, based upon on the standard rules of procedure, but tailored for the truncated timing of a special session related to the scheduling of when bills can be heard.

While McNally kept in place the Senate’s standing committees, with the exception of Sen. Brian Kelsey (R-Germantown) who temporarily stepped down from his role as chair of the Education Committee as he deals with allegations of federal campaign finance violations, Sexton established eight committees specifically for the third extraordinary session.

The composition of the House Public Health Committee of the Third Extraordinary Session is, for all intents and purposes, completely different than the Health and Safety Committee of the Second Extraordinary Session, which overwhelmingly passed along party lines a heavily-amended version of HB8003, which sought to deal with many of the issues being taken up in this week’s special session.

Many of the bill descriptions appear to be duplicative of other bills, but could still be amended to different effects.

A total of nine bills were filed by McNally and Sexton, appearing to deal with many of the same topics as those filed by members.

Additionally, the two speakers filed companion joint resolutions SJR9005 and HJR9005 condemning the effective taxation of Tennesseans resulting from federal overreach in enforcing unconstitutional COVID mandates or restrictions and requirements. The resolution urges the state’s attorney general to initiate or intervene in one or more civil actions or, alternatively, seek relief in federal court.

McNally, as recently as last month, held the position that the General Assembly could not pass any state law that would make President Joe Biden’s executive order relative to vaccine mandates for employers with 100 or more employees any more unconstitutional.

Meanwhile, on Tuesday, U.S. Senator Marsha Blackburn says that she is constantly hearing from constituents that workers are being threatened with losing their jobs over Biden’s mandates.

“Every day I hear from law enforcement officers, first responders, airline personnel, healthcare professionals and retail workers in the Volunteer State who are facing an impossible choice: either comply with the Biden administration’s sweeping vaccine mandate or lose their livelihood,” Blackburn said in an on-line statement.

A full slate of committee meetings has been scheduled for both chambers on Thursday, the details for which can be viewed here.

Laura Baigert is a senior reporter at The Star News Network, where she covers stories for The Tennessee Star and The Georgia Star News.