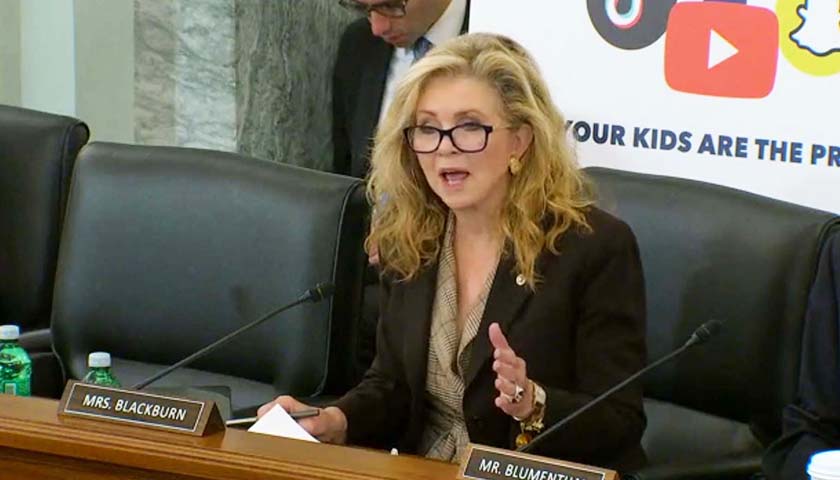 A U.S. Senate committee investigating the promotion of material harmful to young people on social media expanded beyond Facebook and Instagram Tuesday to include the video-sharing sites YouTube and TikTok as well as the Snapchat messaging application.

Therein, Sen. Marsha Blackburn (R-TN) deplored the health-threatening viral challenges (e.g. binge drinking, the infamous “cinnamon challenge”), enticements toward illegal drugs, encouragements to engage in drastic dieting and presentations of child-sex abuse that she said have been purveyed to children and teens via these websites. She raised particular alarm regarding minors she said have been led into illicit sexual relationships on Snapchat.

“In the weeks leading up to this hearing, I’ve heard from parents, from teachers, from mental-health professionals who are all wondering the same thing: How long are we going to let this continue?” the senator said.

Blackburn and many of her colleagues on both sides of the aisle are now stressing that drawbacks to youngsters’ use of social media go well beyond Instagram.

“We’re hearing the same stories and reports of the same harms about the tech platforms that are represented here today,” subcommittee Chair Richard Blumenthal (D-CT) said. “I’ve heard from countless parents and medical professionals in Connecticut and elsewhere around the country about the same phenomenon on Snapchat, YouTube and TikTok.”

Blumenthal said he was particularly disturbed by YouTube algorithms allegedly steering teens toward videos that promote extreme dieting that can result in eating disorders. He also said he observed that a cursory search leads to videos that promote illegal steroids.

All three social-media executives agreed to soon provide internal information about their products’ impact on children and teenagers. They also assured senators that they are developing more advanced tools to aid parents in overseeing their kids’ use of these platforms. And they all expressed support for tougher regulation.

“Protecting the wellbeing of our community is something we approach with both humility and determination,” Stout told the Senate panel. “Over 500 million people around the world use Snapchat and 95 percent of our community says that Snapchat makes them feel happy because it connects them to their friends. We have a moral responsibility to take into account the best interests of our users in everything we do and we understand that there is more work to be done.”

Blackburn further stated her worry that YouTube, Snapchat and TikTok rely on increased use by young people to become more profitable and are using the data they compile on their participants to encourage overuse.

“These platforms are getting more and more data about our children,” she said. “But do we know what they’re doing with that data…? We have real reason to question how they are collecting and using the data that they get from American children and teens.”

The senator said she is concerned that TikTok, which is based in Beijing, is providing a conduit for the Chinese government to collect details on American consumers.

“Most Americans have absolutely no idea that the Chinese Communist Party is getting their information,” the senator said. “TikTok, despite vague assurances that they—and I’m quoting—‘store data outside of China’ has not alleviated my concerns in the slightest. In fact, earlier this year, they changed their privacy policy to allow themselves to collect even more data on Americans…. The time has come where we must focus on what Congress can do to secure American consumers’ personal data. As a mother and a grandmother I know this is doubly important when it comes to our children.”

Bradley Vasoli is a reporter at The Tennessee Star and The Star News Network. Follow Brad on Twitter at @BVasoli. Email tips to [email protected].
Photo “Marsha Blackburn” by senate.gov.