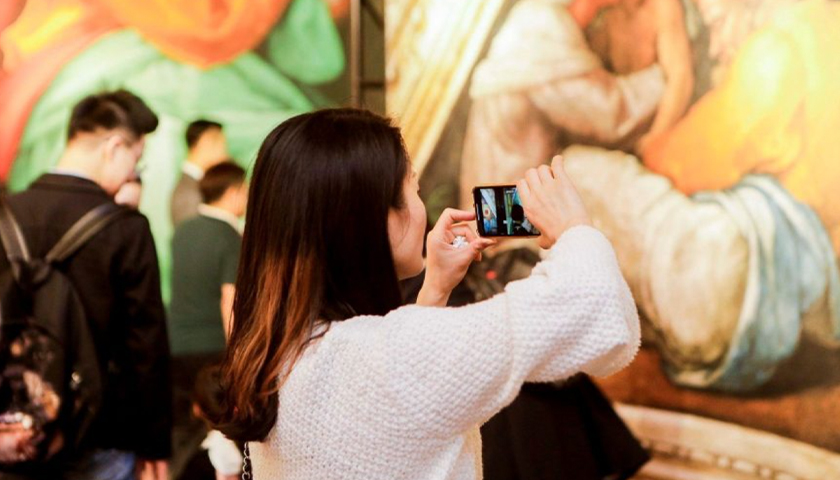 Nashville is set to host the immersive exhibit of Michelangelo’s Sistine Chapel next month. Tickets are available now, with prices starting at $17.50. The limited event will be held at Nashville’s Opry Mills from November 12 through January 16.

The walk-through exhibit averages 60 – 90 minutes, with benches along the way for people to sit and examine the paintings. Throughout the exhibit, Michelangelo’s frescoes from the Sistine Chapel have been recreated onto large panels that bring the details of the art closer for view.

Frescoes are created by painting watercolor directly onto a thin layer of plaster. This technique is favored by muralists, due to the durability the plaster adds to the art.

The Sistine Chapel is regarded as one of Italy’s most treasured landmarks, due much in part to the artwork inside the chapel. The work was commissioned in 1508 by Pope Julius II, who tapped Michelangelo di Lodovico Buonarroti Simoni – known simply as Michelangelo – to update the chapel’s ceiling. The modest chapel was previously adorned with a simple blue sky with a few stars.

At first, Michelangelo, a celebrity in his own time, rejected the project. He said he preferred to work as a sculptor — he had just finished his famous statue ‘David.’ But he was eventually persuaded.

Originally the fresco was to focus on the twelve Apostles, but in the end, the elaborate work contained more than 300 figures. The curved ceilings introduced new challenges to Michelangelo, and during the four-year project, he had to learn how to use forced perspective in his work.

Rated one of Atlanta’s best exhibitions, many have given the showcase five-star reviews. The New Yorker said that “one can look for the first time in-depth at the magically painted faces in Michelangelo’s work. The joy of the new exhibition is to see those faces up close and intensely.”

In an interview, Martin Biallas, the producer for the exhibition, said that “when you go to the Sistine Chapel, you stand in line, forever, once you get in you’ve got 20 minutes, you’ll be with a thousand or so people, they’ve got six million visitors a year. So my idea was, how can we bring it up close?”

He continued saying that during renovations, the Sistine Chapel allowed a photographer to take pictures of Michelangelo’s work, and based on those pictures Biallas and his team were able to recreate the frescos onto 36, three by six-meter panels.

All ages are welcome to visit the Sistine Chapel exhibition. The opening hours will be 10 a.m. – 6 p.m. Thursdays – Sundays. As of press time, masks are required for the event.

Morgan Nicole Veysey is a reporter for The Tennessee Star and The Star News Network. Follow her on Twitter. Email tips to [email protected]
Photo “Art Exhibit” by Chapel Sistine.