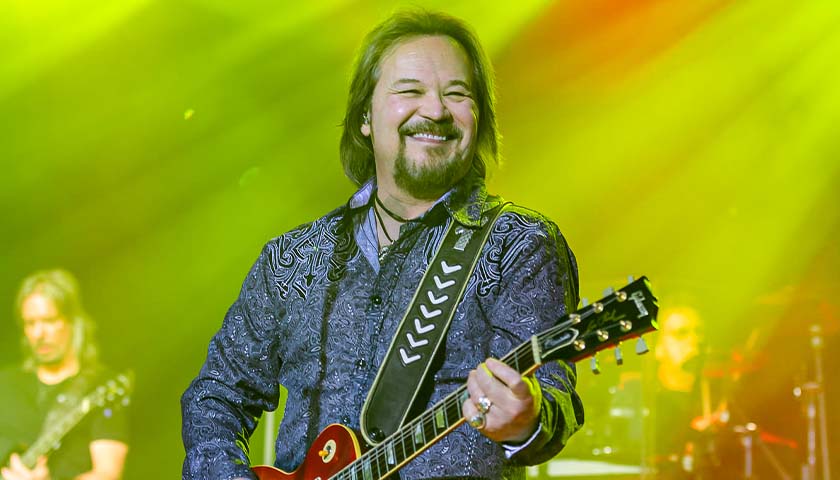 Multi-platinum-selling and award-winning country music artist Travis Tritt announced Monday he will not perform at venues that require proof of COVID vaccination, mask mandates, or testing. As a result, Tritt’s shows in Muncie, Indiana on October 23, Philadelphia, Mississippi on November 6, Peoria, Illinois on November 11, and Louisville, Kentucky on November 13 have been canceled.

In a statement, Tritt said, “I’m putting my money where my mouth is and announcing that any venue or promoter mandating masks, requiring vaccinations, or pushing COVID testing protocols on my fans will not be tolerated. Any show I have booked that discriminates against concert-goers by requiring proof of vaccination, a COVID test, or a mask is being canceled immediately. Many people are taking a firm stand against these mandates around the country, and I wholeheartedly support that cause. I have been extremely vocal against mandates since the beginning. This is a sacrifice that I’m willing to make to stand up for the freedoms that generations of Americans have enjoyed for their entire lifetimes. There are plenty of promoters and venues around the country that appreciate fans and the freedom of choice in this great country, and those are the promoters and venues that I will be supporting.”

Tritt concluded, “I’m sorry for any inconvenience this situation creates for anyone who had purchased tickets to these shows. We will try to reschedule unrestricted shows in these areas as soon as we can.”

Tritt is not alone in canceling shows at venues that require COVID-19 vaccinations and mask mandates. In September, English rock star Eric Clapton vowed not to perform in venues that demand patrons be vaccinated. Chrissie Mayr, a New York-based stand-up comic and podcaster, also declared her war on vaccine mandates via social media. Mayr tweeted on August 3 that she will no longer play New York City clubs that demand patrons be vaccinated to attend.

Kaitlin Housler is a reporter at The Tennessee Star and The Star News Network. Email tips to kaitlinhousler.reports@gmail.com
Photo “Travis Tritt” by Sweetland Amphitheatre.