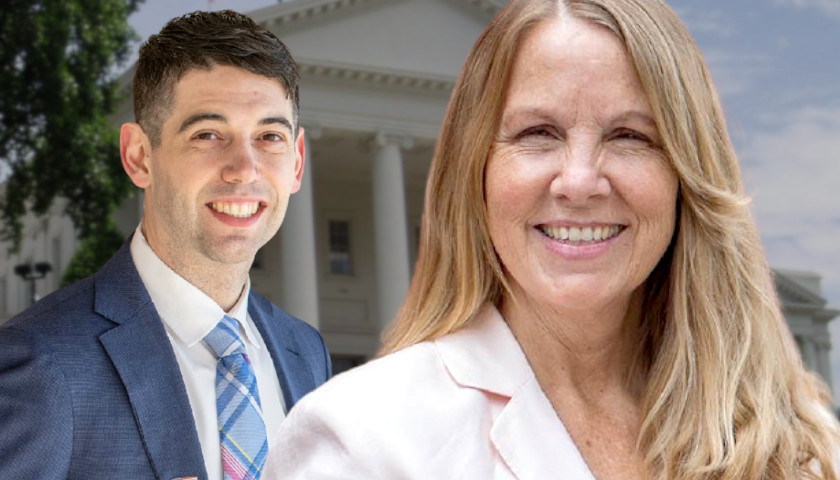 Virginia House District (HD) 10 is one of Republicans’ best chances to flip a House seat in the election; Republicans hope to retake the majority by winning a net six seats. The district includes part of Loudoun County, where the local school board has become a battleground and a national testing ground for the GOP’s new messaging on education. Statewide politicians have made repeated stops in the area, and GOP challenger Nick Clemente and Delegate Wendy Gooditis (D-Clarke) have together raised over $2 million, placing the district number one among the 100 House seats for fundraising, according to The Virginia Public Access Project.

“I think Gooditis is probably the second most likely Democrat to lose in the House,” CNalysis Executive Director Chaz Nuttycombe said. “I think Nick Clemente is definitely the strongest recruit that the GOP has going up against the Democrats.”

HD 10 is a new district composed of parts of Loudoun, Clarke, and Frederick counties. After the 2010 census, population growth required the addition of districts to represent the region, so HD 10 was created, taking pieces of HD 33, 18, and 29.

“Loudoun used to be a very competitive swing county in old Virginia, we’re talking about the Obama era and whatnot, but not really anymore. Look: you can bet your bottom dollar Terry McAuliffe is going to win Loudoun County by double digits, but he could still win Loudoun by double digits and lose statewide,” Nuttycombe said.

Republican Randall Minchew was the first to represent the newly relocated seat, winning in 2011 against Democrat David Butler 58.38 percent to 41.52 percent. In 2013 and 2015 Minchew held his seat by increasing margins.

During the 2016 presidential election, the district voted for Hillary Clinton 49.02 percent to 45.15 percent. In 2017 now-Governor Ralph Northam took the district with 54.10 percent support.

As part of the 2017 blue wave across Virginia following Trump’s election, Gooditis defeated Minchew 51.9 percent to 48.01 percent. She defeated him again in 2019 52.31 percent to 47.62 percent. Gooditis’ win is due in part to the district’s population growth.

“That’s the big thing that flipped the seat blue in 2017, actually getting these new voters, who are Democratic leaning, to come out and vote,” Nuttycombe said. “A lot of the growth, though, is kind of in the more eastern part, but the area still has Leesburg, and there’s a lot of growth in Leesburg as well. ”

Since the addition of HD 10, the region has continued to grow. In the 2020 census, Loudoun County had the highest population growth in Virginia — from 315,479 people in the 2010 results to 420,959. HD 10 is also seeing profound demographic shifts, with growth across multiple ethnicities as well as growing amounts of young people.

“Younger people have moved into the county as well, and they tend to be, I wouldn’t say necessarily liberal, but tend to be more libertarian on a lot of issues,” GOP Chair for the 10th Congressional District Geary Higgins said.

The district has rural strong Republican precincts as well as some precincts that lean Republican and Democrat. It also includes several strongly Democratic precincts near Leesburg and on its eastern edge, according to VPAP.

Clemente told The Star, “It’s kind of a microcosm of America. We have rural, we have suburban, and then we have Leesburg which is the largest town in the state. Not quite a city but still a little city feeling here as well.”

“If we can be competitive in Loudoun, we can win the state,” Higgins said.

Gooditis has an incumbency advantage, but Higgins said that comes with some liabilities.

“Loudoun is a county that in 2011 went entirely red, and then in 2016 was about two-thirds, and then in 2019, things went the other way. But that was a different world then, and a different set of issues then. Through that period, Democrats were gaining control and power but didn’t have it. Today, they’ve got the power and people are seeing the fruits of that, and they’re saying, ‘Wait a minute, this is not what we’re after,'” Higgins said.

That mirrors Republican hopes across Virginia. With Trump off the ballot and Democrats controlling both federal and state elected offices, Republicans hope to win back independents who were turned off by the former president but who are frustrated by Democratic policy. Statewide, they’re using messaging focused on protecting education, public safety, and lowering taxes.

“[Gooditis] raised the cost of living on everyone through gas taxes, through utility tax rate hikes, you can’t even sell your house without an additional tax thanks to Mrs. Gooditis’ leadership. And then on top of that, for someone who claims to be fighting for the people who are struggling, we haven’t heard anything from her about the grocery tax,” he told The Virginia Star.

Battles over virtual learning, equity initiatives, and transgender policy have repeatedly drawn national attention to Loudoun County Public Schools (LCPS), and boosted local engagement with conservative politics, including a recall effort aimed at school board members that received 15,000 signatures. Those issues attracted Republican candidates for the gubernatorial nomination to the district repeatedly, and continue to draw the GOP ticket back.

Clemente didn’t mention those issues when speaking with The Star, and said he hasn’t been working with efforts to recall school board members. Instead, he highlighted the most recent LCPS controversy — an alleged sexual assault by a ‘gender fluid’ student that the district mishandled.

“Now the one thing that has really fired me up though is the sexual assault and the fact that in Loudoun County we can’t even protect our kids from people who assault girls on school property,” Clemente said.

McAuliffe boosted Republican education messaging in a recent debate by saying, “I don’t think parents should be telling schools what they should teach.”

Clemente said, “I think the fact that Mr. McAuliffe said parents shouldn’t have input in our schools is another mind-boggling comment.”

Gooditis is also using education as a key issue.

“As a career educator and mom of two, Wendy understands that our communities are only as strong as our schools. She is focused on getting kids back in school as she knows that they are missing critical learning time amid the COVID-19 pandemic,” her website states. “Wendy is also committed to paying teachers a fair and liveable wage. Both her mother and grandmother were public school teachers and union members, so she understands firsthand the impact of underpaid educators and the vital support unions can provide.”

Other key issues she highlights include worker protections, expanding healthcare access, and protecting the environment. She touts her legislative record supporting COVID-19 relief, prescription drug transparency, COVID response aid for schools, a teachers’ pay raise, and a state police pay raise. She’s the Vice Chair of the Agriculture, Chesapeake, and Natural Resources Committee, and Co-Chair of the bipartisan Virginia Environment and Renewable Energy Caucus, and advocated for the Virginia Clean Economy Act. In 2021, she sponsored legislation that became law that expands legal protections for domestic workers.

Former GOP candidate for Loudoun supervisor Attorney Charles King is representing one of the targeted school board members. King summarized, “Del. Gooditis is appealing to teachers by talking about salaries and benefits. Mr. Clemente is targeting parents by discussing crime in schools and Critical Race Theory.”

“Conservatives are pretty rabid over Loudoun County Public Schools, that’s always been in the media. But I don’t know that that’s actually going to come to fruition with a major swing for the Republicans, I really doubt that,” Nuttycombe said. “The only evidence for where that could be true is if Loudoun has a major swing towards the Republicans compared to the other swings in every other locality. If it sticks out like a sore thumb.”

Gooditis has raised about $1.3 million.  Her top cash receipts include $135,000 from the House Democratic Caucus; $92,500 from the Clean Virginia Fund; $51,250 from The PAC for America’s future, a PAC focused on protecting legislative majorities by supporting key candidates; $35,000 from Senator Jennifer McClellan’s (D-Richmond) Virginia United PAC, and $30,000 from Sonjia Smith.

“TV in northern Virginia is really expensive, extremely expensive. So, you’re coming into a district that’s a tossup. You got to get a lot of money to get your ads out there. So it’s very important that both of them have that money,” Nuttycombe said. “I think that’s one of the things that makes Clemente such a good candidate, is his financial prowess in terms of fundraising.”

Statewide candidates from both parties have made their presence known across northern Virginia, including in HD 10.

“For Gooditis to win, Youngkin can’t make too many gains in Loudoun. I think he’s going to do better than Gillespie in Loudoun, and Gillespie got just under 40 percent, I think. Youngkin is topping at 41 percent, maybe 42 at most his ceiling is 43,” Nuttycombe said.

Higgins said, “I think that a rising tide lifts all the boats. I think that the same issues that ultimately are going to carry Glenn into the governor’s mansion are going to help Clemente’s campaign.”

“I believe the issues moving the voters this election cycle are the economy and COVID recovery, but Mr. Clemente’s views will energize Republicans and Conservatives,” King said. “In an off-year election, the outcome will be determined by who turns out? With Trump gone, do more Democrats stay home?  How motivated are Black voters to support the Democratic ticket?  Does the specter of Critical Race Theory cause a strong turnout among Republicans?”

King concluded, “Del. Gooditis is an incumbent in a swing-district is the favorite, but Mr. Clemente is still in game, the race is close and either candidate can win, depending on who shows up.”