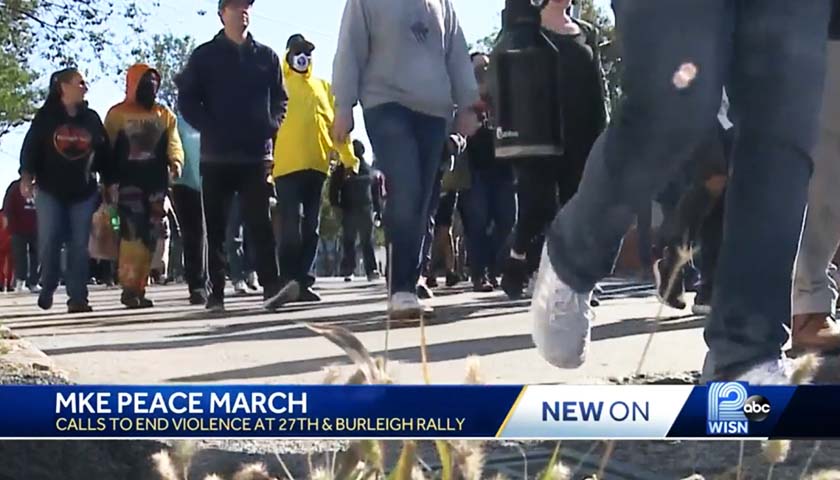 A “Citywide Intergenerational Peace March” was held in Milwaukee on Saturday by community members in response to the rising levels of violence. WISN 12 reported that this year, Milwaukee has had 152 homicides, and 710 non-fatal shootings to date, which is more than double the number of shootings from 2019.

Both residents and different organizations participated in a march for peace, calling for a stop to the violence. Video footage of the march by the news outlet appears to show about 100 participants.

WISN 12 reported that, “The peace march began on the corner of North 27th and West Burleigh streets and proceeded to Sherman Park, where a closing rally was hosted with violence prevention resources available to marchers.”

Several government-sponsored organizations, including the City of Milwaukee Office of Violence Prevention, 414 Life, and the Medical College of Wisconsin took part in the peace rally. Jessica Butler, a 414 Life activist, told WISN 12, “We’re all here fighting for the same reasons.”

Churches were also present. “As a church, we take a stand to denounce the violence that has been happening,” Refuge Fellowship Church Minister, Candace Lewis said in an interview with WISN 12.

The march was also honoring victims of gun violence. “It’s still surreal. I miss her. I know she’s guiding me and helping me through,” Carrie Scott-Haywood said. Scott-Haywood was reportedly marching for her daughter who was a victim of domestic abuse.

The Milwaukee Journal Sentinel reported that, “A record 190 people were killed in homicides in 2020, and through the first nine months of 2021, that rate has not slowed. More than 1,400 people have been injured in nonfatal shootings since January 2020, according to the Milwaukee Homicide Review Commission.”

Earlier on in October, the Sentinel reported that 50 violence prevention advocates spoke out against the skyrocketing violence in Milwaukee following the death of an 11 year old girl who was sitting in a car at an intersection.

“Please come out of your home. If you see an argument or a fight on your block, if you know someone in your family that’s engaged in shooting and stealing cars, talk to them,” Reggie Moore, the director of violence prevention policy at the Medical College of Wisconsin, said during that press conference. “It’s not just on programs to solve this problem. This is on all of us who live and care about the City of Milwaukee.”

Hayley Tschetter is a reporter with The Minnesota Sun and The Wisconsin Daily Star | Star News Network. Follow Hayley on Twitter or like her Facebook page. Send news tips to hayley@volente.biz.
Photo “Milwaukee Peace March” by WISN 12 News.