Jen Psaki: Biden Wants to Use Pandemic to ‘Make Fundamental Change in Our Economy’ 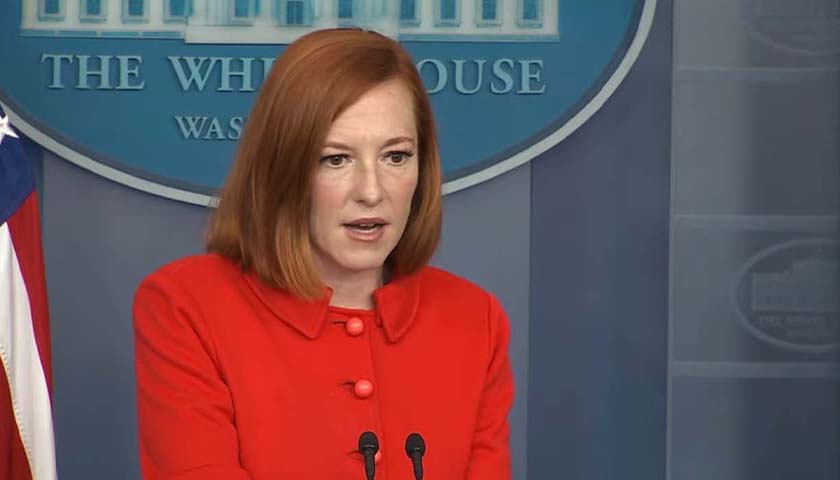 When asked during the White House press briefing whether some programs in Biden’s $4.5 trillion budget proposal should get cut, Psaki rejected the notion, asserting that the pandemic was the perfect opportunity for Democrats to exploit the pandemic.

“The president wants to make fundamental change in our economy and he feels coming out of the pandemic is exactly the time to do that,” Psaki told reporters.

It did not go unnoticed that the White House is focusing on phony, non-pressing issues like “climate change” and “universal pre-K,” rather than the tsunami of disasters Biden has caused since assuming office.

“It’s notable that Psaki highlighted the ‘climate crisis’ and not, say, the border crisis, inflation crisis, supply chain crisis, fuel shortage crisis, or any of the other crises Biden has so far created,” Townhall pointed out.

What Psaki’s answer also reveals, though, is urgency from the White House for Democratic leaders in Congress to deliver on the president’s legislative agenda sooner, rather than later, as congressional Democrats’ fortunes take a bleak turn ahead of the 2022 midterms just more than one year away.

“Rule one: Never allow a crisis to go to waste,” Emanuel said during an interview after the 2008 election. “They are opportunities to do big things.”

He reprised the quote in March of 2020 at the start of the pandemic.  “Never allow a crisis to go to waste,” Emanuel said on ABC’s “This Week.”  The former Chicago mayor used the phrase as Democrats were trying to push forward unrelated polices into the $2 trillion stimulus bill that was being negotiated in the Senate.

Now, a year after promising to end the pandemic, Biden is using the ongoing crisis to inflict a grotesquely bloated budget on the American people.

.@PressSec: "The president wants to make fundamental change in our economy." pic.twitter.com/fTMS7bW2F7

During the same press briefing, claimed that the vaccine mandates—that are causing staff shortages in multiple industries—are “good for the economy.” She went on to ridicule allegations that the “little hubbub” over the weekend at Southwest Airlines was about the regime’s draconian vaccine mandates.

“I know there was a little hubbub…about Southwest airlines. We now know that some of those claims were absolutely false and actually the issues were completely unrelated to vaccine mandates.”

.@PressSec says vaccine mandates are 'good for the economy'

"I know there was a little hubbub…about Southwest airlines. We now know that some of those claims were absolutely false and actually the issues were completely unrelated to vaccine mandates." pic.twitter.com/S08ZbfZBEt

According to conservative commentator Dan Bongino, he’s heard from multiple Southwest insiders now who have corroborated American Greatness’ reporting on the massive service disruptions over the weekend.

Bongino said that he’s heard from “a lot of the pilots,” who generally enjoy working for Southwest, but “felt betrayed by the vaccine mandate.”

“They had some sick time they had to take, some of them felt like they were stressed out,” Bongino explained. He said they told him it was not an illegal job action, and they really shouldn’t fly when they are stressed out.

A Southwest pilot called in to the Clay Travis and Buck Sexton Show on Tuesday, concurring that what happened over the weekend was definitely “pushback.”

“There was no conspiratorial job action that has been discussed, initiated, voted on—nothing like that whatsoever,” he explained. “What you’re seeing is kind of a perfect confluence of things coming together for a perfect storm.”

The pilot said that the airline did “suffer a malady” last week with the air traffic control issues, but the vaccine mandate was also playing a huge role.

“There are a considerable amount of pilots who are not taking this vaccine. Many of them are willing to give their jobs away if they have to,” he told the hosts. “Especially the more senior captains.”

“What’s happening here is our sick time, and all the benefits —a lot of stuff gets left on the table when you retire if you don’t use it,” the insider said, adding that pilots were using a ‘just in case’ mindset’ to start using up those hours.

Debra Heine is a reporter at American Greatness.
Photo “Jen Psaki” by The White House.