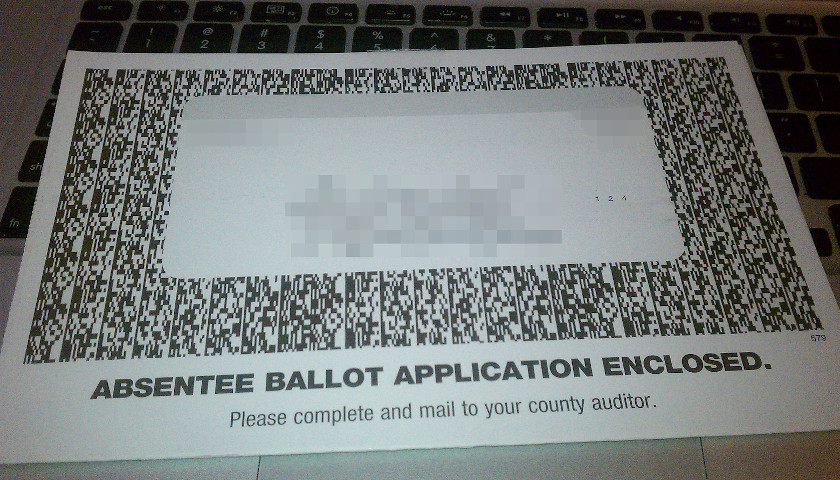 In a case of what she says could be for no other purpose than vote stealing, a DeKalb County voter had her address changed and an absentee ballot requested for the November 3, 2020, presidential election, telling her story to The Georgia Star News exclusively in order to share the information with the public.

“Please get this information out – it is very important,” Mary Williams Benefield told The Star News.

Benefield is a lifelong DeKalb County resident who has lived at the same house for the past 10 years and voted in at least three election cycles while living at that address.

A registered voter since 1992, when Benefield went to cast her vote during early voting at her voting precinct for the November 3, 2020, general election, she was informed that she had requested an absentee ballot.

To that, Benefield says, “I absolutely DID NOT.”

But, because the absentee ballot was on record as having been requested, Benefield was only able to cast her vote via a provisional ballot. She also signed an affidavit attached to a clipboard, attesting to the fact that she had not requested an absentee ballot. Benefield told The Star News that she was one of “MANY” she saw who went through the same process.

When Benefield returned home, she went to the MyVoter page on the Georgia secretary of state’s website. While on the website, she discovered that her address had been changed from her house in Tucker, Georgia to an apartment also in the same town.

“I had not moved, I had not changed my address,” and Benefield added a disturbing point, “I had NO knowledge that any record of mine had been altered in any way.”

Benefield said the only change relative to voting that she was aware of was a notice she received in July 2019 that her polling location changed from Cofer Library to Wesley Center. Benefield supplied The Star News with a copy of the new polling location notification from DeKalb County’s Voter Registration Office postmarked “07 Jun 2019” adjacent to the way her voting record appeared with the incorrect address.

As she explains it, on November 20, 2020, Benefield went to the voter registration office on Memorial Drive to correct her address.

It was a process that not only took three hours, but was also a less than satisfactory customer service experience for Benefield.

Benefield was told that her address was changed in August 2020 by someone who mailed in a change of address and that identification was provided in order for the change to be made.

Benefield asked to see the identification, recognizing that whatever had been presented would had to have been fraudulent.

Unfortunately, Benefield was told she could not see the identification that was presented to affect the address change to her voter information, because it is a matter of voter privacy.

Interestingly, though, Benefield herself was required to fill out a State of Georgia Application for Voter Registration form, which has among its options a change of address.

Benefield filled out the form and told The Star News that she also had to present her driver’s license as a form of photo identification as well as a utility bill, which is a stated “Requirement” printed in the middle of the registration form.

This does not seem to be the process that was followed for the change of address to Benefield’s voter registration made on August 20, 2020.  Benefield’s electronic voter registration record, a copy of which Benefield printed and provided to The Star News, states in the Memo section, “spoke with voter, addr changed per absentee application.”

Benefield pushed the issue with the DeKalb County elections supervisor so that, while she waited, her address was corrected in the system and an updated precinct card was printed that reflected her correct address.

Even though Secretary of State Brad Raffensperger took it upon himself without Georgia General Assembly approval to mail absentee ballot applications for the November 3, 2020, general election to Georgia’s 6.9 million voters, Benefield told The Star News she received several actual absentee ballots in the mail.

While Benefield said she probably received seven absentee ballots herself, between the four voting age adults living in the home, a total of about 25 absentee ballots for the November 3, 2020, general election were received in the mail.

Benefield was also contacted via text message by someone who identified themselves as being with an organization called Black Voters Matter.  The organization is a 501(c)4 that registered in East Point, Georgia in August 2016 that’s stated goal is “to increase power in marginalized, predominantly Black communities.”

The representative advised Benefield in the text that the organization looked at the public records and found that Benefield “may not have requested a mail ballot for the crucial run off elections on Jan 5th.”

Benefield was asked, “Would you like your ballot mailed to you?”

“NO.  I vote in person. Do not contact me again,” was Benefield’s response.

In discussion with The Star News, Benefield questioned how a third party could be in a position to execute on getting her an absentee ballot and why anyone would even want to go through a third party when it comes to their vote.

Benefield was never advised by DeKalb County elections officials what happened to the provisional ballot she voted on for the November 3, 2020, general election.

According to a form posted on the DeKalb County Voter Registration and Elections webpage as one of many documents to be used by poll workers, the status of provisional ballots is to be recorded.

The four-part form documents with a sequential number the name of the voter and time their vote provisional was cast for each voting day at every voting precinct.

The poll worker must document a code from a pre-assigned list of seven options as to the reason that a provisional vote was cast. Of note is that not one of the seven reasons addresses that an absentee ballot was requested by the voter.

Additionally, there is a section on the form reserved for the use of the registrar’s office. In that section, the registrar is to mark with a check whether the voter’s provisional ballot was either accepted or rejected. Within three business days after the election, the registrar must place the appropriate checkmark and return the original form to the election superintendent while a copy is retained by the registrar and one sent to the secretary of state as well as the clerk of superior court or the city clerk.

It is not clear whether voters other than Benefield ever learned from DeKalb County’s registrar or election superintendent whether their vote was accepted or rejected.

It is obvious that, in addition to notifying the state Republican party of her experience, Benefield has been reflecting on this situation for some time. She told The Star News that what happened to her was a clear case of stealing her vote.

She even went so far as to say that it could not be a case of stolen identity because there were no issues with her credit cards, bank accounts or anything else associated with identity theft.

“Only my vote,” Benefield said about what was stolen.

“There was no other justification for it,” Benefield concluded about the change of address and the subsequent request for an absentee ballot.

Convinced that she is not the only one in DeKalb County that this situation happened to Benefield wanted to get her story out in hopes that others would come forward.

“DeKalb County is every bit as crooked as Fulton County. Are we surprised by this? No. I’m not the only one in DeKalb County this happened to,” Benefield told The Star News.

Effective September 9, DeKalb County Elections Director Erica Hamilton was placed on an extended leave of absence. While DeKalb County elections officials won’t tell voters and taxpayers whether the leave is related to her job performance and whether it is paid or unpaid, Raffensperger said during an interview with CNN that Hamilton’s leave was the result of an investigation that came after The Star News reported that 43,000 absentee ballots DeKalb County counted in the November 2020 election violated chain of custody rules.

Laura Baigert is a senior reporter at The Star News Network, where she covers stories for The Georgia Star News and The Tennessee Star.
Photo “Absentee Ballot Application Enclosed” by Tony Webster. CC BY 2.0.