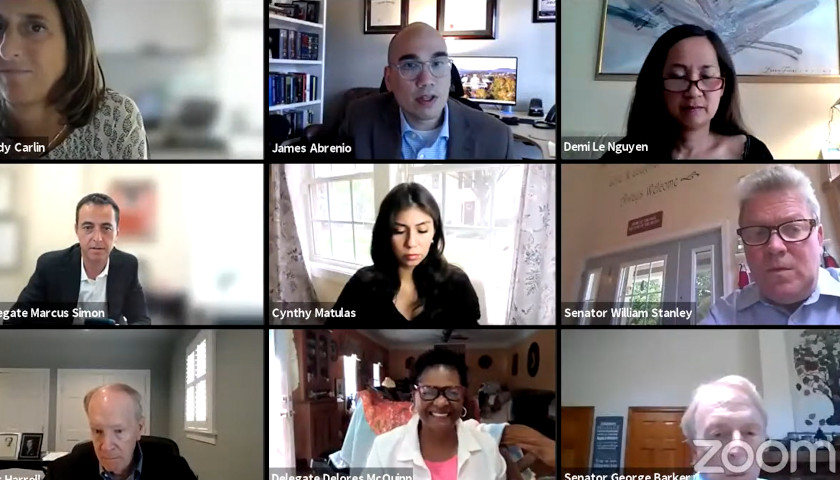 The Virginia Redistricting Commission (VRC) is hearing public comment on its final draft General Assembly maps, which are due Sunday. But the commission is still presenting two sets of maps, one Republican-proposed, and one Democrat-proposed, with no clear path to a consensus on one set of maps that can win with the necessary three-fourths approval from the bipartisan commission. After the hearings this week, the commission is scheduled for a Friday meeting, with an optional Saturday meeting.

“I’m at a loss as to how to go forward,” said Co-Chair Greta Harris on October 2, according to the Virginia Public Access Project.

The two co-chairs take turns leading the meetings, and Harris will be up Friday. “The thought of next Friday’s meeting turns my stomach,” she said.

Although Democratic citizen members have been more willing to break with their own party’s legislators than Republicans on some votes, the commission has split on some party-line votes, according to the Virginia Public Access Project. That includes critical strategic decisions where Republicans voted against proposals to hire one non-partisan legal counsel, and one non-partisan University of Richmond map drawing consultant. The Republican legal team warned that the public might not trust the proposed non-partisan consultant’s independence..

As a result, the commission’s two sets of partisan legal counsel and partisan map drawers have repeatedly presented separate proposals, with differences including definitions of what fair maps are and how much minority protection is required or allowed by law. Although the commission has been able to agree on geographically large regions of those drafts, the most populous regions remain contentious. Senator Steve Newman (R-Bedford), who is a former commissioner of VRC, warned in several meetings that the commission could fail to “land the plane” due to the supermajority required to pass the proposals.

Independent groups like the Princeton Gerrymandering Project (PGP) have warned that some of the Republican proposals unduly favor Republicans, based on arguments that votes cast in the new maps should reflect the actual partisan lean of Virginia’s population. But Republicans say that political data shouldn’t be considered, and as long as the rules are followed, the maps are fair.

On Monday, the PGP proposed a compromise where the commission could take one of the Republican-proposed House maps, and a jointly-created Senate draft, and make minor tweaks to create maps where both Republicans and Democrats get some wins.

“The Virginia Redistricting Commission’s deliberations have been contentious, and according to some spectators, a fraught process. But from a distance, things don’t look that bad,” PGP Director Sam Wang wrote in a memo to the commission. “Although the Redistricting Commission may be feeling fatigued, they are closer to success than they realize. Adjustments to a Republican-drafted Plan A7 in the House of Delegates, and to joint plan C2 in the Senate, provide possible paths to compromise.”

Democrats and some redistricting observers have been relying on PGP analysis. But the proposed compromise faces the same partisan obstacle as the non-partisan map-drawing consultant proposal: Senate Republicans don’t trust the PGP, effectively dooming any advice the PGP offers.

“The Princeton Gerrymandering Project is a Democrat-favorable organization led by Sam Wang. Mr. Wang’s partisanship so skewed his judgement he had to eat a bug on live television,” Senate Republican Caucus spokesperson Jeff Ryer said, referring to Wang eating a bug on CNN after incorrectly predicting the 2016 election.

“A compromise proposed by the Princeton Gerrymandering Project, would, in essence, not be a compromise,” Ryer told The Virginia Star.

Feeling the pressure last week, commissioners discussed the challenge. Harris said, “There was a structure in the way this commission was put together that made this very challenging, to begin with, with no way to break ties, when we get into a loggerhead. And then we have some self-inflicted wounds in picking two attorneys, two map-drawers, not being willing to do subcommittees to be more effective in how we use our time.”