DHS Sec. Says Biden’s Plan Is ‘Working,’ and Has Led to ‘a Drop in the Number of Encounters at the U.S. Border’ 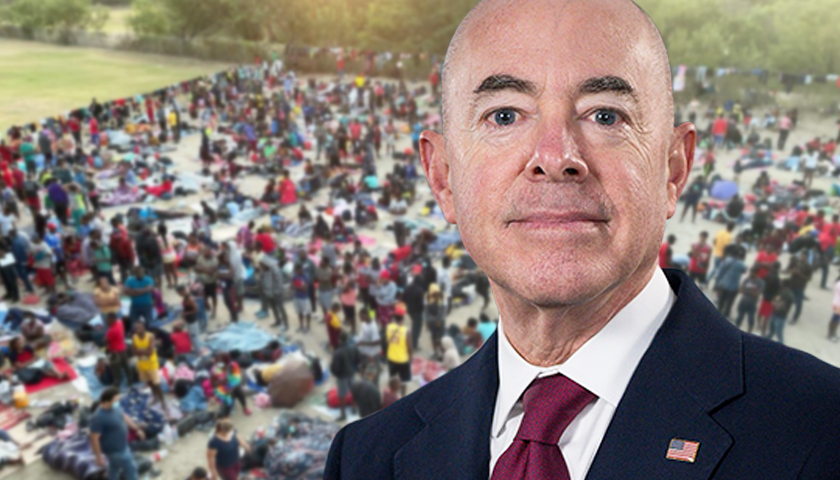 During a Senate hearing Tuesday, Homeland Security Secretary Alejandro Mayorkas claimed the Biden Adminstration’s border policies are “working,” and have led to a drop of encounters at the U.S.-Mexico border.

Mayorkas was responding to Senator Josh Hawley (R-Mo.), who was grilling the DHS chief about the ongoing surge of illegal immigrants at the border during a Homeland Security and Governmental Affairs Committee hearing on “Threats to the Homeland.”

After noting that Mayorkas had previously testified to Congress that DHS had “a plan,” and was “executing the plan,” Hawley pointed out that for two straight months, in July and August, US Customs and Border Protection officials had encountered more than 200,000 illegal immigrants. Hawley said such a staggering number of border crossers hadn’t been seen in decades.

“My question is, when’s your plan going to work?” the Missouri Senator pressed.

Mayorkas responded defensively that “in fact, we are implementing the plan, and I can walk through the measures we’ve taken.”

Hawley shot back: “My question is when is it going to work?”

Mayorkas responded, “it is, in fact, working. We have seen over the last several weeks—if not, the month—a drop in the number of encounters at the United States border.”

In recent days, the border has been swamped with up to 15,000 Haitian migrants who have massed in squalid, third-world conditions in Del Rio, Texas. Thousands of the Haitians have since been removed by Border Patrol, and hundreds more have crossed the Rio Grand back to Mexico.

“We happen to be working very closely with Mexico to increase interdictions,” Mayorkas declared. “We have addressed the issue of recidivism, and if in fact, people have been previously removed, we are referring them to criminal prosecution.”

Hawley stopped Mayorkas to doublecheck whether he was sure the plan was working given that border officials were seeing over 200,000 encounters a month and now a small city of Haitians  living under a bridge in Del Rio.

“Are you happy with what is happening at the border now? Is this success?” Hawley asked incredulously.

Mayorkas repeated his robotic answer about DHS having “a plan,” and “executing our plan.”

“We have a plan. We’re executing our plan, and we will continue to do so,” he said.

“But you just testified that it’s working so I’m just trying to understand,” Hawley responded, confused. “Is this success? Are you telling me this is successful? Your plan is successful currently?”

Mayorkas answered defensively that his department has not yet finished executing its plan, and muttered that he had never suggested it had.

“We continue to do the work that we are required to do to secure our border. That is an ongoing process, and indeed we are executing it,” the DHS Sec insisted, sticking to his talking points.

Hawley then asked Mayorkas if he knew how many Haitian migrants remained encamped near the US. border.

The DHS secretary said he didn’t have Tuesday’s numbers but said there were fewer than 10,000 Haitians.

“I just want to go back to your statement earlier to me that you have a plan and that it’s working. Is 13,000 to 15,000 people crossing into the United States just last week, is that working?” Hawley asked.

Mayorkas said the situation in Del Rio was somehow different from what’s been happening in other parts of the southern border because it was a rapid escalation of people arriving.

“Mr. Secretary, this happened on your watch,” Hawley said.

He reminded Mayorkas that every time he testifies on Capitol Hill he says “their plan is working,” but things keep getting steadily worse.

“Every time you leave, it gets worse and worse. This is a humanitarian crisis in Del Rio. You can spin it any way you want” but the administration’s lax immigration policies are creating the conditions for the border surge,” Hawley charged.

The senator cited a report in the Washington Post that quoted a Haitian woman who decided to travel from Chile to the US with her kids “because they heard, and I quote, President Biden was letting people in.”

Hawley also argued that the Administration sent a welcoming signal when it offered Haitians living illegally in the U.S. Temporary Protected Status in May and halted deportation flights in the summer.

“Don’t you think you bear responsibility for this latest crisis?” Hawley asked.

Mayorkas demurred, saying individuals who arrived in the US after July 29 are not eligible for that status and continued to say that smuggling operations are misleading people into thinking they will be able to cross the border.

But when pressed again on whether his policies had “fostered and fomented the crisis” at the border, Mayorkas tried to pin the blame on smuggling organizations who have been spreading “false information and misinformation” to vulnerable individuals.”

“Well, so, in other words, it’s someone else’s fault,” Hawley scoffed. “All I can say, Mr. Secretary is that sooner or later, this administration’s going to have to take responsibility for the crisis that you have fomented at the border. It gets worse day upon day, and so far, every time we hear from you, it’s somebody else’s fault, something else is going to happen later—it’s really quite unbelievable!”