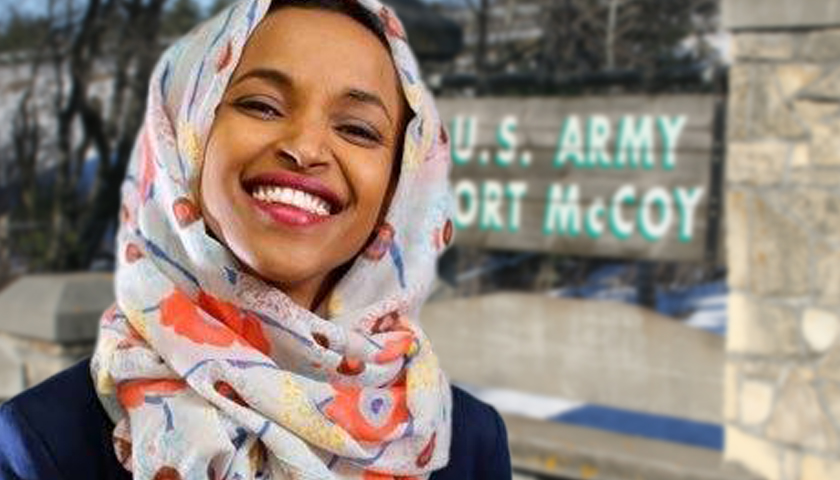 In a tweet, Rep. Omar said, “There are concerning reports of mistreatment faced by Afghan refugees at Fort McCoy. These families fled their homes and left everything behind. They should be treated with compassion and dignity.”

There are concerning reports of mistreatment faced by Afghan refugees at Fort McCoy.

These families fled their homes and left everything behind. They should be treated with compassion and dignity.

She also has been pushing the Biden Administration to increase the refugee admissions ceiling to 200,000 to accommodate the “massive humanitarian need” in Afghanistan, calling it a “a moral responsibility” to care for those affected by the United States foreign policy decisions.

We have a moral responsibility to protect the lives of people impacted by our foreign policy decisions.

As a refugee, I know finding a stable home is a matter of life or death.

We must live up to our promises and increase the refugee cap. https://t.co/tuatury3Xa

The letter Omar co-wrote with Moore shared their concerns about conditions that Afghans who were being resettled in the United States were facing unfair treatment by officials at Fort McCoy.

Omar and Moore said that they were asking that Austin and other United States personnel take steps to “ensure the safe and respectful treatment” of the Afghan refugees. They said that the refugees have “suffered enough” with “having to leave their country because of threats to their safety and security.”

Our office has been working to help as many Afghans as possible.

As a refugee, I know finding a stable home is a matter of life or death.

That’s why we have fought to give other families the same opportunity to come to the U.S. and rebuild their lives. https://t.co/rOZCzIWIg7

Omar, a refugee herself, has been working to get Afghan refugees resettled in Minnesota. Omar said, “Welcoming Afghan refugees to Minnesota will take a combined community effort.” She said that, “As a refugee, I know finding a stable home is a matter of life or death.”

If you would like to help and receive updates on ways to get involved, sign-up here: https://t.co/VnnucphWtv

Omar and Moore went on to request that the refugees be treated with kindness and respect because, “Not only are these families displaced, but they may be scarred by the brutality and barbarity of the Taliban.”

Their letter said, “We urge you to swiftly take action to address these concerns and ensure that any such shortfalls are immediately alleviated and that these vulnerable individuals have access to all their basic needs while they await movement to their final places of refuge in our country.”

As reported by the Wisconsin State Journal, Fort McCoy said in a statement that “the Department of Defense and the team at the base supporting the evacuees are ‘dedicated to treating our Afghan guests with dignity and respect while we care for their needs.’”

The Wisconsin State Journal also reported that two Afghan women complained anonymously about the treatment they had received from Afghan men staying at the base, but reported that the American staff they interacted with were “nice.” The women had also touched on long lines for food and a lack of clothing, which the Department of Homeland Security (DHS) said has been cleared up.

Fort McCoy has allegedly been experiencing some supply chain issues as they adjust to the thousands of Afghan refugees begging temporarily housed there, but a spokesperson says that it should not be an issue long-term. They also have set up a “robust donation system” to continue to help meet the needs of the Afghans.

Fort McCoy has also been dealing with sickness among the Afghan refugees. As was reported by The Wisconsin Daily Star, a measles outbreak occurred among some Afghan refugees who arrived at Fort McCoy. Some also had tested positive for COVID.

Hayley Tschetter is a reporter with The Minnesota Sun and The Wisconsin Daily Star | Star News Network. Follow Hayley on Twitter or like her Facebook page. Send news tips to hayley@volente.biz.
Photo “Ilhan Omar” by Ilhan Omar and photo “Fort McCoy” by Jonathunder CC BY-SA 3.0.