Mayor of San Francisco Goes to Nightclub Maskless, Breaks Her Own Mandate 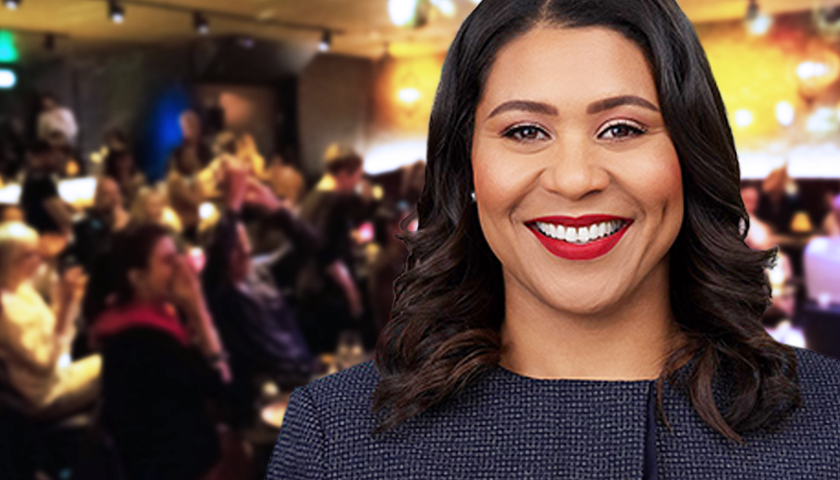 Videos and photos show the mayor at the Black Cat jazz club in the Tenderloin district of San Francisco, along with the Black Lives Matter co-founder Alicia Garza and Raphael Saadiq, according to Datebook. Most attendees at the concert were not wearing face coverings as mandated by the city.

“The fact that we have not been able to enjoy live music in this way since the beginning of this pandemic made it even that much more special and extraordinary,” Breed told the San Francisco Chronicle.

“I was really honored and really in disbelief when I sat here and watched what I felt was history in the making,” Breed added.

San Francisco’s mask mandate, introduced by Breed, states, “Everyone, including people who are fully vaccinated, must wear a well-fitted mask in indoor public settings at all times,” though the mandate allows people to remove their masks when eating or drinking.

“I’ve been very careful, not just because I want to set an example but because I don’t want to get COVID. I also want to make sure that I’m not someone transmitting COVID to other people,” Breed told the Chronicle.

“This entire pandemic has been focused on keeping people safe,” she added.

Breed was seen on Nov. 7, 2020, attending a dinner at the French Laundry restaurant in Napa, California, after the state “strongly discouraged” social gatherings and limited them to three households, according to the Chronicle.

This dinner occurred just one night after Democratic Gov. Gavin Newsom of California attended a dinner at the same restaurant with more people than the state advised, the Chronicle reported.

Breed’s office did not immediately respond to the Daily Caller News Foundation request for comment.