Exclusive Tennessee Star Interview with Eric Trump: The Incompetence of This Administration is Forcing People Back to Us in Massive Droves 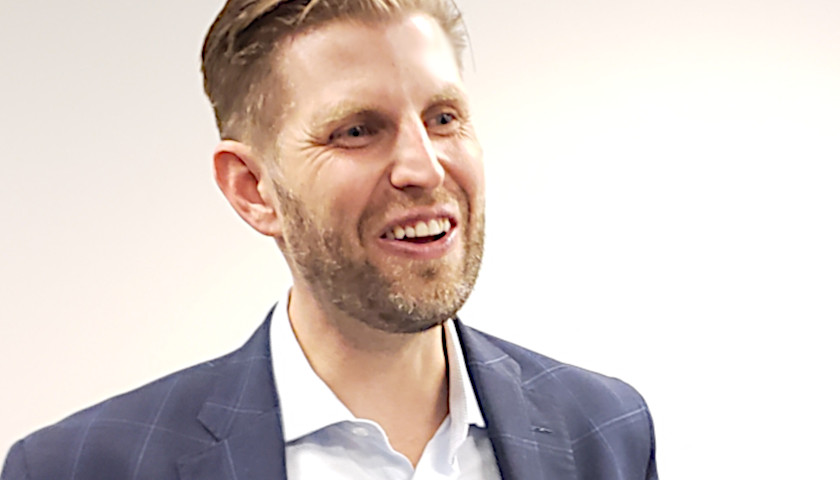 LEBANON, Tennessee – The younger son of 45th President of the United States, Eric Trump, told The Tennessee Star in an exclusive interview after a 9/11 commemoration event in Lebanon, Tennessee on Saturday, that he is not concerned about elections in safe red states because the incompetence of the current administration is “forcing people to come back to us in massive droves.”

“Life is a big pendulum, and I do believe that pendulum is going to swing back in our direction,” Trump told The Star.

Eric Trump was a featured speaker at the Tennessee Conservative Convention that commemorated 20 years the 9/11 terrorist attack and focused on restoring America through faith, family and freedom, The Star reported.

“People want to know what they can do to help,” Trump told The Star; adding, “At the end of the day, people have to get out to vote.”

He emphasized, “These mid-term elections are going to be critical.”

“The fact that Pelosi and Schumer and these people have the control that they do is horribly, horribly scary.  The decisions that are being made in that building, it’s shocking.  It’s made me lose faith in the whole system,” Trump said.

“America was always known as the country that prided itself on continuity of government.”

On the Biden administration, he said, “How could one person at the top being inept literally cause a whole system to be inept?  That should deeply scare people.”

He questioned how it’s possible that not a single battle was lost in Afghanistan, and yet the war was lost.

For someone who told the audience at the event that he knew nothing of the issues and politics, Trump rattled off in rapid fire the outcome of the chaotic withdrawal from Afghanistan.

“How could we be that inept that $86 billion – that’s like 10 nuclear powered aircraft carriers worth of gear that we left them.  So, you had people running around the middle east with guns that were made in the 1950s and 1960s and now they’re wearing night vision goggles and have American sniper rifles and $86 billion worth of gear and black hawk helicopters.  I mean, we couldn’t have taken that stuff home? We had to leave it to our enemy?” Trump said incredulously.

Trump went on to point out the hypocrisy of the other side’s arguments.

“At the same time, they want to attack personal choice.  They want to attack religious freedom.  There’s an absolute crusade in this country against God and everything that stands for.  Let people celebrate the religion that they want in peace.  Every single day there’s another liberty that’s taken away from people and they’re actually contradictory.  The other side says it’s my body, my choice and yet you must be vaccinated.”

Since Trump mentioned elections and candidacies, The Star asked if he had faith that elections could be run fairly anymore.

“I don’t have any coming out of 2020 because everywhere I went, I had a thousand people show up to see me, and I’m not a candidate.  I was a surrogate for a candidate and I’d have a thousand people on a rainy Thursday come out to see me speak.  Yet, I’d be across the street from Joe Biden and 12 people would show up and he would bring Bon Jovi out.  There’s something wrong with that.”

Using the “if it quacks like a duck analogy,” Trump went on to say, “Nobody actually believes that 17 million more people actually voted for Joe Biden – who never left his house in Delaware – than they did Barack Obama in 2008, who was a charismatic guy who had a lot of charm and appeal and everything else.  No one in the world possibly believes that.”

Going forward, Trump said that there needs to be a fight to change election laws.

Acknowledging some of the reports of The Georgia Star News regarding chain of custody documents of absentee ballots deposited into drop boxes during the November 3, 2020 presidential election, Trump talked about other election integrity activities.

“I can tell you a lot of time and effort is being spent on the audits in the various states in Georgia and Arizona.  Those are happening every single day.  A lot of things are being uncovered and they’re not good things.  We saw it with our own eyes. You did, too. Everybody did.”

When asked if he had concerns with states that weren’t considered swing, like Tennessee, that are presumed to be safely red, Trump said no.

“I think no, because, honestly, I think the incompetence of this administration is actually forcing people in massive droves coming back to us.  The amount of people I have coming up to me every day saying I was on the sidelines and I didn’t like the tweets, but now I realize his policies were absolutely spot-on and we miss him and we need that back, we need that energy back, we need that fight back, because that’s what America stands for.  I hear that every single day.  Life is a big pendulum and I do believe that pendulum is going to swing back in our direction,” concluded Trump.

Laura Baigert is a senior reporter with The Star News Network, where she covers stories for The Tennessee Star and The Georgia Star News.