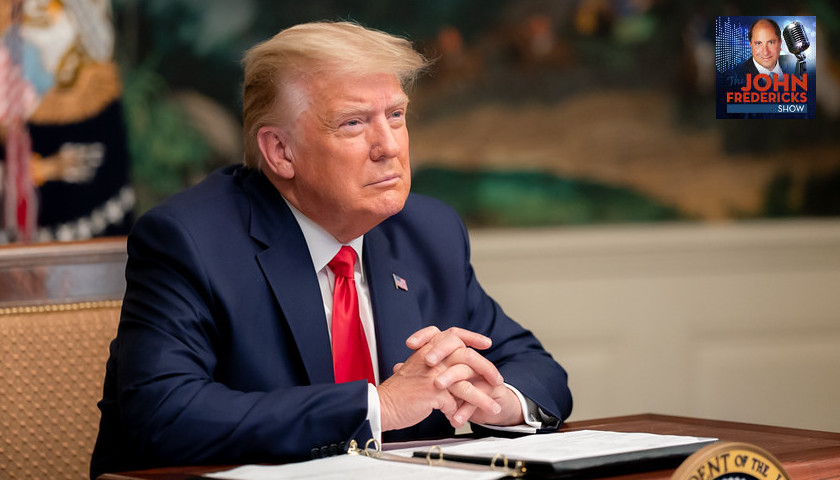 Fredericks: Let’s get to the intel agencies. You were at odds with a lot of them. You were going to be impeached for making a phone call, which was a perfect phone call.

Trump: Well, remember, I came in and they asked me the question about Putin and our intel. And the Intel I had was Comey and all of that stuff. McCabe. And when you look at that side of it, you look at some of the people at CIA.

Because I have a great relationship with a lot of the people in the CIA. But the people at the top were horrible. And they were saying, who do you trust? We had just gone through the fake dossier and all of the things that they’re asking me, who do I trust?

Well, I can tell you, some people I don’t trust were the people that I was dealing with. When I got there, there was a rot and a stench like I’ve never seen before anywhere in anything. And, you know, all the players and you covered all the players better than just about anybody.

Trump: And if I’m supposed to be saying no, great, they’re wonderful. I won’t say it. I’m not going to say it. But you do have great people in there. You have some very talented people. But when I got there, they were terrible. They were terrible.

They were just terrible, absolutely terrible people. And by the way, where’s Durham? Where is Durham? Can you imagine that Durham has disappeared?

Let’s see what he comes up with if he comes up with anything. When I heard they were going to release this during the Biden administration, I said, you got to be kidding. But where the hell is Durham?

Fredericks: He’s nowhere, just like anything that we try to do. You got 19 Republican collaborators, obviously signing off on this $1.2 billion deal.

Fredericks: You have a great relationship with Chinese President Xi. Do you believe that Biden’s weakness is going to motivate him and the CCP, sir, to potentially move against Taiwan?

And honestly, once the COVID came in, COVID, once that whole thing started, my relationship with Xi was like it was with anybody else. It was just too bad. We made a great trade deal. Our farmers are getting rich now because of the trade deal I made with our manufacturers.

It was great. It was a great deal. But I don’t even talk about it. I rarely talk about it. It’s the first time I’ve mentioned it in a long time, because the COVID that China virus is so horrible. And it came from the lab in Wuhan.

Fredericks: Mr. President, you were relentless in getting our manufacturing supply chains back to the United States. Steel, aluminum, lumber, dairy, farming, oil, and gas. Right now, the island of Taiwan is producing about 50 percent of the entire semiconductor industry that we need in the United States.

If that gets shut down, our economy collapses. Can’t make an automobile, can’t make a computer, can’t do a washing machine, a dryer, and an air conditioner.

If you take the oath of office in 2025, which I think you will in January, how can you bring our semiconductor business back to the United States where we’re not dependent on Taiwan?

Trump: We were doing that and doing it big in Arizona. We have a plant, et cetera, et cetera going up. And I hear that Biden has pretty much shut it down. The problem is, it’s so perilous. You’re talking about a place that’s right next to China.

And we’re 9,500 miles away, and we have half of the semiconductors. And most people don’t know what that means. It means that your business literally will shut down.

It will shut down because everything you make, from a toaster, it’s incredible the importance of the semiconductors. And you look at intel. Intel has really lost its way to a large extent. They don’t make the product that they used to make.

We have so many businesses, and we were getting them moving. We were getting Intel and all the other companies we wanted to be built here. It’s like steel. I saved the steel industry with tariffs by putting tariffs.

If I didn’t do what I did, you wouldn’t have a lot, But you need steel. You also need semiconductors. And if you don’t have that, that’s really it’s essentially the same thing. You can’t make your military equipment. You can’t do a lot here.

We are giving all that billions of dollars. They do say it’s $83 million worth of military equipment and here we are giving it away. And we’re talking about chips, and we won’t be able to make brand new versions of what we just gave to the Taliban.

Fredericks: So how do you change it?

Don’t forget, we protect Taiwan. Well, Taiwan, should build its semiconductors in the United States. And I said that to them. I said, well, what are we doing? You don’t pay us an insurance policy. You don’t pay us anything other than you buy $2 billion dollars worth of military equipment every two years.

So we’re protecting you. Well, we want you to build your semiconductors in the United States. We don’t want them built in Taiwan. We want to build. And I was very tough on it. And they were starting to do it.

Then Biden gets in, and they don’t even think about it. They got bigger problems. They have problems, like millions of people pouring through the border, people released from prison. You these countries, and I’ve been saying it for two months, and now they’re finding out.

It’s a terrible thing. You mentioned Virginia. But be careful. The election’s coming up, whether it’s California, Virginia. And you know how they cheat in elections. The Virginia governor’s election, you better watch it.

And the California election, you now have the right to make your own ballot. How about that one? They’ve taken it to a new step. I’ll say this, Texas did an amazing job. They have a strong bill. We won Texas by a lot.

But they say we should have won it by much more because they say in Houston and Dallas, a lot of votes were very strange. Let’s put it that way. But with these two elections, a couple of big elections coming up in areas that are very, very suspect.

Fredericks: It was roads, bridges, shipping lanes. It was trains. This thing, only 18 percent of is going to infrastructure. But you’ve got 19 Republicans flipping with them. And now Biden says bi-partisan negative, another 3.5 trillion down the pike.

So the frustration of people like me, your deplorables, your base is like, why do we work for the Republicans when they never fight for anything? At the end of the day, they’re stabbing you in the back, stabbing deplorables in the back, and selling us out.

Trump: They didn’t fight for the election…