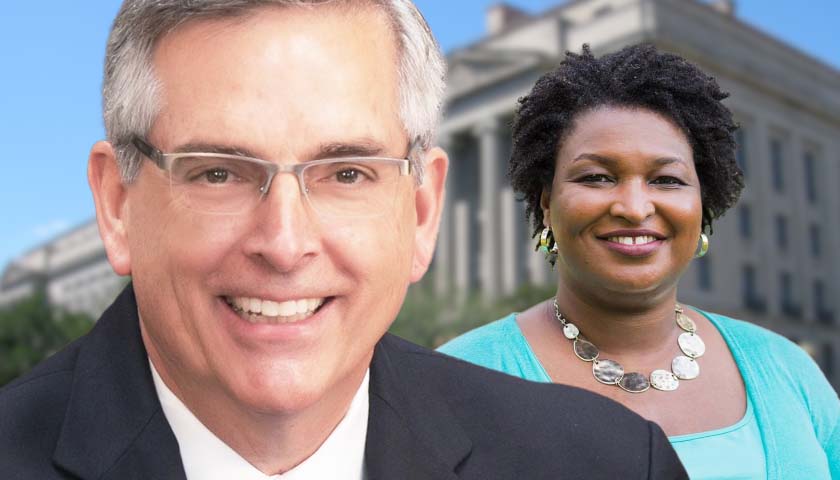 Georgia Secretary of State Brad Raffensperger announced Wednesday he has filed a Freedom of Information Act request (FOIA) with the U.S. Department of Justice to release any records of contact with Stacey Abrams.

Raffensperger said in a press release that he also wants records of contact with Abrams’ Fair Fight Action and 60 other liberal activist organizations.

Officials with the U.S. Department of Justice recently filed a lawsuit against Georgia’s election laws.

“The American people deserve to know who’s really pulling the strings in the hyper-partisan Biden Department of Justice. The many hypocrisies and double-standards in the Department of Justice lawsuit make it clear that Georgia is being singled out for political reasons,” Raffensperger said in the press release.

“This new step will help determine whether the Biden Administration is getting outside help in turning America’s top law enforcement agency into an extension of the extreme left-wing or if the DOJ has been taken over by liberal activists altogether.”

Abrams and members of Fair Fight Action on Wednesday did not return The Georgia Star News’ requests for comment.

Raffensperger, the press release went on to say, filed a FOIA requesting communications the U.S. Department of Justice has had with liberal activist groups and members of Congress about Georgia’s recent election law.

“The FOIA also seeks any internal documents or guidelines used by the U.S. Department of Justice to evaluate how they determine that one state’s election law allegedly violates the law, while the same provision enacted in another state does not violate the law. The FOIA requests any communications since November 3, 2020,” the press release said.

“Raffensperger’s FOIA calls for the release of communications between the U.S. Department of Justice and 62 individuals and organizations, including Stacey Abrams, Fair Fight Action, the ACLU, the Southern Poverty Law Center, and Perkins Coie, a law firm that represents Democrat political groups in voting cases.”

Representatives from the ACLU, the Southern Poverty Law Center, and Perkins Coie did not return The Star News’ requests for comment.

U.S. Justice Department officials announced on their website in June that they filed a lawsuit against the State of Georgia, the Georgia Secretary of State, and the Georgia State Election Board over SB 202, which Gov. Brian Kemp signed into law in March. The United States’ complaint challenges provisions of SB 202 under Section 2 of the Voting Rights Act.

Writers for The Wall Street Journal (WSJ) as well The Federalist have published pieces that told U.S. Attorney General Merrick Garland that his case against Georgia’s voter integrity law is destined to fail.

The writers also told Garland that he’s better off abandoning the case.