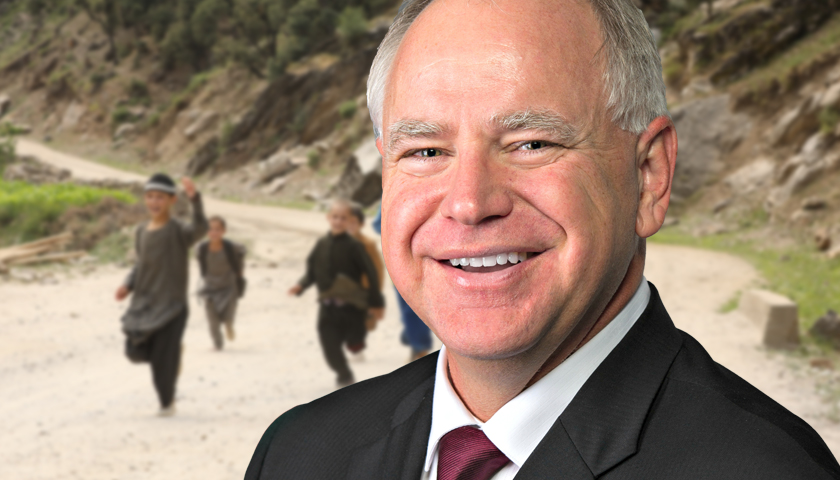 In a letter to President Joe Biden, Minnesota Governor Tim Walz (D) said that Minnesota is eager to welcome Afghan refugees. Walz said that Minnesota will be “providing the stable foundation they need to rebuild their lives, achieve their highest potential, and contribute to our state.”

Minnesota has a strong tradition of welcoming refugees and supporting them as they rebuild their lives and become part of our communities.

Our state stands ready to work with @POTUS to welcome families from Afghanistan as our effort to provide safety and refuge continues. pic.twitter.com/UyHREAqaGH

In the letter, “Governor Tim Walz and Lieutenant Governor Peggy Flanagan underscored their commitment to working with the federal government to continue Minnesota’s long history of welcoming refugees by assisting with the resettlement of Afghan individuals and families.”

Lieutenant Governor Peggy Flanagan said in a tweet that she is proud of “our state’s firm belief that all people deserve respect, safety, and dignity.”

I am proud of our state’s firm belief that all people deserve respect, safety, and dignity. We are ready to welcome those from Afghanistan who seek refuge to rebuild their lives and achieve their highest potential in Minnesota. pic.twitter.com/5AZeWppKoC

The letter to President Biden from Gov. Walz says that, “Minnesota is eager to uphold that tradition by welcoming families and children and providing the stable foundation they need to rebuild their lives, achieve their highest potential, and contribute to our state.”

He goes on to say that refugees are “our neighbors,” saying, “New Minnesotans strengthen our communities and contribute to the social fabric of our state.”

“We stand ready to work with you and your administration to welcome families as this effort to provide safety and refuge continues,” Walz finished by saying. Officials estimate that there are over 88,000 Afghanis who worked for the United States, including their family members, who are in need of special immigrant visas and evacuation.

Walz joins several other state governors who have said that they will host Afghan refugees fleeing the Taliban who took over Kabul after Biden withdrew American troops from Afghanistan.

The offer for help has been bi-partisan, with both Republican and Democrat governors from over eighteen states stepping up and offering to resettle fleeing Afghanis. Those states include Oklahoma, Arizona, Wisconsin, and others. Other governors have criticized Biden’s withdrawal from Afghanistan and his move to resettle Afghan citizens in the United States.

One major critique came from South Dakota Governor Kristi Noem (R), saying “The priority should be getting all Americans and the Afghans who served alongside us out of the country.” Noem went on to say that the Afghan residents that are being evacuated need to be thoroughly vetted, and said she doesn’t “currently have confidence in the Biden Admin’s vetting process.”

The priority should be getting all Americans and the Afghans who served alongside us out of the country quickly & safely. After that, we need to thoroughly vet those Afghans before they come to America. I don't currently have confidence in the Biden Admin's vetting process.