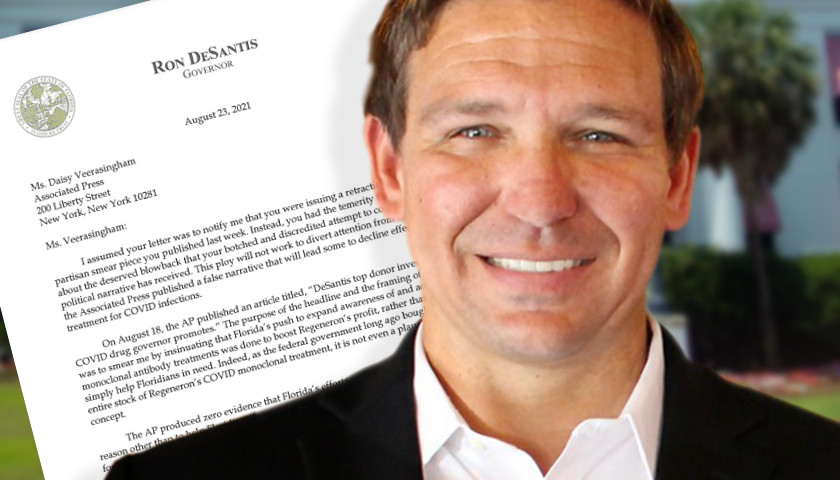 After Florida Gov. Ron DeSantis’ press secretary was suspended from Twitter and the Associated Press (AP) sent a letter criticizing DeSantis, DeSantis responded with his own letter to the AP saying they deserved a little pushback against the AP’s “smear” tactic.

“I assumed your letter was to notify me that you were issuing a retraction of the partisan smear piece you published last week,” DeSantis wrote. “Instead, you had the temerity to complain about the deserved blowback that your botched and discredited attempt to concoct a political narrative has received. The ploy will not work to divert attention from the fact that the Associated Press published a false narrative that will lead some to decline effective treatment for COVID infections.”

DeSantis also noted the attempted tie between DeSantis and Regeneron in the article, and flatly denied any such pay-to-play scheme.

“The purpose of the headline and the framing of the story was to smear me by insinuating that Florida’s push to expand awareness of an access to monoclonal antibody treatments was done to boost Regeneron’s profit, rather than to simply help Floridians in need. Indeed, as the federal government long ago bought the entire stock of Regeneron’s COVID monoclonal treatment, it is not even a plausible concept.”

The impetus of the spat between DeSantis’ office and the AP began after the AP posted a story last week insinuating of a possible pay-to-play bargain between DeSantis and Regeneron, the company behind the monoclonal treatment therapy which DeSantis has been touting for weeks.

In the article, the AP ties DeSantis to Ken Griffin who is CEO of Citadel, a Chicago-based hedge fund, which owns over $15 million of shares in Regeneron.

“Citadel, a Chicago-based hedge fund, has $15.9 million in shares of Regeneron Pharmaceutical Inc., according to filings with the U.S. Securities and Exchange Commission. Citadel CEO Ken Griffin has donated $10.75 million to a political committee that supports DeSantis — $5.75 million in 2018 and $5 million last April.”

Once the article dropped, DeSantis’ press secretary, Christina Pushaw, took to Twitter to launch a series of tweets defending DeSantis and denying any claim of pushing monoclonal treatments to assist in Regeneron’s revenues.

“The issue is that most people only read the headline,” Pushaw said. “I have an issue with the headline because it frames it up as though there’s pay to play going on or a conflict of interest when there is not, and he admits as much in the article.”

Pushaw was suspended from Twitter after posting “abusive” behavior, but Twitter has yet to say which tweets were in violation of Twitter’s rules.

Twitter confirmed to Fox News that DeSantis Press Secretary @ChristinaPushaw's account "has been locked for 12 hours for violating the Twitter Rules on abusive behavior" amid the dustup w/ the AP.

The letter the AP sent to DeSantis implored him to “eliminate this attack strategy from your press office,” after Pushaw allegedly directed an “online mob” to threaten the author of the AP article, Brendan Farrington. Farrington claims he woke up to death threats on Twitter stemming from Pushaw’s followers.

The @AssociatedPress is writing @GovRonDeSantis today re: his press secretary, @ChristinaPushaw, and her "direct effort to activate an online mob to attack" a @FLPressCorps reporter. "We call on you to eliminate this attack strategy from your press office," the AP's exec VP asks. pic.twitter.com/ghyK7Lwy2K