Commentary: The Woke Road to Kabul 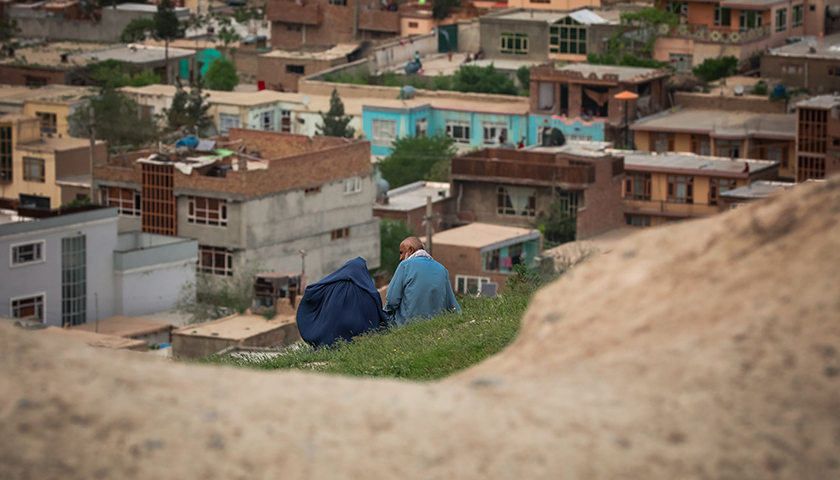 If stagflation, rising urban crime, and a weak Democratic president did not remind us enough of the 1970s, we now have our very own fall of Saigon.

To the astonishment of many naïve observers, especially those among the polite and orderly caretakers of America’s decline (for whom I suggest the acronym “POCAD”) now so foul misplaced atop our discredited foreign policy establishment, Afghanistan’s Taliban shrewdly—and predictably—waited until U.S. forces had nearly completed their withdrawal from the country before launching a massive offensive that has conquered almost all before it.

Outside Kabul’s precariously held airport, the capital has fallen. Afghanistan’s president Ashraf Ghani fled the country and was within a matter of hours replaced by a Taliban mullah. U.S. diplomats destroyed the secret papers (and, reportedly, images of the American flag) while pusillanimously begging the new regime not to attack the embassy, over which the colors no longer fly. Taliban fighters are joyfully lounging in captured bases where they have won huge caches of American military hardware for use against their doomed countrymen, or to supply whatever other terrorist groups take refuge with them.

The Biden Administration rushed in 3,000, then 5,000, then 6,000 troops to cover a helter-skelter airlift of U.S. personnel and vulnerable Afghan allies so numerous that video shows them trying to hold onto C-17 military transport planes rather than the traditional helicopters.

The blame game has already started to assign responsibility for this catastrophic blow to American power and prestige.

Is it the fault of Donald Trump, whose administration negotiated what many regard as a one-sided agreement that ceded the initiative to the Taliban by announcing a unilateral intent to withdraw?

Is it the fault of Joe Biden, who implemented the agreement on a hasty schedule that publicly named the exact and highly symbolic date by which America would withdraw, ignored evolving and diligently reported strategic realities on the ground, and coincided with the most favorable campaign conditions for the Taliban?

Is it the fault of Afghanistan’s fallen government, headed by the newly exiled Ghani, an American University of Beirut graduate with a Columbia Ph.D., which squandered some $1 trillion in U.S. aid over the past 20 years only to find itself defenseless and abandoned before the very same enemies who were removed in 2001?

Should we blame our shifty military, security, civil society, and media elites, who systematically lied about their supposed achievements in order to keep a gravy train of budgets, grants, and consultancies flowing in what they hoped would be perpetuity?

Do we drag elderly neoconservatives out of their worthless think tanks and ridiculous Weekly Standard successor publications to berate them for thinking that they could create a Madisonian democracy by loudly declaiming the Federalist Papers into the caves of Tora Bora?

All are culpable to one degree or another, and their finger pointing will bore us as the chattering classes churn through yawn-inducing New Yorker features, latte-fueled far-left Atlantic diatribes, and soporific CNN specials, with the usual cast of self-proclaimed “experts” offering contrived “fresh takes” that they will claim to have known all along?

No serious investigation will trouble official Washington. The top brass in the Pentagon, who are looking moon-eyed at deep troughs of post-retirement consulting and directorship cash, have way too much to lose.

Congressmen who couldn’t be bothered to examine a largely pork-barrel, trillion-dollar domestic infrastructure bill last week will scarcely wonder about $1 trillion dumped down a faraway rabbit hole over the past two decades, especially if investigating means having to admit that they were easily fooled for longer than many of our recently withdrawn troops have been alive.

Meanwhile, the president is marking our biggest strategic setback in half a century by vacationing at Camp David.

As Biden hides from reporters with tough questions that he probably lacks the cognitive ability to answer, and his feckless military chieftains demoralize our remaining armed forces with critical race theory instruction and contemplate the causes of “white rage,” POCADs up and down the totem pole continue to preen “woke” values that have long made a mockery of any realistic attempt to deal with the Taliban.

Already coursing unchecked through academic, institutional, and cultural life, critical theory has infected security policy as well. It is now almost unthinkable for the standard Washington wonk not to have been required to learn that his/her/their country is racist, imperialist, and generally bad, and that radical Islam is merely a natural and even deserved response to “Western aggression.”

Through that pernicious lens, the Taliban, which created and will now restore a brutal medieval theocracy, must be seen and addressed as a rational actor with a valid point of view. Rather than extirpated, the POCADs feel it should be engaged and treated with respect and even empathy. To do otherwise, they believe, would be racist and wrong, a reprehensible “othering” of what they consider an equally valuable branch of our universal human family, whose natural state is, of course, peace and harmony.

Is it any wonder that Ross Wilson, now in his final hours as our acting ambassador in Kabul and arguably one of the most inept diplomats in American history, could spend the last 10 days tweeting appeals to the Taliban to “respect human rights” while professorially cautioning that their violent ways “have never been sustainable forms of governance” and will only lead them to suffer “international isolation?”

His boss, Secretary of State Antony Blinken, hummed the same tune, less-than-heroically tweeting that he found reports of Taliban mass killings to be “deeply disturbing.”

House Speaker Nancy Pelosi unconvincingly praised Biden for his “wisdom” while intoning to equally little effect that “the world is watching” the Taliban’s actions.

And did we really hear White House Press Secretary Jen Psaki (who is apparently “out of the office” this week) suggest that the Taliban should worry about their future image in the international order, presumably lest they feel embarrassed at cocktail parties?

Even lower-grade fools like Jennifer Cafarella, a national security fellow at the Institute for the Study of War, whose board includes Bill Kristol and David Petraeus among other GOP establishment has-beens, posted recommendations that her colleagues “not share images . . . likely to cause trauma,” and to “reach out” if they experience emotional “trauma” in their cubicles (or, more likely these days, their parents’ basements), and prevent “triggering PTSD symptoms” by, for example, “avoiding the news.”

So much for the quality of today’s conservative policy community, but by every measure of today’s milquetoast D.C. values she is in store for a long and prosperous career in national security.

One hopes that stronger and more stable people may one day lift two decades of American foreign policy out of humiliation and ruin, but until they do the Taliban’s triumphant road to Kabul will remain paved with woke intentions.

Paul du Quenoy is president of the Palm Beach Freedom Institute. He holds a Ph.D. in history from Georgetown University.