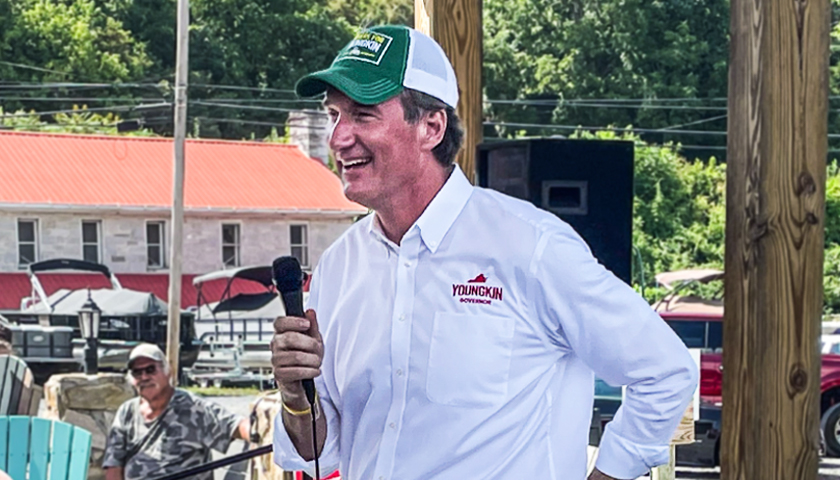 CLAYTOR LAKE, Virginia – Republican nominee for Virginia Governor Glenn Youngkin railed against the McAuliffe-Northam mask mandates at a rally in Pulaski County on Saturday. After the event, Youngkin sat down with The Virginia Star to discuss school mask mandates.

Earlier in the day, Youngkin, along with the statewide Republican nominees for Lt Gov. and Attorney General Winsome Sears, Jason Miyares, made their usual campaign speeches – but with one noticeable addition.  All three GOP candidates pounced at the opportunity to attack Virginia Governor Ralph Northam and his predecessor, Democratic nominee for Governor Terry McAuliffe on mask mandates in schools.

Earlier in the week, Youngkin said:

With today’s student mask mandate announcement, Ralph Northam, Terry McAuliffe and Richmond liberals have made clear that they will stop at nothing to impose their will and take away parents’ ability to decide what’s best for our kids. Make no mistake about it, this mask mandate is the first step towards returning to a full shutdown of our economy.

We must respect parents’ right to decide what is best for their own children. If parents, teachers, and children want to wear a mask, they absolutely should do that, but there should not be a statewide school mask mandate.

In addition to his opposition to statewide school mask mandates, Youngkin has repeatedly expressed his objection to vaccine passports and vaccine mandates. Youngkin has chosen to get the vaccine and believes that Virginians have the right to decide for themselves whether or not to get vaccinated based on their person circumstances.

Youngkin also appeared on CBS 6 earlier in the week to discuss mask mandates, vaccine passports, and other COVID-19 issues.

I would not have a vaccine passport. I don’t believe in it. I think people should get the vaccine. I have actually been vaccinated, because it was a decision I made about my own health and my families health. I would encourage every who can get the vaccine to get it, but people have to make their own decisions on this.

Overlooking Claytor Lake, Glenn Youngkin added to his criticism of the Northam administration’s school mask mandates. The gubernatorial candidate told The Star, “We can in fact keep people safe, keep the economy open, and keep schools open and keep moving. This is what we have to do in Virginia. We have got to get our schools open five days, in-classroom education, five days a week. That’s just critical, it’s not just the learning gap, it’s the emotional challenges, the challenges for families to get people to work. We have got to get families back to school five days a week.”

Youngkin said that while he would do “absolutely” do everything in his power to keep Virginia open, he said he believed that under the former Governor and Clinton confidante McAuliffe the people of Virginia would again “be back in lockdown territory.”

I think he would impose his will on our schools. He thinks the teacher’s unions should be running everything. It’s his biggest donor outside the Democratic Governor’s Association. He absolutely said nothing about when our schools were opened last year. He [McAuliffe] was the first one to come out and say that we should mask mandates. And no parent needs to be told what’s best for their child. We have to trust parents, they know what is best for their children, and allow them to make those decisions. And as Governor, I am not about to impose my will on those families. I’m going to allow families to make those decisions.

“And oh, by the way, we are going to keep the economy moving.

“So yeah, no lockdowns with Youngkin,” he said.

Matt Colt Hall is a reporter for The Virginia Star and The Star News Network. Follow Matt on Twitter at @MattColtHall on Twitter. Send tips to mattcolthallreports@gmail.com.