‘Voters Not Politicians,’ Which Rebuked Michigan Redistricting Commission for Hiring Republican Firm, Has Its Own Partisan Ties 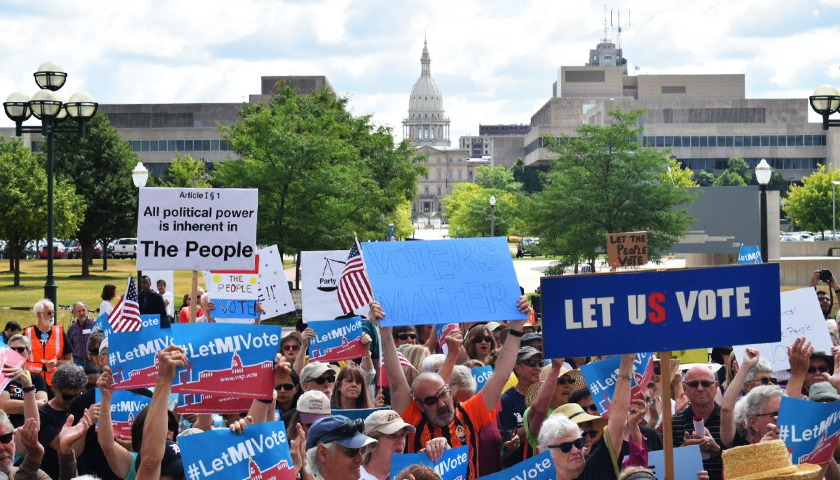 The nonprofit Voters Not Politicians (VNP) has stridently criticized the Michigan Independent Citizens Redistricting Commission (MICRC) for hiring a GOP-aligned law firm, but VNP’s own leftist agenda and political ties are getting little media attention.

The Lansing-based “nonpartisan” organization spearheaded the Proposal 2 referendum which created the MICRC to oversee legislative and congressional redistricting free of gerrymandering.

A report in Bridge Michigan magazine Thursday underscored VNP’s objections to the 13-member MICRC hiring E. Mark Braden of the D.C.-based firm BakerHostetler as litigation counsel. The nonprofit has castigated BakerHostetler for defending political maps in the past that courts eventually struck down as gerrymandered for the benefit of Republicans. According to Bridge Michigan:

The selection was controversial because Braden is not only one of the most experienced attorneys on redistricting in the nation, but is also the former chief counsel to the Republican National Committee.

Braden and BakerHostetler served as litigation counsel for Pennsylvania and defended the state’s 2011 congressional plan that was found unconstitutional by the Pennsylvania Supreme Court in 2018 because it was biased towards the GOP.

The firm also represented the Republican legislature of North Carolina in a challenge to its congressional and state legislative maps. The plans were found unconstitutional by multiple courts and in 2019 lawmakers were ordered to draw new ones.

Jamie Lyons-Eddy, VNP’s deputy director, said in a statement that the hiring of BakerHostetler fails to avoid “the appearance of conflicts of interest and partisan bias.” But while VNP is itself nominally nonpartisan, members of the advocacy group’s staff and board of directors have work histories with numerous liberal politicians and interest groups. A review of each staff and board member’s professional biographies reveals no comparable ties to Republicans or conservatives.

VNP’s board chair, Lisa Wozniak, is currently executive director for the Michigan League of Conservation Voters, a group that gave 66 of its 71 candidate endorsements in 2020 to Democrats, and is a former campaign aide to state Senators Lana Pollack (D-Ann Arbor) and Alma Wheeler (D-Ann Arbor).

The group’s board secretary Kevin Lignell is head of communications strategy for SEIU Healthcare Michigan, the largest healthcare union in the state.

VNP’s development director, Melissa Horste, worked in the Lansing office of the late Senator Carl Levin (D-MI) and as legislative director for then-state Representative Andy Schor (D-Lansing), who is now mayor of Lansing.

Board member Seth London got his start in politics working for the late Senator Edward M. Kennedy (D-MA). He later worked for Barack Obama’s 2008 presidential campaign. Another board member, Jack Schmitt, served as chief of staff to state House Democratic Leader Sam Singh (D-East Lansing) and previously worked as deputy director of the Michigan League of Conservation Voters. A third board member, Dana Thompson, is a former member of ex-Governor Jennifer Granholm’s (D-MI) emerging Small Business Leaders and Entrepreneurial Council.

The group, furthermore, has taken left-wing positions on matters of policy. VNP opposes Republican-sponsored election-security legislation in Michigan and elsewhere. Its executive director Nancy Wang has also publicly supported H.R. 1, the “For the People Act,” which is an election and campaign-finance reform bill in Congress with exclusively Democratic congressional support that has even been opposed by the ACLU.

When asked about MICRC’s hiring of BakerHostetler and about VNP’s own partisan ties, VNP spokesperson Angela Minicuci referred The Michigan Star to the statement quoted in part above, without addressing the latter issue.