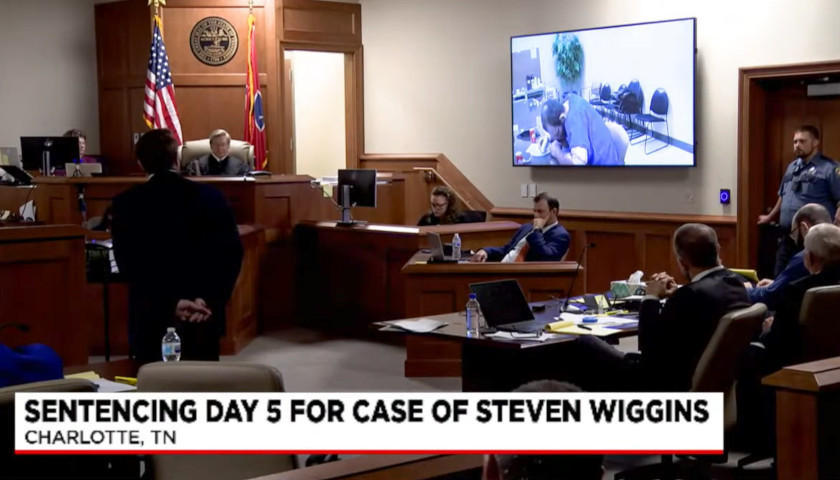 Earlier that day, District Attorney General Ray Crouch and defense lawyer Luke Evans presented their closing arguments to jurors, who were tasked with deciding between the death penalty and life imprisonment without the possibility of parole.

“Steven Wiggins killed Sergeant Baker without excuse, that’s true,” Evans said. “There’s no getting around it. And it’s awful.”

The defender went on to describe the congenital brain damage Steven Wiggins sustained as a result of his mother, Juanita Wiggins, being beaten by his father, Scott Wiggins, while she was pregnant. Evans also went over evidence that the defendant was himself beaten and sexually abused by his father as a boy.

“The truth of the matter is, that man never had a chance,” Evans said. “It doesn’t excuse what he did. It doesn’t mean he didn’t do it. … From the minute he came into this world, he entered a world full of terror.”

Crouch, during his presentation, played body-camera footage of Steven Wiggins’s encounter with Baker who was attempting to apprehend Steven Wiggins for suspected vehicle theft. Earlier that day, Evans had attempted, to no avail, to persuade Judge David D. Wolfe to disallow the re-airing of that footage as “unduly prejudicial.”

The bodycam material demonstrated that Steven Wiggins, after shooting Baker dead, had fired a final shot after he had left his car, which the prosecution said was fired into the slain officer’s head. That action belied a claim Steven Wiggins made to mental-health examiners after being taken into custody, wherein he said he tried to give Baker chest compressions and to check his pulse.

“What you heard a lot of this week sounded like ‘State of Tenessee vs. Scott Wiggins,’” the prosecutor said, adding that the jury’s job isn’t to evaluate Steven Wiggins’s father but “to weigh and measure the defendant and his actions.”

Crouch noted that Steven Wiggins was away from his father for 17 years before he killed Baker. He went over evidence that Steven Wiggins was a skilled plumber who earned his high-school equivalency and fathered a child, all of these points speaking to the man’s mental competence, something the defense called into question throughout the trial and sentencing.

Also that day, Crouch noted that the defendant had five active warrants against him and had killed Baker during the latter’s proper execution of his duties. He furthermore called jurors’ attention to Wiggins having set Baker’s patrol car on fire with the officer’s body in it, leaving many second-degree and third-degree burns on the officer.

Bradley Vasoli is a reporter at The Tennessee Star and The Star News Network. Follow Brad on Twitter at @BVasoli. Email tips to bradvasoliwriter@gmail.com.
Photo “Steven Wiggins Trial” by News4 WSMV Nashville.