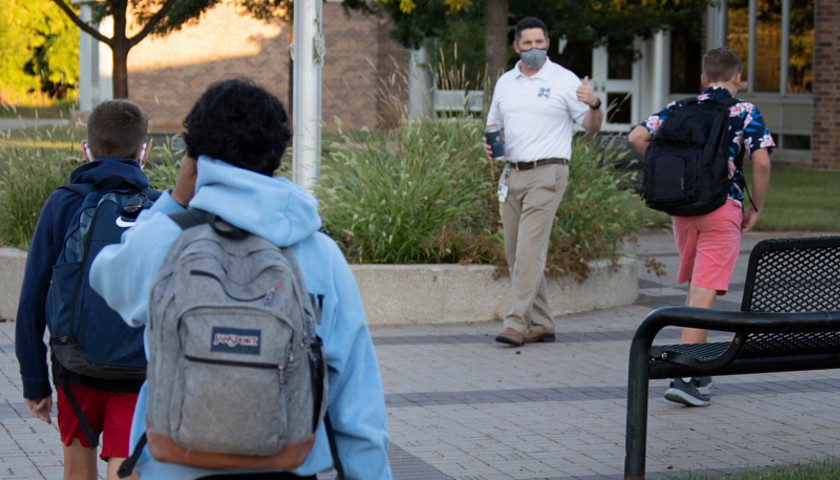 A group of Michigan parents was asked to fork over approximately $400,000 by the Forest Hills Public Schools before the district would comply with a Freedom of Information Act request they had submitted. The district later lowered the cost to about $2,200.

The FOIA was sent to FHPS on May 11. The request sought “any and all writings” that used such words as equity, diversity and inclusion.

When told responding to such a broad FOIA request could take more than a year to complete at a cost in the $400,000 range, the FOIA was scaled back to read: “Any and all writings since March 1, 2020 through the date of this Request that reference the words or phrase ‘critical race theory’”….

When told FHPS compliance with the FOIA would be exorbitantly expensive, the parents resubmitted their FOIA on May 18, narrowing their request to include only documents mentioning CRT created by FHPS staff, school board members, and Northern Hills Middle School Principal David Simpson. School authorities responded it was “impossible to eliminate” students from the search, so the tab still hovered above $400,000.

In July, the FHPS Technology department acknowledged it had made an error when it submitted a search for “critical racism theory,” which it rectified to the originally requested “critical race theory.” The result was approximately 2,000 emails, with about 1,930 staff emails.

FPHS explains their  FOIA policy  on the district’s website: “In calculating the cost of labor incurred, the District can charge the hourly wage plus up to 50% to the applicable labor charge to cover the cost of fringe benefits associated with that labor, of the lowest paid employee capable of performing the task. The labor costs are estimated and charged in increments of fifteen (15) minutes, with all partial increments rounded down.”

The bill subsequently was reduced to $2,197, and the parents have mounted a GoFundMe campaign to raise the money after FHPS repeatedly refused to waive the fee. As of Thursday afternoon, contributions tallied $2,435.

“The policy behind FOIA is that the public is entitled to full and complete information so that they may fully participate in the democratic process,” Mackinac Center for Public Policy Vice President for Legal Affairs Patrick Wright told The Center Square. “That policy applies no matter how controversial the underlying government action is.”

The conflict between the parents and FHPS has been ongoing, with parents alleging the FHPS board has deliberately avoided transparency with parents by scheduling committee meetings when most parents were still working.

A request to conduct Zoom meetings, which could also be recorded for streamed viewing at a later time, was denied by FPHS Board President Mary Vonck.

“Recording meetings … affords our community no additional access to board business than is currently available through agendas and minutes,” Vonck wrote in an Aug. 6, 2021, email shared by FPHS parents with The Center Square.

“Yet, the resources required to record and post meetings is significant,” Vonck wrote. “We therefore encourage our community to visit the district website for full access to all board business.”

Brink also told The Center Square FPHS school board meetings have been held at 7 p.m. for at least the past 11 years.

The rancor between parents and the school board escalated after a video production was shown to students on the Martin Luther King, Jr., national holiday in February. According to Schellenberg, the video was produced in part by students participating in the school’s Global Learning Initiative.

“It was really outrageous,” Schellenberg told The Center Square. “It was a CRT primer that discussed white privilege,” she said, referring to the controversial theory individuals with white skin inherently enjoy social and economic advantages denied individuals of color. “There was no balance, no counterpoint. It was all social justice propaganda. There’s no way students did that on their own.”

She said all attempts made by parents to discuss the matter with school officials were dismissed or, in other instances, “we were patted on the head and scooted away.”

Wagner told The Center Square she had moved her family from East Kentwood to Forest Hills because she felt her children’s education would be better. “It sickens me, because now it’s apparent Forest Hills is teaching my kids stuff behind my back,” she said.

Schellenberg and Wagner also noted they took issue with some of the reading material assigned to their children, and the FPHS refusal to share copies of some of the health and sex education curriculum.

“They wouldn’t email it to us or otherwise make it available for us to inspect. We weren’t even allowed to visit the school to make copies of some of the material, but some of what we did see was on Planned Parenthood letterhead,” Wagner said.

Schellenberg read some of the class reading material her daughter brought home from school and found it sexually graphic in nature.

“Every time we try to find out what they’re teaching our children, we’re stonewalled,” she said.

The Center Square sought comments by a phone call to the FHPS school board as well as an email sent to Simpson. The school board did not respond, but Simpson directed the media request to FPHS Communications Director Elizabeth Brink.

“We tried to be cooperative,” Brink told The Center Square. “But I don’t think it’s reasonable to expect us to use staff and resources to answer such a large request. We worked with the individual who submitted the FOIA to find out what he was looking for specifically. It ended up significantly lowering the costs of compliance.”

Brink said FHPS would begin work on complying with the FOIA once the $2,197 check is received, which she anticipates will happen this week. “That’s the price we quoted, but it will take far more time and resources to fulfill the request,” she said.

Bruce Walker is a regional editor at The Center Square. He previously worked as editor at the Mackinac Center for Public Policy’s MichiganScience magazine and The Heartland Institute’s InfoTech & Telecom News.
Photo “School Day at FHPS” by Forest Hills Public Schools.